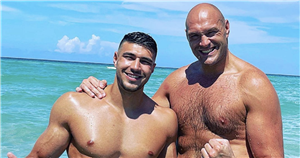 But being the sibling of someone so well known in the industry has meant made it harder for Tommy, 23, to prove himself as a boxer in his own right, especially as he has a two-time world heavyweight champion in the family.

Tommy has also had to deal with the criticism of the brothers’ dad John Fury, whose comments sometimes haven't been too helpful. He once also walked out on his son during training. We take a look at the rocky relationship between the Fury men…

Tommy, who is loved up with fellow IslanderMolly-Mae Hague, previously fell out with his dad over his attendance of hisgirlfriend’s mum’s wedding in 2021.

When dad John told him he wouldn’t be able to go as he should be training for a match, a bitter row ensued.

"We had a blow-up the other day," John told BT Sport's Steve Bunce. "He went to his girlfriend's mother's wedding and I told him not to go, I said 'we're in camp, if you're going to do that I'm out of here!'”

After two days away, John decided he had made his point and returned to Tommy's team.

Tyson and Tommy haven't always been close and when the younger Fury brother entered Love Island in 2019, it seemed his brother was unimpressed.

"I thought, he’s a good looking lad," confessed Tyson, 33, back in 2019. "He might get carried away being a TV reality star rather than a fighting man – and it's the last thing he needs to do when he's trying to become a professional fighter.

"I said, 'Nah, it won't be a good idea that, you’ll mess up what you’re doing in your career. You’re on a roll, keep with boxing.'"

Despite trying to discourage his brother from going on the dating series, Tyson admitted his brother was "smashing it".

Many Love Island viewers were convinced Tyson would rock up in the villa during the friends and family episode, but the boxing champ was nowhere to be seen.

Later Tyson was asked on an Instagram Q&A why he didn't go and said: "I would of (sic) loved to but I am in training camp.

"People do not realise the sacrifices made to reach the top level… not just in boxing but anything you aspire to do."

At the end of June,Tommy was forced to pull out of a fight with Jake Pauldue to visa issues entering the US with his dad hitting out and claiming his son "wasn't exactly in training".

Speaking to streaming serviceDAZNJohn, 58, said: “Tommy wasn't exactly in training. He'd only had about 10 days because he'd been on holiday and it was a surprising thing for him. I was away out of it doing these tours and being busy elsewhere so I never got the chance to look at it properly.

“When I've paid attention, I noticed the whole thing wasn't right anyway. But I said ‘Okay, it is what it is, if you want to go over there and box him, do it. You're experienced enough now and it's a 50-50 platform''.

“[I said,] 'I know you could be fitter, you're overweight, but it's entirely up to yourself because I'm busy and I can't do it.’ So, he said 'Okay then, I'll do my own thing and I'll go fight him anyway because I can beat him’.”

However, Tommy hit back at his own father's allegations by branding them "bulls***t”.

He took to Twitter and in a video vented his frustrations at social media users, but failed to acknowledge his dad was responsible for fuelling the fire: "Recently on social media I've seen more s*** on me than ever.

"I want to get one thing straight, the reason this fight didn't take place is because I couldn't get in the country, not because I wasn't training or wasn't fit. I was ready and raring to go, I was at the airport on Monday morning with my whole team, ready to fly out and get the show on the road.

"I could. not get into the country and that's why the fight didn't happen, so all this bulls*** about me not being ready and not training, forget about it. If it's not come from me, don't believe it because it's not the truth."

Threat from Tyson to take away Fury name

There was a lot of pressure on Tommy to beat Jake Paul in the ring – and it mainly came from his own family.

Tyson said he would force his little brother to change his surname if he lost to the YouTube star.

"Because he's got ambitions of being a world champion, never mind beating some YouTube guy. But it's a great fight for the social media world and for all the kids out there who support them both.

"It's a great fight to watch, it's a spectacle. But Tommy – his name's Fury. If he can't beat Jake Paul, I'll have to change his name."

If that wasn't enough, Tyson also claimed he would not allow Tommy to come home if he lost to Paul.

In November, he stated: "I think Tommy will knock him out. No disrespect to Jake Paul, but like I said to Tommy, if he can't knock Jake Paul out, fly to a foreign country and stay there because he ain't coming home."