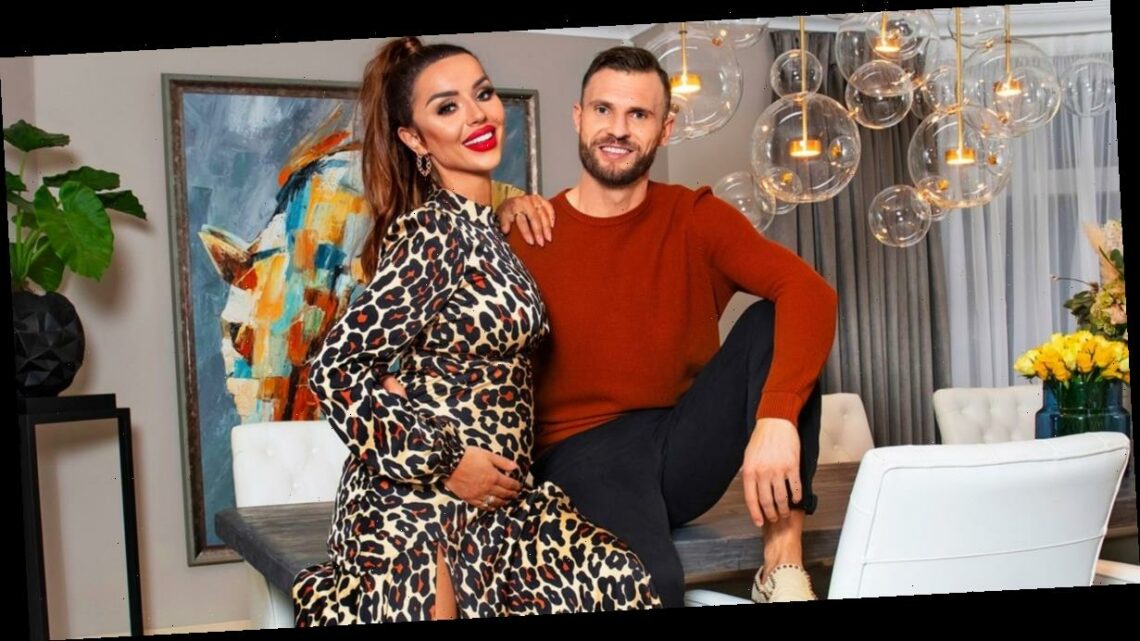 Any couple expecting their first baby will tell you it’s next to impossible to descend from cloud nine. So when we catch up with former Real Housewives Of Cheshire star Nermina Pieters-Mekic and her Dutch husband Erik at their Cheshire home for our exclusive shoot, it’s no surprise their smiles never leave their faces.

Finishing each other’s sentences and gently teasing one another throughout our chat, Nermina, 30, and Erik, 32, tell us they’re “super happy and excited” about becoming first-time parents in April.

To see the rest of these stunning images and to read the full interview, subscribe to our OK! VIP Club below – it's FREE! If you're already reading this article in full, you're already a member – congrats!

Their news is all the sweeter, considering their journey towards starting a family hasn’t been easy. After coming off birth control late last year, Bosnian-Dutch singer Nermina discovered she’d sadly miscarried during the early stages of pregnancy last November.

Doctors sent her for tests and Nermina underwent a colposcopy procedure to remove a growth on her uterus.

Once she and Burnley FC footballer Erik were given the green light to start trying again, they planned a romantic August trip to Crete. But, just one day before they were jetting off, Nermina noticed some changes in her body and took a pregnancy test – it was positive.

“It was such a surprise and we were so happy!” says Nermina, who is now 22-weeks pregnant.

Here, the happy couple, who have been married for four years and share four dogs, open up to OK! about their happy ending…

Congratulations. How are you feeling?

Nermina: We’re super happy and excited. My body’s changing and it’s getting more real. It was my 30th birthday in June and I said, “I always thought when I’m 30, I’d want to have a baby,” and a few weeks later we found out.

Erik: I’ve always wanted to be a dad from a young age. Lots of my friends have kids and I love to babysit.

Nermina: I was trying on some new bikinis for our holiday while Erik was packing. I said to him, “Did my bikini shrink?” He looked at me and replied, “Your boobs do look quite big.”

Then I realised my period was overdue. I was so convinced I wasn’t pregnant because I’d done a test a few weeks before at a hospital check-up, which came back negative. But I did it and then forgot about it. When I remembered, I checked and it said “3+” [which means she was over three weeks pregnant at the time of the test].

I thought, “That can’t be right!” Then I checked my dates again and realised I was pregnant. It was such a surprise and we were so happy!

Erik: We were really happy, but also concerned because of our history. We assessed the risk, decided to go on holiday and see how it went, but hoped that everything would be OK.

Nermina: I said the first thing I’d do when we got back was to see my GP to double check. But on holiday the sickness started and I thought, “I’m definitely pregnant!”

How bad was it?

Nermina: We were in an amazing hotel and every night I had dry pasta with a tiny bit of Parmesan cheese. I’d leave the table as the smell of the food would make me sick.

Erik: We’d go back to the hotel room, she’d fall asleep and I got to watch the Champions League.

Nermina: He quite enjoyed watching it on holiday – I don’t usually allow him to!

Nermina: Yes, I was really worried. I needed that reassurance. Erik couldn’t come in, but he was waiting outside in the car so the moment I got good news, I texted him.

Erik: It felt like she’d been in there for hours, so when I found out it was special.

Nermina: When I got into the car we gave each other a big kiss and a hug. We couldn’t believe it was finally happening.

Erik: The first time Nermina heard the heartbeat, I couldn’t be there. I was gutted. But at the 12-week scan the lady let us hear it again. It’s been such a roller coaster for us, so hearing the heartbeat for the first time together brought us even closer. After all that we’ve been through, we felt blessed.

Nermina: It was a magical moment.

How were your first weeks of pregnancy, Nermina?

Nermina: It wasn’t just morning sickness – it was also the afternoon and evening. I also got dehydrated and had bad headaches. That lasted for five weeks. It was tough as I’m usually active and like to go out with my dogs and ride my horses. Instead, Erik would go to the club in the morning and I’d be in bed miserable and crying.

Erik: It was pre-season, so I was busy with double sessions and longer days than normal, so I planned a little surprise for Nermina’s mum to come over [before lockdown]. Knowing that she was being taken care of was the main thing.

Have you found out the gender?

Nermina: We know. We were too curious not to find out.

Erik: When they first asked, we said we’d keep it a surprise. Then we received a letter with scan results and the gender attached. We debated it for about 15 minutes and thought, “We want to know now!”

Have you told anyone else?

Nermina: It’s just the two of us that know. We wanted to have a gender reveal party, but it’s not possible now [because of the pandemic]. Not a lot of people even know that we’re pregnant as we want to tell them in person. But we told our parents and family because they live in the Netherlands and Bosnia. It’s mine and Erik’s parents’ first grandchild so everyone’s so excited.

Erik: We get a text every single week saying, “Can we tell people now?” They’re so happy, especially as they know our history.

Before your happy news you had a tough journey. What happened?

Nermina: I didn’t know I was pregnant. I had my period and the bleeding continued for a third, fourth, fifth week. I knew something wasn’t right and went to the doctors.

They said I’d had an early miscarriage. Erik’s a footballer and I’m really active, so you think you’re two healthy people and it would happen quite easily, but you just never know.

Were you each other’s rock?

Erik: Definitely. I’m the only one my age in my team that doesn’t have kids, so when I heard everyone talking about their babies,
it was strange. But we knew we had to talk about how we were feeling.

Nermina: It brought us closer. We didn’t share the news with anyone else. We shared the same loss.

Does the pregnancy mean all the more considering what you’ve been through?

Nermina: We’re more excited as we’re finally having the baby we always wanted. It’s made us realise how lucky we are because we’ve been on the other side.

Nermina, you’ve opened up about your upbringing in war-torn Bosnia. Will that experience affect the way you parent?

Nermina: Definitely. I’m happy to give my child luxury and all the things I didn’t have
in my early life, but I also want to keep them grounded and down-to-earth.

Will you raise your child to be bilingual?

Nermina: That’s the goal. English will be their main language, but we always speak Dutch at home and I speak Bosnian with
my parents.

Erik: It’s really important our child is brought up to know where we come from.

Your home is amazing! What’s your favourite room?

Erik: I love the cinema room with the fish tank behind us to watch Netflix. But the living room also looks lovely with lots of crystals.

Nermina: We bought the house last year and the renovations are never-ending. We changed the whole house. It feels like a home now. The last part is the garden, which is getting finished now, and then the nursery.

Have you had any thoughts on a theme?

Nermina: I want to keep it neutral. No blue or pink, but with some nice details.

Erik: That could change though, so I’ll wait until the last minute and then paint it!

You’ve also built a bar. Are you going to throw a party when the baby arrives?

Nermina: Yes! Hopefully the rules will change and we can have a party. I’m looking forward to having champagne – I miss drink now.

Would you film an at-home reality show?

Erik: I prefer to have the cameras on the football pitch, but if Nermina wanted to, I’d support her 100%.

Nermina: We’re quite private, but we don’t mind cameras coming into our lives now and again. We don’t have anything to hide.

Is a return to The Real Housewives Of Cheshire on the cards?

Nermina: I’m still in touch with the girls. I left on a really good note, so I know the door’s open. Right now though, I’m busy with the house and the baby.

Thank you for signing-up as an OK! VIP member!