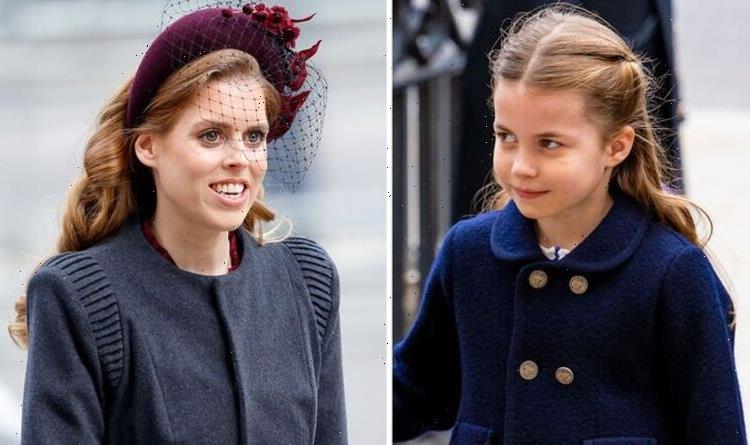 The Royal Family gathered at Westminster Abbey on Tuesday for the final send-off for Prince Philip, Duke of Edinburgh, the Queen’s beloved husband of more than seven decades. Among guests were Prince William and Kate, Duchess of Cambridge, who were joined by their eldest children Princess Charlotte and Prince George. And it seems Princess Charlotte was particularly happy to see Princess Beatrice among the royals in attendance, as an adorable moment was captured between the two during the service.

Among a sea of Royal Family members, it seems Beatrice was the only person on Charlotte’s mind as she turned to catch her attention, and Beatrice’s love for Charlotte was also evident with the beaming smile she gave her.

Speaking on behalf of Slingo, behavioural expert Darren Stanton said: “A really lovely moment occurred between Charlotte and Beatrice during the service.

“It was fascinating to see how Beatrice sensed Charlotte’s look in her direction and it suggests the two definitely share a deep bond with each other.

“From her exaggerated and mischievous smile, it’s clear Charlotte thinks a great deal of Beatrice, she wants to have her attention – it suggests the two share a fantastic friendship.”

Beatrice and Charlotte are understood to have spent some time together recently at Frogmore on the Queen’s Windsor Estate.

After the Queen completed her Covid self-isolation period, William, Kate, George, Charlotte and Prince Louis reportedly met Beatrice and her baby daughter Sienna to spend time with the monarch there.

Charlotte and Beatrice’s deep bonds are likely rooted in their shared experience, with Beatrice also growing up in the public eye due to her royal parents Prince Andrew and Sarah Ferguson.

Many a picture was taken of Beatrice and her sister Princess Eugenie attending royal events when they were younger too, and the York sisters could be quite the role models for little Charlotte.

Both Prince George and Princess Charlotte received substantial praise from commentators for their attitudes during the memorial this week.

George and Charlotte were incredibly well-behaved and looked very confident while meeting attendees with their parents.

The Sunday Times’ royal editor Roya Nikkhah said about Prince George during the BBC’s coverage of the event: “Just eight years old and getting used to line ups.

Mr Stanton added of the Cambridge siblings: “Charlotte is the more inquisitive one out of her and her brother George.

“While both were very well behaved sat next to their parents in the church, Charlotte was seen looking around at everyone.

“Taking in the no doubt, grandiose and overwhelming environment, she is probably too young to realise what it’s all about.”

Ukrainians drive over LANDMINES left behind by Russian troops