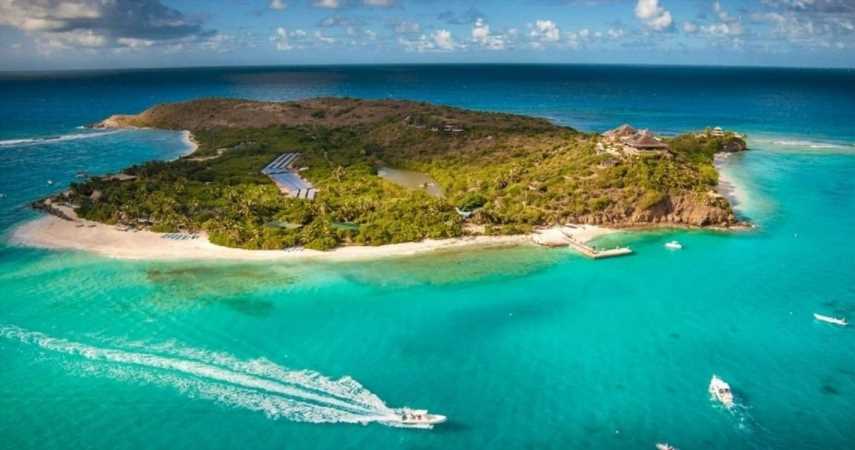 Necker Island is a private paradise owned by the British billionaire Sir Richard Branson situated in the British Virgin Islands. Although the island suffered a massive damage from the Hurricane Irma in 2017, Branson was able to restore the beauty of the island straight away. The luxurious resort which part of the Virgin Galactic closed for a few months following the aftermath of the hurricane where the buildings of the island were completely destroyed. Just about a year of closing the resort, Branson was able to open it again in October 2018.

The place is the perfect place for wealthy people to enjoy and spend quality time with their loved one. Even celebrities and prominent people have stayed on the island including Princess Diana and her young sons, former president Barack Obama who enjoyed the island after his presidency and Mariah Carey who had her girlfriends over in the island while filming MTV Cribs.

How Sir Richard Branson Bought The Necker Island At 97% Discount

The chairman of the Virgin Group bought the property for about $180,000 in 1979 but has since spent a whopping $10 million transforming the beautiful island into a luxurious resort. He first heard about the island in the 1970s and was intrigued by it. At the time, Sir Richard Branson was still starting the Virgin Records. He was interesting in owning the island and luckily the realtor ended up contacting him.

The realtor offered him to visit the luxurious and historic island and he agreed in a condition that he will be able to bring a companion with him. Since he was trying to impress a new love interest at the time he was eager to bring her to the island. Thankfully the realtor agreed and they all went to the island soon after. Upon hearing that the price for the island is $6 million, he knew right then that he could not afford it.

Since he was with a date at the time and wanted to impress her, he offered the highest amount he could afford which was $100,000. The realtor became indifferent upon hearing the price of his offer and decided to leave the pair high and dry. Branson had to find their way back home as the realtor cannot be bothered.

About a year later after the visit happened, Branson received a call from the owner of the Necker Island. The owner wanted to sell the island so bad but had not received any offer other than Branson’s offer. That time, Branson was already in much better financial position thanks to the Virgin Records so when he was offered to buy the island for $180,000, he did not hesitate to take it.

Sir Richard Branson’s private island named Necker Island is located on the British Virgin Islands along the unspoiled area of the Caribbean and just north of the Virgin Gorda. The Necker Island owned by one of the richest man in United Kingdom has 74 acres and sits on the beautiful turquoise waters combined with stunning sandy beaches. The massive island is entirely owned by Sir Richard Branson but it is also part of the luxurious portfolio of properties owned by Virgin Limited Edition.

The entire island also operates as luxurious resort that can accommodate about forty adult guests with six children. A one night stay at the private Caribbean island costs about $107,500 for 20 rooms that can house 40 people. The price can go up to $128,000 per night if the guests decided to take up the entire 24 rooms in the island that can house about 48 guests.

The Balinese inspired resort has set an extremely high standard for a serene and luxurious tropical vacation. The scenery in the island ranges from some stunning coral reefs to some vista-rich hilltops. The island checks every box of a perfect luxurious island getaway from the beachfront dining to some spa relaxation to various water sports.

With the massive amount of a nightly stay, the guests can make themselves at home on the entire island. The island has a rather low-key vibe that is perfect for relaxation and finding serenity rather than partying and getting black out drunk. The ambiance on the island is more at ease compared to other tropical and luxurious resort.

All The Luxuries On The Island

The island is strategically designed with every feature near each other but the island does not feel cramped. It can satisfy every type of adventures from a hidden away beach relaxation to some high adrenaline fun activities. The island offers the guests an exhaustive source of Caribbean joy

The accommodations available at the island include the Great House which has one master suite, eleven guestrooms and a bunkhouse that can house up to six children. Aside from the main house, there is also eight Bali houses and a Temple house which has about four bedrooms. The island is perfect for a large family but can also host small family since villas or rooms can be booked individually however it’s only available for individual booking during special holiday week.

There is a staff that will be available to serve the guests on the island. Food is not a problem since there are dining options available at the Great House, Turtle Beach and The Beach Pavillion. The Bali Samudra house can also host some spa treatments from the guests. Water sports such as kite boarding, snorkeling, scuba diving, and more can be availed as well. Fitness enthusiast will also be entertained since there are hiking and yoga available at the resort.