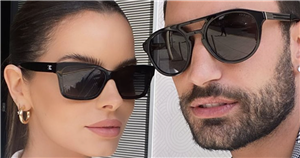 Love Island star Maura Higgins has given a glimpse inside her romantic getaway with Strictly Come Dancing professional Giovanni Pernice.

The 30 year old, who recently showed off new chic bob in a short hair transformation, looked very loved-up as she shared a selfie with her professional dancer beau, 30, ahead of their romantic London staycation.

Maura looked chic with her brunette locks parted into a sleek centre style and donned a crisp white blazer alongside Giovanni who looked very smart in a Prince of Wales check blazer.

The couple started the romantic getaway with lunch at private member's club Harry's Bar before heading to the luxurious Shangri-La at The Shard in London.

The five-star hotel, which boasts a superior room for an average of £575 per night, features panoramic views of the capital along with a spa and restaurant in the clouds.

Maura shared a snap of a message on the window of their suite, which read: "Dear Ms Higgins and Mr Pernice. Welcome to the clouds! Wishing you a magical stay."

The brunette beauty later shared a look at their evening meal which featured her 'absolute favourite' dish of beef carpaccio.

Maura later gave her 3.3million followers a look at the panoramic view from her suite as the sun set over the capital.

The former reality star and Giovanni had first been linked earlier in the year after Maura split from Chris Taylor.

Rumours flew as both Maura and Giovanni posted incredibly similar photos from the Italy vs Austria football match at the 2020 Euros.

Maura was then spotted in attendance at the opening night of Giovanni’s dance tour, with an insider saying that the pair were “smitten” at the after-party.

Speaking to The Sun, the insider said: “They looked totally smitten with each other,

They were being very touchy-feely and had a smooch on the dancefloor.”

They finally confirmed their relationship last month as they posted matching photos to their accounts of them snuggled up with the caption: “I’m yours.”

A source speaking to the Mail Online said: “Everyone know he's played the field in the past but he is serious about Maura.

“He's smitten with her, they've become close really quickly and are spending a lot of time together in Blackpool.

“She's become pals with all of the cast and crew of Him and Me too and they think she's great. Maura has also met Anton and they got on brilliantly.”

Maura had been in a six-month relationship with Chris Taylor before they confirmed their split in May.

The beauty has also previously dated Curtis Pritchard after the pair got together on Love Island, leaving the villa together after entertaining audiences throughout.

Giovanni has had previous relationships with two of his co-stars from Strictly Come Dancing, Ashley Roberts and Georgia May Foote.