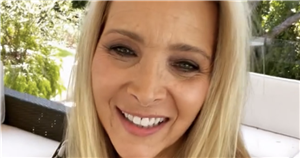 When Phoebe Buffay wasn't singing Smelly Cat or having a weird sibling rivalry with twin Ursula on Friends, she was wowing us with her hilarious charm on the sitcom.

The popular character is played by actress Lisa Kudrow, 57, who has gone on to have a little more success than Phoebe did with her singing career.

And she has a stunning home to show for it, where she lives with her husband Michel Stern and their 23 year old son Julian.

The gorgeous property was purchased by the star in 1996 for $1.6 million and it sits in Los Angeles.

Successful actress Lisa also has a second home in Palm Springs, but she spends the bulk of her time at her LA home, and we can hardly blame her – it’s stunning!

Speaking in a recent video, it was possible to see a glimpse of Lisa’s gorgeous outdoor area, with large white seats for reclining, and lots of greenery as a backdrop.

She also took a snap of her cute dog with a toy on her kitchen island and it’s very chic in a beige colour with bright orange seats tucked in beneath it.

The star’s kitchen is also visible in the snaps and it’s large and boasts state-of-the-art appliances and mahogany cupboards.

Lisa’s living room is the perfect spot to tuck into a few episodes of Friends, and Lisa did jus that as she shared a snap while watching reruns on her big TV.

The living room has beams on the ceiling and white alls and there’s a stylish cabinet sitting beneath the television with various decorations on.

Moving through to the dining room, it’s just as specious and glamorous as you’d expect, with a big statement table in the middle and orchids sitting on top.

Another peek inside Lisa’s abode occurred when she popped up on Jimmy Kimmel Live from her snug home office.

Behind her sat trinkets galore, including Friends memorabilia such as figurines of the six cast members and a Cookie Time jar which featured in Rachel and Monica's apartment.

Friends fans are currently excited about the reunion episode of the show, set to air over in the USA on 27 May.

You can also catch it in the UK as Sky One are showing it on May 27 at 8pm too.

A trailer for the hotly anticipated get-together showed the stars return to the studios where they filmed 236 episodes over ten years.

They visit the Hollywood studios and recreate the famous Friends quiz from season 4 which saw Joey and Chandler win Monica and Rachel's apartment.

At one point, emotional Cox wipes a tear from her eye while Aniston puts a comforting arm around Perry. The clip ends with the stars hugging and Aniston saying: "I love you guys so much."