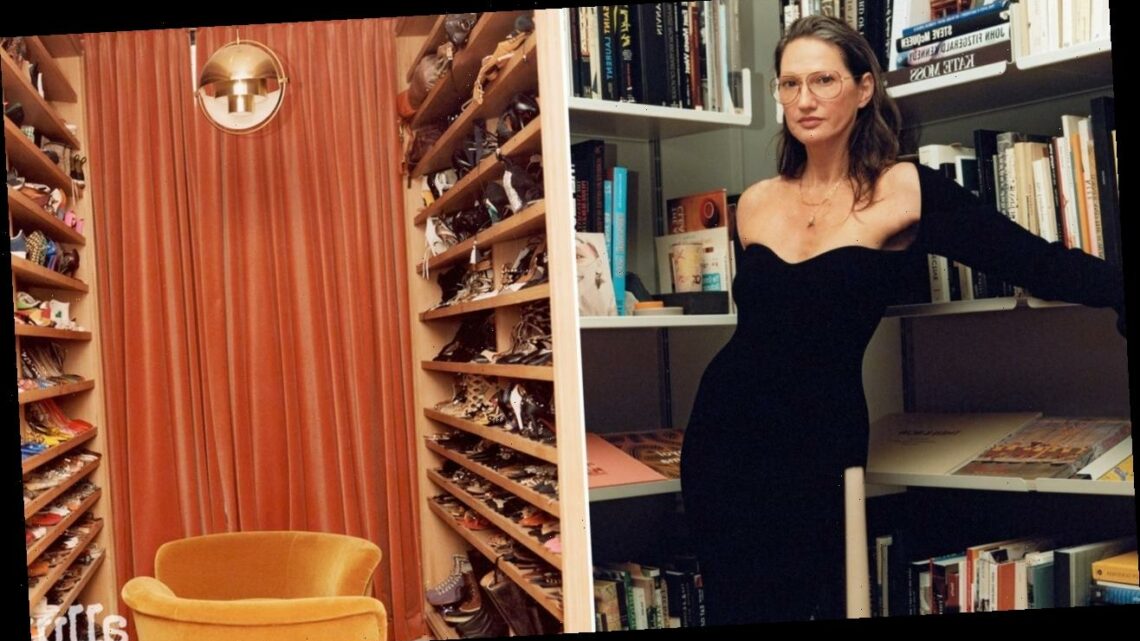 Several years after her conquest of American fashion as the creative director of J.Crew, Lyons is invading new territories: American homes and eyelids. The latter is through her collaboration with makeup artist Troi Ollivierre — LoveSeen false eyelashes — and the former through her HBO Max series, Stylish With Jenna Lyons. 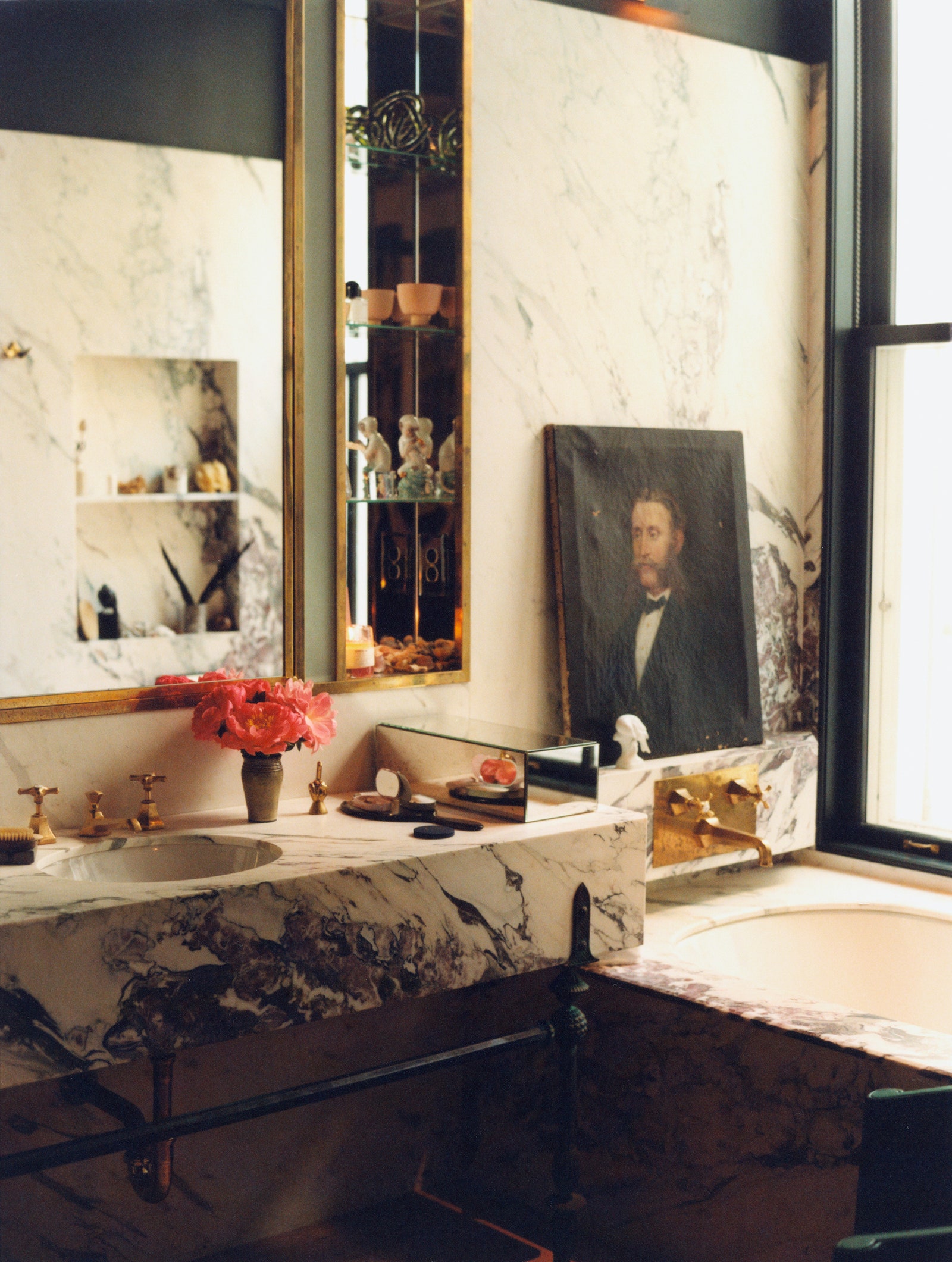 Her particular point of view, which helped define American fashion in the late aughts, translates flawlessly into the language of interiors. In the Lyons den, each piece of furniture gives off the sense that it was either plucked from a distant flea market or entirely custom made. Everything else is a work of art. In the living room, the impish pink of a modular sofa and the somber greens of monstera leaves appear to be engaged in battle, until you realize they're actually waltzing together, across an ancient rug, and in fact you love it — pink and green are your new favorite colors. Her bedroom is a temple to her philosophies of living color and offbeat merchandising, including a mythic shoe closet and a faraway toilet room, where a Japanese Toto toilet is guarded by walls plastered with mementos, handwritten notes, and Polaroid photos from a life lived in style. 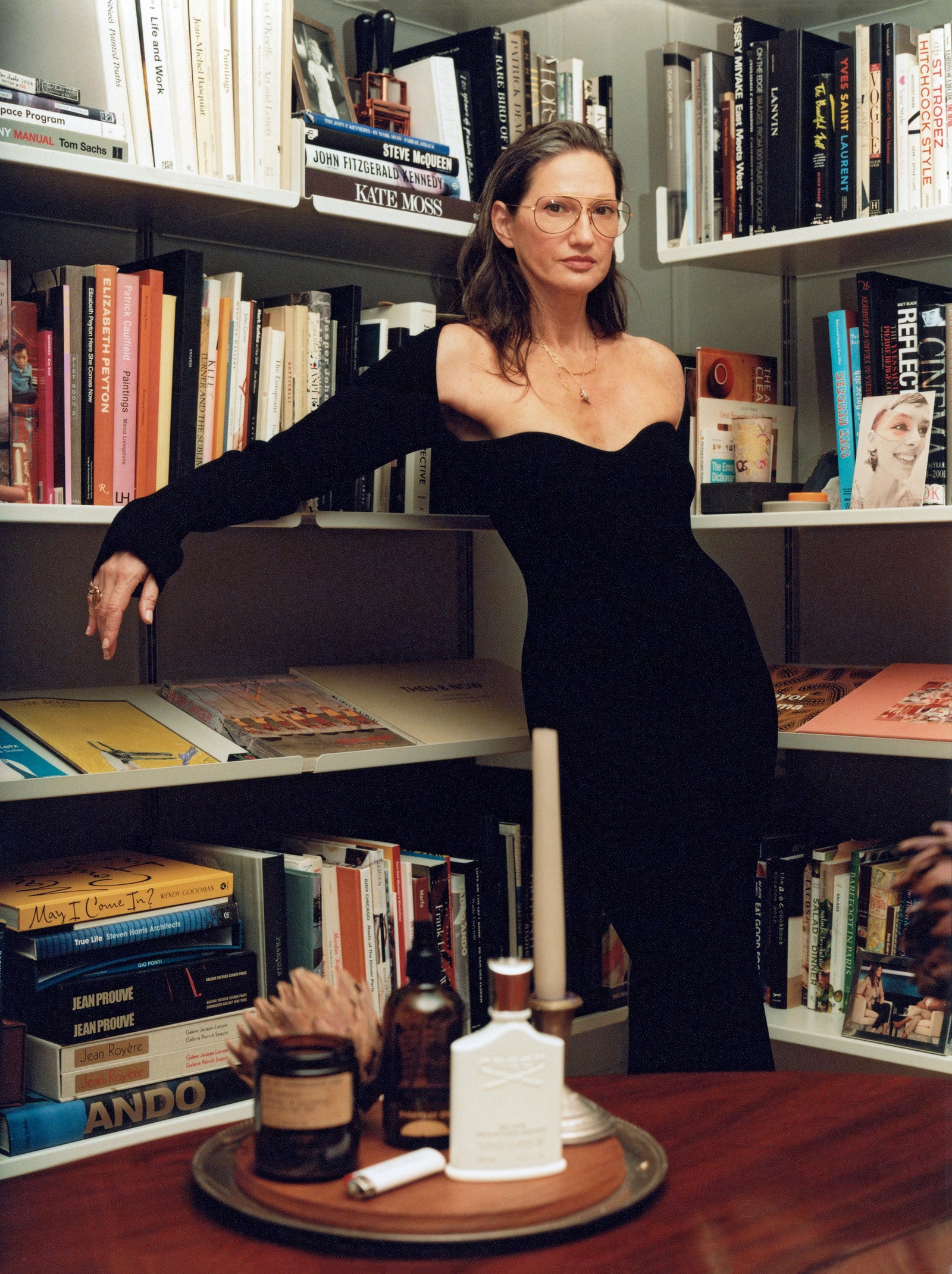 On her approach to beauty: "It's genuine, I guess. I've always been fascinated by the world of aesthetics and what people think of as beautiful and how that perception and perspective can really change. Growing up in California, there's a perspective on beauty. People are primarily blonde or they dye their hair blonde. There's a lot of plastic surgery, everyone's worked out, going to and from the gym. It's got a voice and a visual language to it. And I think one of the things that I liked about moving to New York is that I feel like there's so much range in terms of what's beautiful here. When I moved here, I had bleached blonde hair, I was really tan. I erased much of it."

On skin care: "One of my cabinets is primarily filled with lotions and potions and elixirs and all of the creamy, slathery stuff I love. I don't know what’s in the Biologique Recherche Creme Masque Vernix, but it might be the best thing that’s ever happened to me. I’m obsessed with this Skin Creamery [Oil-Milk Cleanser]. I have this GloPro microneedling device. It looks like I took a nail file to my face when I use it, but I love it." 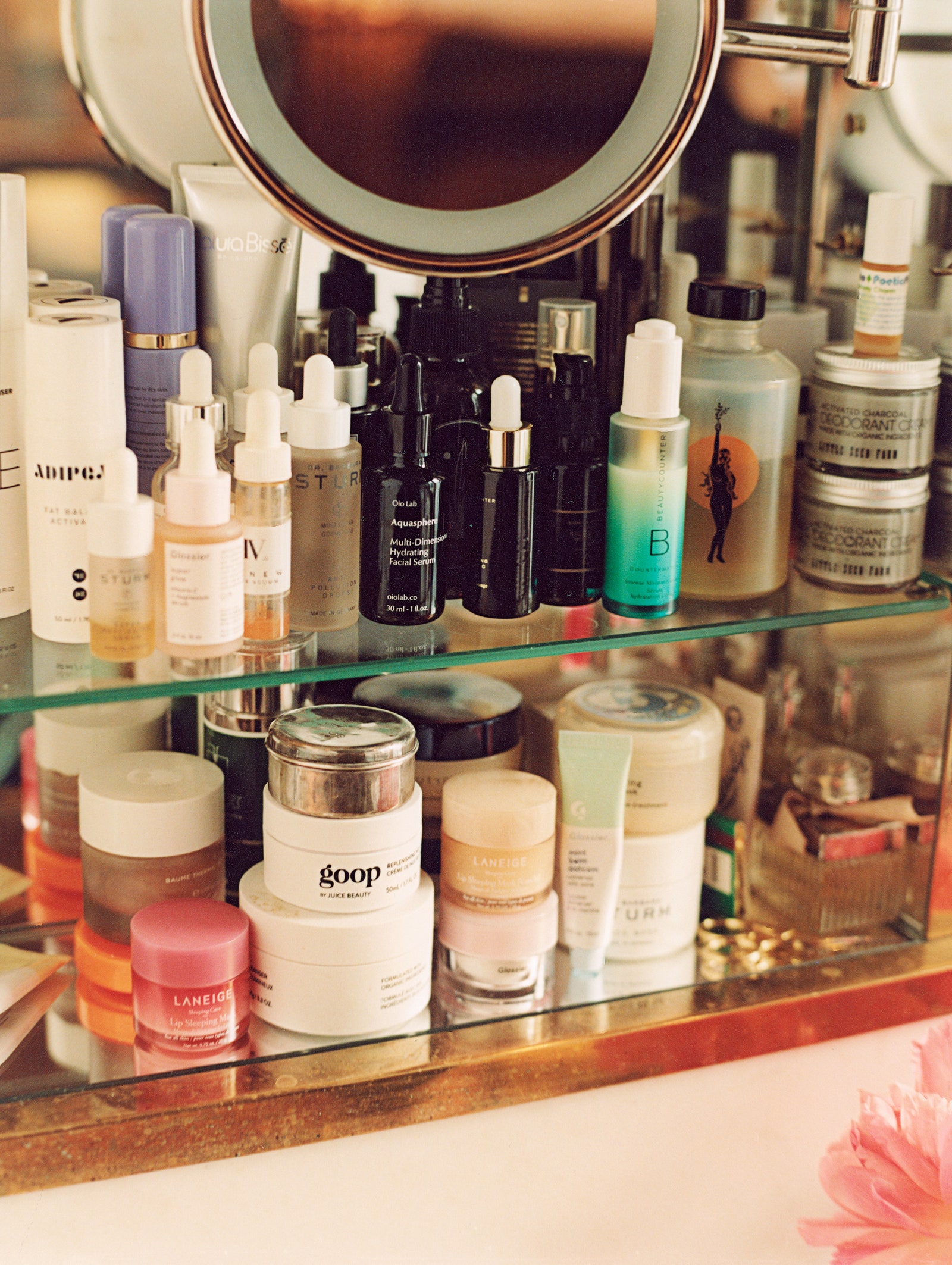 On inviting cameras into her home: "It's been interesting. It is far more invasive than I ever really understood and expected. I've learned a lot in this past year filming a show and understanding how intimate that experience is. Particularly when that in your home, in your bedroom, and there's just people in your space. It's really a strange feeling. I think if we did a season two, we would have to come up with a slightly different [plan] because, holy shit. Believe it or not, the most challenging thing [about filming at home] is people not recycling and throwing their food in my garbage. And I'm like, 'I have a garbage disposal, please don't do that.'”

On the photo of her Brooklyn bathroom that accidentally became the most "pinned" image in Pinterest's history: "In the early days, when people hadn't really sort of painted interiors dark, I painted the entire bedroom and bathroom with chalkboard paint, and yes, it got a lot of love. I wish I knew why because I think if I knew I would be able to replicate it. I really have no idea. All I can say is that… You know something is great when all of a sudden it's ugly. Particularly with fashion — you see something from your past and you go, 'Oh, it’s awful.' It's going to come back. It's just the law. I think it might just be that it felt really different than what was happening. It was very dramatic. And it still felt approachable, because the apartment was so traditional. But I really don't know." 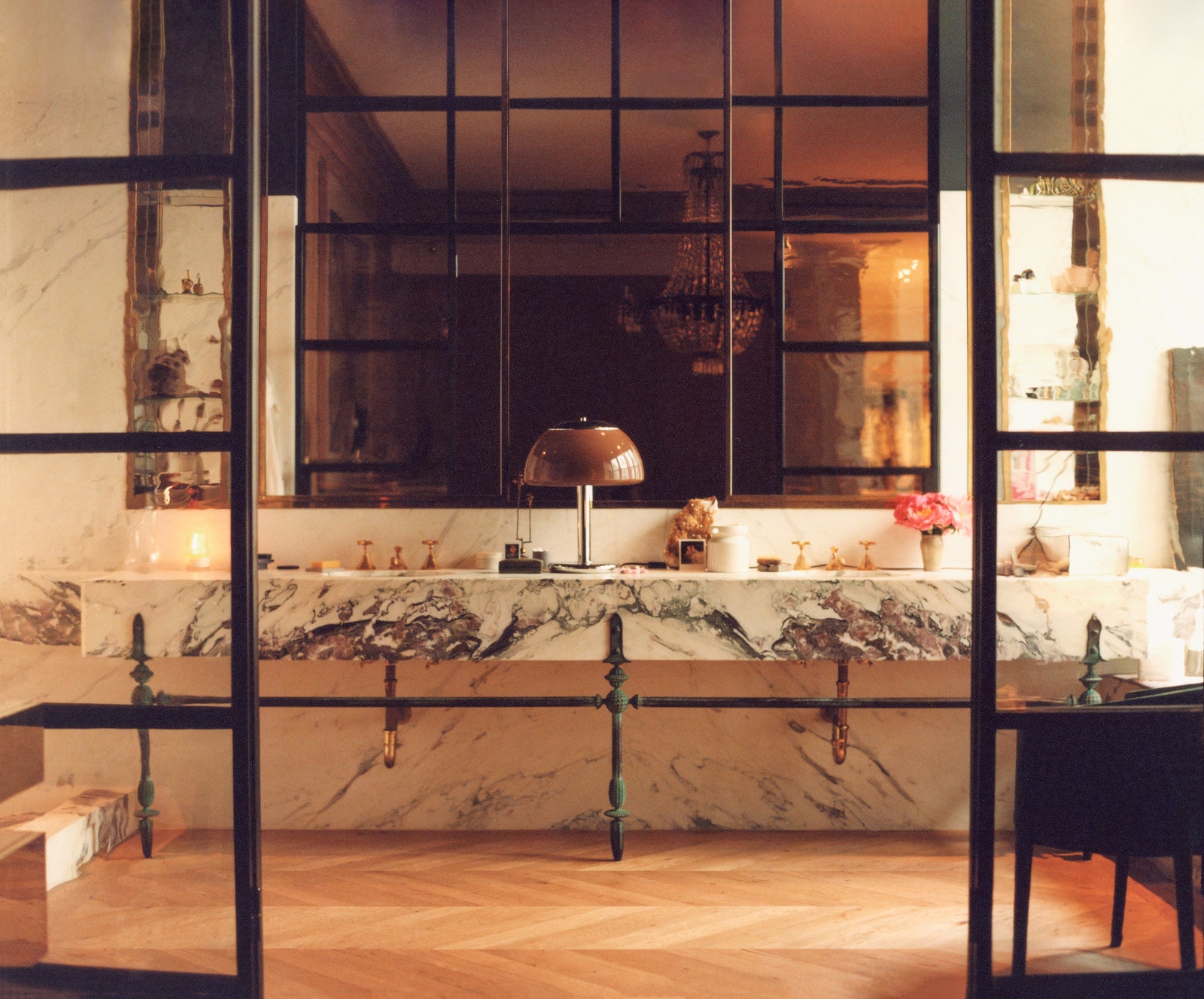 On bloody marble: "For the marble, I wanted something really dramatic. I was seeing a lot of Calacatta gold and Carrara marble, but I didn’t really want to have a white bathroom—everyone has a white bathroom. I said, 'I want it to look like a murder scene.' [Laughs] I went to every marble yard until I found the one in Brooklyn, 'cause I needed 18 slabs, which is ridiculous. I know it sounds crazy, but I wanted it to be almost ugly, not decadent. It sort of ended up looking a little decadent." 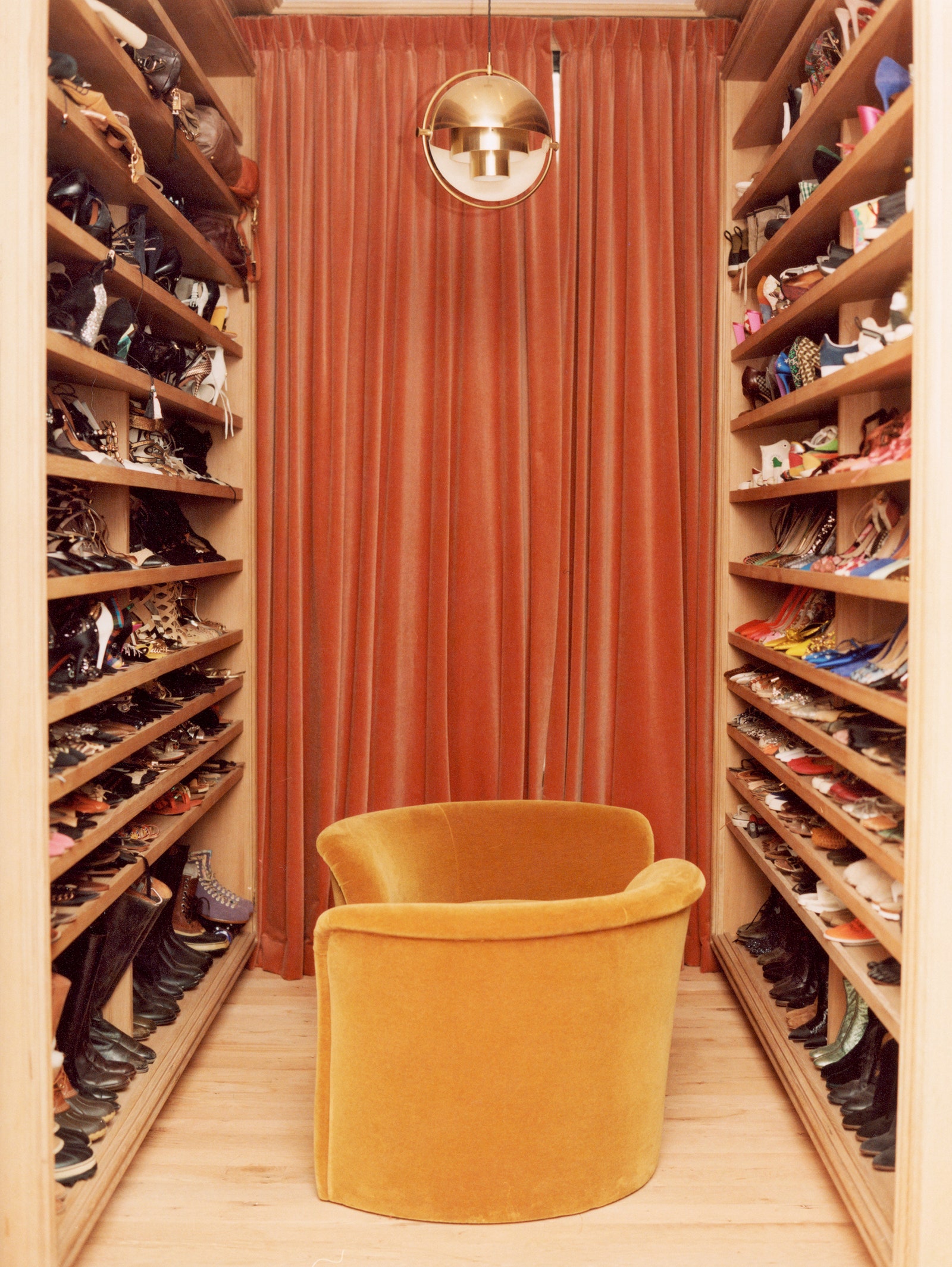 On the first step in renovating your home: "I did all the lighting first, and all of it is vintage. You have to really find shit first, because the architect has to know what it is, where it's going. You have to kind of do all that upfront. I have these two light fixtures [on either side of my bed] but they don't match. So that was, you know, we had to really think about how we're going to marry them. And then all of the switch plates, where they're going to go, You have to do all of your lighting plans first."

On installing a chandelier above her bed: "It's from my house in Brooklyn. I had two made — my ex-husband took one and I took the other one. I don't know if he's using his, though. It's a little over the top, but I don't care."

Watch the video below for a full tour of Lyons's well-lit bathroom and closet.

A version of this story originally appeared in the February 2021 issue of Allure. Learn how to subscribe here.

All products featured on Allure are independently selected by our editors. However, when you buy something through our retail links, we may earn an affiliate commission.

RHOC: Kelly Dodd Claims Braunwyn Windham-Burke Is 'a Fake Alcoholic' — 'Your Alcoholism Was All for a' Storyline
World News