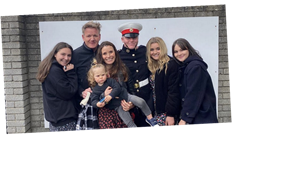 He’s no stranger to straight talking, but Gordon Ramsay has shocked fans with his frank parenting advice.

The father of five insists that he will never pay for his kids to fly anything more than economy and that they won’t inherit a penny of his fortune.

He also says their house has a strict swear ban and the children can forget working in one of his restaurants or even eating in one.

Get exclusive celebrity stories and fabulous photoshoots straight to your inbox with OK's daily newsletter . You can sign up at the top of the page.

The strict admissions surprised fans who assumed the life of a Ramsay offspring would come with a guaranteed silver spoon.

The 54-year-old and his wife Tana are parents to five children; 23-year-old Megan, 21-year-old twins Holly and Jack, 19-year-old Matilda, and one-year-old Oscar.

Speaking about his parenting decisions, Gordon’s thinking is that indulging them too much with his millions could spoil them.

Gordon told The Mirror: “I have got to keep it real with the kids, and also I think just getting kids at the age of five, six and seven, used to first class and those big seats, they do not need the space, they get entertainment on their iPads.

“So I like to think about what you can do with the money when you land, rather than paying out thousands of dollars for eight, nine ten-year-olds to sit in First Class.”

Picking up on the subject on another occasion, the chef said he wasn’t being "mean" and the decision has their best interests in mind.

Speaking to the Telegraph, he said: "It's definitely not going to them, and that's not in a mean way; it's to not spoil them."

He says that he won’t be buying his kids their first homes and will only put forward a quarter of the deposit.

"The only thing I've agreed with Tana is that they get a 25 per cent deposit on a flat, but not the whole flat," he said.

"I've never been really turned on about the money. That's not my number one objective and that's reflected in the way the kids are brought up."

The chef, who worked his way from the bottom using nothing but hard graft, has also previously said that he wouldn’t offer his kids jobs in any of his kitchens.

Speaking on US radio, Gordon said: "I’m firm, I’m fair and I will give you everything I’ve got to get you to the very top.

"And that’s it, no bulls**t. I take a lot of flak for being straight and honest, but I’m not worried about that f*****g snowflake generation."

He added: "It’s like not employing the kids. I don’t want the staff thinking: ‘F*** it’s Ramsay’s kid, we can’t tell them off. You want to work in this business? You f* off to another chef, learn something different and come back with something new to improve the business."

As for dining out at his fancy eateries? Well, the children can think again.

“They don’t go to my restaurants with their mates, it’s Wagamama or Nando’s,” the chef previously told The Sun.

"They keep asking me to get a f*****g black card. What is that?! [A VIP card giving celebs free meals.] If you met them, you’d be surprised at how down to earth they are.”

Strict dad Gordon has even gone as far to say that despite his own famous bad language, his kids are expected to toe the line with theirs.

He told The Mirror: "They know I’ve said bad words. I say it is an industry language. They don’t swear. They don’t walk around shouting the f-word."

Currently, his daughter Holly is carving a name for herself in the fashion industry while younger sister Tilly is an aspiring TV chef like her dad and already has published two cook books.

Meanwhile, his son Jack gained a degree from the University of Exeter and last year joined the Marines, while eldest Megan attended Oxford Brookes University.