Home » Lifestyle » “In the UK, the quiet unravelling of our reproductive rights is already well underway” 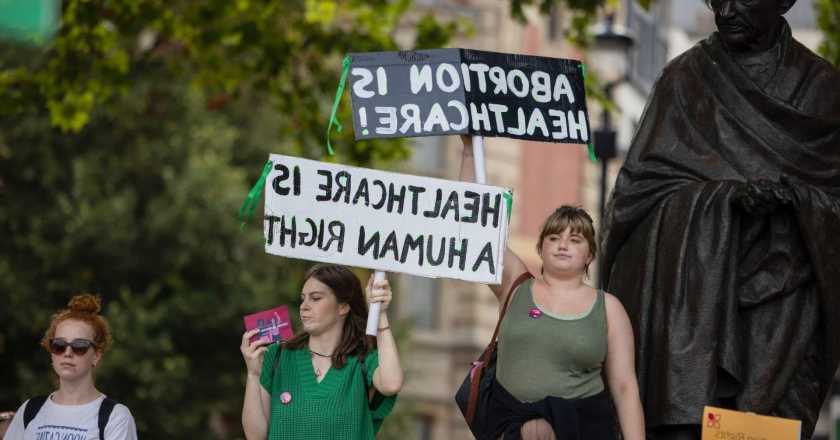 “In the UK, the quiet unravelling of our reproductive rights is already well underway”

In this exclusive op-ed for Stylist, Women’s Equality Party leader Mandu Reid reflects on the slow push back against reproductive rights in the UK after leaked government documents showed plans to tighten rules on ‘at-home abortions’.

Curtailing abortion rights is politically unpopular. We’ve seen that in the recent midterm election outcome in the US, where the so-called Roe Wave saw every single ballot on abortion go in favour of reproductive rights, even in majority-Republican states.

In the UK too, there is no political gain to be had from restricting reproductive rights, because the British public are overwhelmingly in favour of abortion access. Which is why the recently leaked government document outlining plans to curb access to at-home abortions shows how obsessed they are with curtailing women’s rights, even if it comes with substantial political risk.

The leaked document instructs abortion providers not to give pills to women seeking to take them at a location other than their registered address. This will negatively impact the most vulnerable women such as domestic abuse survivors and those with no fixed address.

Under this instruction women cannot exercise their reproductive rights in hotels, the homes of family members or friends, or refuges. There is no medical, logistical, or financial justification for narrowing the criteria women must meet in order to access telemedical abortions. The fact that this is one of the first actions of a government with a disturbing number of anti-choice ministers, paints a bleak picture of where we may be headed. After all, deeds speak louder than words.

A moment like this should trigger alarm bells, because it signals that the quiet, insidious unravelling of our rights is well underway. And worse still, the explanation offered by the government for this new instruction is to ensure full compliance with the 1967 Abortion Act, a clear cut example of why that law is an inadequate mechanism to ensure the delivery of women’s healthcare.

Abortion access is not a guarantee in any country of the UK. In England, Scotland and Wales, it is still embedded in criminal code; only accessible for women who fit specific criteria and can secure the permission of two doctors. And even where abortion is legal, it is still subject to ideological attacks and manipulation – something which we’ve seen happen to our sisters in Northern Ireland, where abortion was legalised in 2019 but remained inaccessible up until this year, due to the Northern Irish government’s refusal to commission abortion services.

One difference between myself and women needing abortions in this current political climate is that I sought one for myself around a decade ago, at a time when abortion providers and women’s healthcare had not yet been decimated by austerity and further damaged by the pandemic. It saddens and infuriates me when I hear stories of women unable to access healthcare clinics due to closures or distance, or unable to book the treatment they need because of the government’s sinister determination to quietly privatise chunks of our healthcare system.

The system works against you no matter what path you choose; yet another indication of how upholdingwomen’s rights is at the bottom of the government’s to-do list.

My abortion politicised me. It’s why I joined and now lead the Women’s Equality Party. Our mission is to push women’s equality right to the top of the political agenda. We successfully campaigned for better, more equal abortion access through at-home abortion provisions, and we will continue to campaign for the complete decriminalisation of abortion; for it to be properly funded and embedded into our healthcare system, where it belongs.

It took just five Supreme Court Justices to remove the right to an abortion in the USA, a grave injustice that could have been prevented had the Democrats recognised the threat to women’s reproductive rights posed by the Republicans and responded to their decades-long campaign. There was a rare, critical opportunity in the first two years of Obama’s rule – when Democrats had control of both the Senate and the House of Representatives – to advance women’s rights. This included codifying Roe vs Wade and expanding the national public health insurance to ensure abortions access for poorer women, all of which activists lobbyied the Obama administration for to no avail.

Women’s rights typically slip down the political agenda in bigger, mainstream parties, often dropping off the to-do list altogether. This attitude of “we’ll get to women’s rights once we’ve sorted everything else out” is exactly why the Women’s Equality Party was created. We are a direct response to the UK’s own political complacency over our rights, and, as the Conservative government continues to give way to right wing anti-choice ideology, our work is more important than ever.

As our rights continue to be attacked, I am looking ahead to the next general election and what is at stake. It is clear to me – and I hope – to the majority ofvoters – that the 12 damaging years of Conservative rule is at its conclusion. But, a Labour victory is only a victory for women if the protection and advancement of women’s rights is at the very core of the political vision they outline for our exhausted and fractured nation.

There can be no alternative, and my party and I will be there to ensure that vision is achieved.