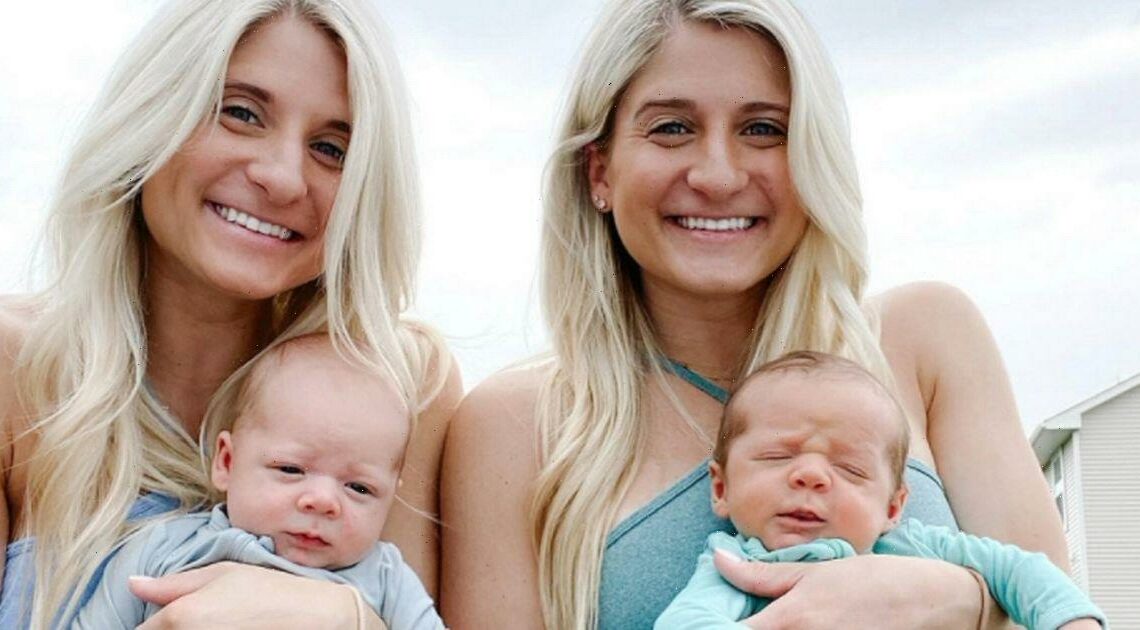 Identical twins experienced pregnancy together – then went into labour at the same time.

Even though they had different due dates, William “Trip” Saunders Soule was delivered on July 8 at 11.27pm, while Crew Philip Crawford followed on July 9 at 1:28am.

The tots are now happy and healthy six-month-olds and already get on well just like their mothers.

Rachel and Kim speak about their unique bond on TikTok, where they have more than 282,000 followers.

They told fans: “We knew we wanted kids at the same time and ended pregnant the same month.”

Then when the pair went into labour at similar times, they grabbed their bags and headed to the hospital together.

They even planned to pass time on the ward by playing games together!

In a TikTok video, they recalled: “When you brought cards to the hospital, thinking you would have downtime during labour.

The sisters also clear up common misconceptions on their TikTok page.

In a video that’s been viewed 107,000 times, they revealed they had separate weddings.

And contrary to popular belief, the siblings didn’t get married to twins themselves.

Their babies look very similar though – and the mums look for tell-tale characters to tell them apart.

Trip was born with slightly darker hair and is smaller than Crew as he was delivered a couple of weeks before his due date.

Rachel and Kim aren't the only twins to fall pregnant at the same time.

Brittany and Briana Deane, 34, met their husbands Josh and Jeremy Salyers back in 2017 while attending a festival dedicated for twins.

Their fairytale continued as each couple got engaged just six months after meeting before tying the knot in a joint ceremony in 2018.

Then things got even better when the identical twins got pregnant at the same time back in August 2020.

Both sets of twins live in the same house in Virginia, US, while raising their new baby boys.

Briana and Jeremy had a son called Jax, while Brittany and Josh welcomed a boy who they named Jett.

For more lifestyle stories delivered straight to your inbox, sign up to the free Hot Topics newsletter here.