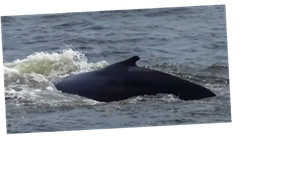 Humpback whales have made a comeback in New York City

A whale sighting in New York would have been almost unimaginable a few years ago. Now, the city is welcoming back whales.

The Hudson River, which flows along the western stretch of Manhattan, is a lot cleaner than it was in the past, “and so it’s bringing nutrients out rather than pollution,” said Paul Sieswerda, president of the group Gotham Whale, which advocates for whales and marine mammals in New York City.

The Clean Water Act and the Mammal Protection Act, enacted in 1972, likely helped revive plankton levels in the area. Over the years, the food chain has been built up, and humpback whales are now enjoying some New York fine dining.

“The whales come here to eat. New York is famous as being a good place to find good food. And the whales have found menhaden, which the local fishermen call ‘bunker,'” Sieswerda said.

Of course, life in the Big Apple isn’t always smooth sailing. It is home to the busiest seaport in the Atlantic. The biggest danger to whales is ships.

“And so the whales are actually playing in traffic. The channels and roadways, so to speak, of the big vessels coming into the harbor are the same place where the whales are feeding,” said Sieswerda.

Celebrity Couples Who Got Married in Secret
World News