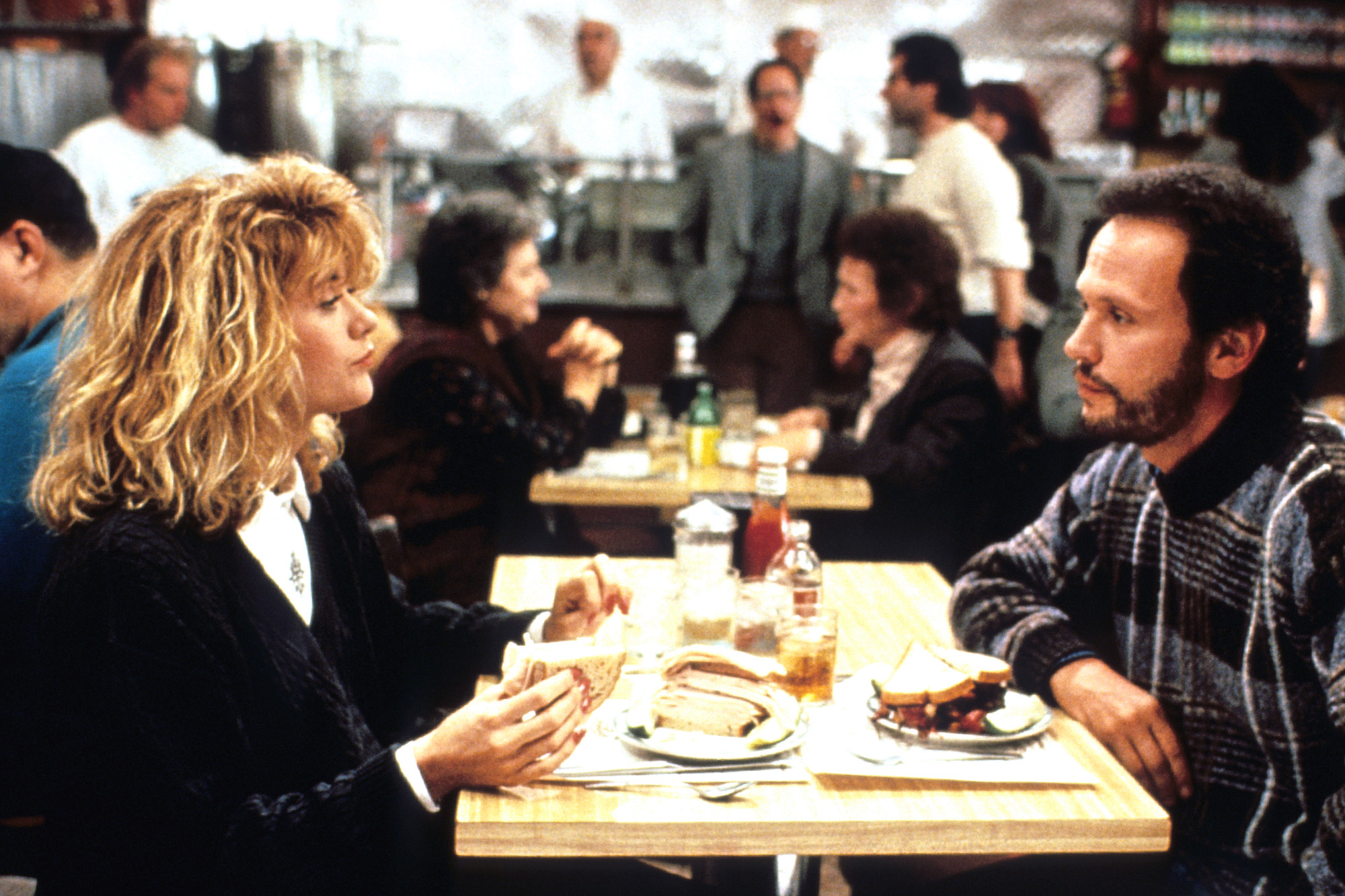 How rom-coms ruined love and sex for all of us

Growing up, Blythe Roberson studiously watched and learned from iconic romantic comedies — the kinds where destined protagonists joyfully fall for each other, despite all odds.

“I was raised by a mom who owned, like, four total VHS tapes, three of which were ‘When Harry Met Sally,’ ‘Sense and Sensibility’ and ‘You’ve Got Mail,’ ” she writes in her new book “How To Date Men When You Hate Men” (Flatiron Books). “It’s not exaggerating to say I have seen those movies a combined total of 100 times . . . [They’re] part of who I am.”

But when the comedian entered the dating world, she realized her beloved rom-coms had “kind of warped my view of love,” the 28-year-old tells The Post.

Take two of her favorite Nora Ephron cheese-fests: “When Harry Met Sally” and “You’ve Got Mail.” In both, Roberson points out, a character played by Meg Ryan waits around for a man “who doesn’t deserve her” to sweep her off her feet — and when he does, it’s usually through flirting that’s straight-up mean.

“When I watch those movies today, I’m like, ‘Nora, who hurt you?’ ” says Roberson, who lives in Greenpoint and works as a researcher for “The Late Show With Stephen Colbert.”

In her book, Roberson offers a guide to dating, hooking up and straight-up shameless flirting in 2019. Woven throughout are ways to rethink the lessons learned from romantic comedies, such as putting up with jerks like Harry in the iconic 1989 film.

“Sometimes men are intending to be flirty when they’re mean, but it’s not cool and we need to stop conditioning them to do it,” says Roberson. Instead, she says, she thinks women should work to reprogram dudes with more desirable behaviors — “like asking me about One Direction or complimenting my hair.”

Here, Roberson shares the worst ways rom-coms shaped her love life — and what singles can learn from her decidedly uncinematic dating disasters.

Plot: A perpetually obnoxious Harry (Billy Crystal) “keeps appearing in Sally’s [Meg Ryan] life and then eventually [after many years] they fall in love,” Roberson says.

The love lesson: Just wait around for love to find its way to you: “If your love interest is incompatible with you, that’s just the start of your love journey,” she says.

In reality: This kind of “will they, won’t they” waiting around ramps up plot drama. But off-screen, it leads to a lot of unnecessary emotional roller-coastering.

The dating flop: Once, Roberson was figuring out how to divulge her interest in a longtime crush. After six months of agonizing, she made plans to profess her love to him in Central Park — a sweeping gesture in a Hollywood-worthy locale. “But then Obama was in town and I got blocked by the motorcade and the guy just left,” she says. “I never told him and he started dating someone else.”

The real takeaway: Don’t spend months pining away for romance’s sake. If you like someone, ask them out — in a timely fashion.

The love lesson: “Two hot people . . . being mean to one another is supposedly ‘flirting,’ ” Roberson writes.

The dating flop: “When I was a teen, I told a white guy who had gotten cornrows, flirtily, ‘Your hair looks awful.’ He was like, ‘Blythe, that’s a really mean thing to say about someone,’ and my stomach dropped,” Roberson says. Things didn’t work out.

The real takeaway: Follow the golden rule. “You don’t have to be rude to have a connection with someone.”

Plot: In Jane Austen’s OG rom-com, Mr. Bennet has five daughters and a wife — “and if he ever dies, they’re f–ked forever because they won’t inherit property,” Roberson says. “So they all need to find husbands.”

The love lesson: You get married to someone or … you die, poor.

In reality: Marriage is one possible result of dating, but it isn’t the be-all end-all. Roberson — who has “never been close” to getting married — loves the spark of something new. “I guess I’m just addicted to the thought of always being validated by a new person!”

The dating flop: Roberson knew she was too invested in Austen’s marriage plot when she asked a longtime crush why he’d never made a move. His response? She gave off “such strong relationship vibes.”

The real takeaway: This isn’t Victorian England, where a woman’s debutante phase was “essentially the one exciting year of [her] life,” Roberson writes. Dating itself is exciting and satisfying. Now, Roberson says, “[I] give off only ‘I am very chill and want to hook up casually until we’re skeletons’ vibes.”

Plot: “It’s about a single woman living in London who is constantly trying to lose 12 pounds and her exploits in dating,” Roberson says. Jones agonizes over whether to wear comfortable but conventionally unsexy high-waisted underwear.

The love lesson: You have to look hot to find love.

In reality: Women tend to internalize the idea that they have to look “a certain amount of sexy” to attract a partner. But there is, at least in Roberson’s experience, “no correlation” between “how hot I look and people wanting to make out with me.” Frankly, she’s as likely to get action in her typical uniform — sweats and a flannel shirt — as she is in a sexy get-up.

The dating flop: After getting her hair blown out recently, Roberson made plans to see a crush. “I was like, ‘I’m gonna look hot as hell and need to have a date.’ ” She even texted a picture of her glamorous hair to said date — after which he promptly stopped talking to her, and the date never panned out. “He ghosted my beautiful gorgeous blowout!”

The real takeaway: Someone’s into you or they’re not. A tiny thong won’t change that.

Plot: Magazine writer Andie (Kate Hudson) “does stunts” to make her columns more interesting, including trying to be annoying enough to lose a guy, Ben (Matthew McConaughey), Roberson says. The stunts backfire and the two still end up together.

The love lesson: “Don’t turn your love life into content,” as Roberson puts it in her book.

In reality: Clearly, the comedian has come around on sharing details about her dating life — as long as it’s for a good reason, which she considers her book to be.

The dating flop: Roberson says she once hooked up with someone where the situation felt more like a “romantic friendship.” Without mentioning the guy by name, she made a joke about romantic friendships on her Twitter — “something about Watson and Holmes.” He was pissed off when he saw it, and “the tweet ended up in a fight.”

The real takeaway: These days, Roberson sticks to sharing experiences for the greater good — such as helping others navigate the dating world — and not for stunts or the sheer pleasure of a subtweet. Plus, she gives people fair warning: “I just tell my crushes not to read my work!”