Home » Lifestyle » How old is new Strictly Come Dancing pro Cameron Lombard and is he single? 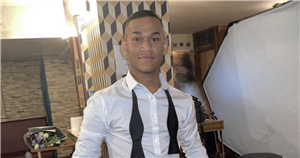 How old is new Strictly Come Dancing pro Cameron Lombard and is he single?

The newest season of Strictly is here, and its 15 new celebrity contestants and their pairings have been revealed.

We can't wait to see everyone take to the ballroom floor and this year we have multiple new professionals joining the cast.

Strictly Come Dancing bid goodbye to four of their former pros, with AJ Pritchard and Kevin Clifton both pursuing other opportunities.

However, Janette Manrara and Anton DuBeke are both staying in the BBC family, as Janette will now be hosting the show's spin-off, It Takes Two, and long-time judge Bruno Tonioli has been replaced by Anton.

One of this season's newest additions is Cameron Lombard, who' hasn't been allocated a partner for his first season on the show.

Strictly fans took to Twitter during the show's launch evening and gushed over how "gorgeous" and "sexy" the dancer was, but were furious he was "benched".

Who is Cameron Lombard and how old is he?

Cameron Lombard is Strictly Come Dancing's youngest ever professional dancer and is only 20 years old.

He is also the reigning South African Latin Champion.

Cameron started dancing at a mere six years old, and within a year was already winning local and regional competitions.

He was a finalist on South Africa’s Got Talent in 2012, and he represented his country at the World Championships in 2019.

He's had a bit of a social media cleanse, and only has 18 posts on his profile, but the star frequently posts on his stories.

With only 8K followers as the show's launch was aired, we can imagine his following is set to skyrocket over the coming months.

Is Cameron Lombard in a relationship or is he single?

Due to his social media cleanse, it's hard to tell whether or not Cameron is in a relationship.

He seems keep his private life out of the public eye, but his love life and any potential romances will undoubtedly be put under the spotlight during his time on Strictly.

What has Cameron said about joining the Strictly cast?

Writing on his Instagram account, Cameron announced his new position on the Strictly team back in July.

"Not only is this a dream come true but a challenge I am accepting with both hands. It is an honour to be representing Cape Town, South Africa and to join the world’s most amazing dancers on this stage."

For more juicy gossip on your favourite stars, sign up to our daily newsletter here