Home » Lifestyle » How Heidi Klum Became the Queen of Halloween 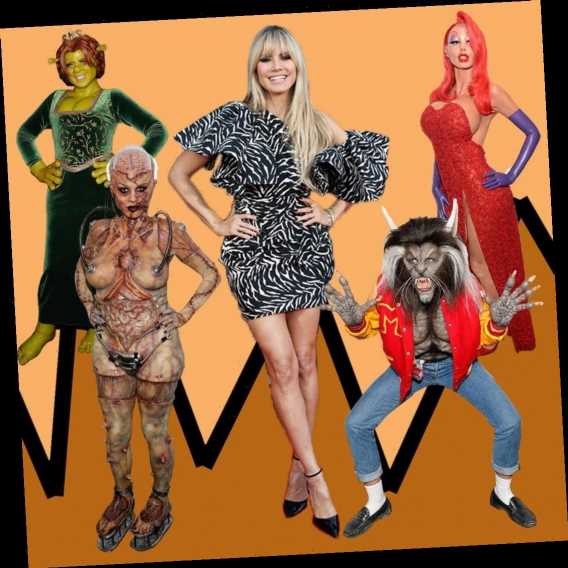 How Heidi Klum Became the Queen of Halloween

For 20 years straight, Heidi Klum's Halloween party was the place to be on Oct. 31. Scroll on to see every incredible costume she's ever worn.

"When I moved to America, I immediately fell in love with Halloween and the spookiness of it. All that was missing was a fantastic party. It felt like a real opportunity for me."

Heidi Klum wasn't lying when she described her feelings towards the scariest day of the year during a 2018 interview with The Hollywood Reporter. For the last two decades, the model has capitalized on that opportunity in a big way by hosting an annual gathering for Hollywood's elite ghouls and gals. And thanks to her jaw-dropping costumes, each one more intricate than the last, she's secured herself the undisputed title of Queen of Halloween.

"By me doing crazy, elaborate outfits as the host, my hope had always been that all my guests would follow. And it's worked because, over the years, people have become increasingly more outrageous with their costumes," the America's Got Talent judge explained. "The party has become almost legendary. It's epic. I feel like my love for Halloween has made other people fall in love with the holiday, too."

In any other year, Klum would likely be putting the finishing touches on this holiday's big reveal right about now—an idea she'd no doubt have been working on since the minute her party ended back in the wee hours of Nov. 1. And yet, thanks to the coronavirus pandemic, this is no ordinary year. Like the rest of 2020, Klum's Halloween is going to look a little bit different.

"For the first year in a long time I am not hosting my annual party," she told THR in late October, "but that does not mean that we can't be creative and celebrate." To that end, she shared that her plans for All Hallows' Eve will involve a marathon of classic horror films, festive family projects and, of course, a costume reveal on social media.

"What is most important is to spend time with family and do fun projects together," Klum said. "As my good friend and makeup artist Bill Corso said, 'A little powder and a little paint makes you what you ain't,' so let's all powder, paint, stay safe and escape."

While we wait to see what Klum has safely up her sleeve this year, take a look back at every costume she's rocked since hosting her first party all the way back in 2000!

This Bachelorette Sneak Peek Might Be the Most Dramatic Yet

Heidi Klum's costume was truly out of this world as a gory alien.

While attending Paris Hilton's festivities the week before Halloween, it seemed the model took inspiration from the "fireworks" that new hubby Tom Kaulitz makes her feel.

The America's Got Talent judge had a hair-raising good time dressed up as the werewolf from Michael Jackson's "Thriller" music video.

Instead of transforming into someone else, Klum opted to clone herself five times with the help of prosthetics and some fabulous wigs.

Heidi who? This year, the former Project Runway host answered only to Jessica Rabbit.

"They said, 'Are you really in there Mama?'" Klum told E! News, talking about her children's reaction to her metamorphosis into a butterfly.

As for her kids' reactions to this elderly get-up, Klum told E! News, "The one time that I [looked] like me but older, they were scared."

Heidi gave Elizabeth Taylor a run for her money in this chic Cleopatra costume.

Klum's seen here with ex-husband Seal at a time when they were presumably quite a bit more bananas about one another.

The former Victoria's Secret Angel looked like she hopped right out of an anatomy text book. Fun fact: This year, Klum held two parties. This costume debuted on Oct. 29 in Las Vegas.

Klum is tall, but not that tall. She's actually wearing stilts to make this robot monstrosity more menacing.

Little known fact about crows: a group of them is called a murder. Perhaps that's why the model chose the bird for her haunting costume.

No, this isn't the Genie from Aladdin. It's actually the Hindu goddess of death and time, Kali.

Klum's ferocious feline doesn't hold a creepy candle to the CGI in Cats.

She's the apple of our eye in this costume inspired by the biblical tale of Eve and the forbidden fruit.

Eat your heart out. Literally!

Not all witches wear black, you know? In fact, this witch had a lacy costume that included a fake skeleton.

Gladiator goddess or sci-fi dream? Either way, this vivacious look goes down as one of her best.

For dressing as a cartoon figure, Klum makes a striking match for Betty Boop.

In her second year hosting, Klum went full Lady Godiva—horse and all!