Home » Horror crash survivors engaged days after accident: ‘Our love is stronger than ever’ 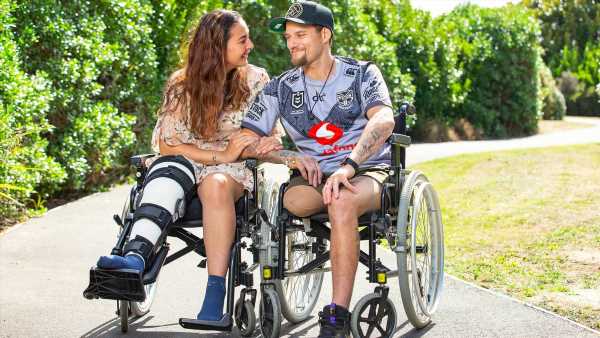 Horror crash survivors engaged days after accident: ‘Our love is stronger than ever’

As Kendra Smith lay in the middle ofa motorway, with a critical leg injury and pieces of broken motorcycle scattered around her, the Kāpiti Coast mum screamed out to first responders on the crash scene. “I’m pregnant!” she cried, clutching her rounded belly.

Two metres away, her partner Corey Thompson was slowly dragging himself towards her using only his left arm, tucking his other badly broken one into his side. After their bike had collided with a truck, the dad-of-three already knew he’d lost a leg in the accident. “Kendra, my darling,” he said. “I’m sorry.”

It was on a sunny summer holiday afternoon on January 12 that the Harley Davidson crashed in Ohau, just south of Levin, almost ending their lives. Now, the couple is wheelchair-bound as Kendra faces months of recovery to walk again and Corey adapts to life with one leg.

But the pair are grieving more than the loss of their mobility. Although their precious unborn son miraculously survived the horror accident three months ago, he tragically passed away in Wellington Hospital a few days later, when Kendra underwent leg-saving surgery.

Together, the couple is getting through the hardest months of their lives with strength from one another, even sealing their love with an emotional hospital-bed engagement.

“When we were reunited two days after the accident, the nurses put our beds together so we could reach out and hold hands,” tells Kendra, 26, a mum to son Caasi, five, from a previous relationship. “One of the first things Corey said was, ‘I can’t get on one knee right now, but will you marry me?’

“In the past, marriage wasn’t something I ever wanted, unless a person could make a vow to really be there for me. But during the whole accident, Corey managed to prove his love beyond what I expected. I said yes straight away.”

As Kendra thinks back to the day of the crash – when they went to help Corey’s brother, who had run out of petrol – she compares it to a horrible nightmare. For her fiancé, a painter she met through friends, much of the life-changing accident is a blur.

“I looked around and it was like I was in a dream,” tells Corey, 32, dad to daughters Laylah, 7, Harmony, 5, and Dizzelle, 4. “I tried to lift my leg up and it was just bone. I knew straight away it was gone and my arm was close, because the handlebar had hit my shoulder and snapped the bone down to my elbow. It was just hanging there.”

Corey, who now has minimal use of his dominant right hand, recalls taking off his helmet and unzipping his jacket to take out an empty petrol can, then feeling first responders strap his destroyed leg with a tiedown for trailers. “They poured water over me to cool me down and that’s all I remember before waking two days later.”

Kendra, who was 14 weeks pregnant at the time, thought she’d also lost her right leg. “I was wearing knee-high leather boots and when we were sliding, the pressure ripped the zip off and damage was done from my knee to the middle of my shin,” she says. “I could hardly feel the pain because of the adrenaline and I just remember telling Corey, ‘It’s okay. It’s not your fault.'”

But the panic quickly set in as Kendra realised she couldn’t pick Caasi up from daycare.
“I asked a man beside me to borrow his phone and I rang my mum,” she remembers. “I can’t thank the first responders enough for what they did. I was able to tell her we’d been in an accident, that Corey was really bad and we were going to hospital. But I was talking so normally, she had no idea I was badly injured too.”

Rescue helicopters turned up to take the couple away separately, but Corey initially resisted paramedics’ attempts to airlift him. “He was fighting them off, saying, ‘No, take Kendra first,’ and making such a hissy fit, he ended up dying,” she says. “They managed to get him responsive again and into the helicopter. When it was my turn, I remember looking up from the stretcher and asking if my baby was okay.”

Two days after arriving at Wellington Hospital, Corey woke to the sound of his dad’s voice. In a bizarre twist of fate, his father also lost his right leg in a motorbike accident a few years before Corey was born.

“When my dad woke up from his coma years ago, he freaked out and grabbed the hoses out of his mouth, so he held my hand so I wouldn’t do that,” says Corey. “But I didn’t try to pull them because I already knew my leg was gone. I looked and saw my arm was still there, which I was really happy about.”

When the nurses took the tubes away from Corey’s face, the first word he uttered was his girlfriend’s name.

A few months before the accident, during a conversation with family, Corey mentioned proposing to Kendra on their one-year anniversary in February. “I already knew I wanted to be with her for the rest of my life because she’s strong, independent, loving, caring and a really good mother,” says Corey.

“She brings out the best in me and wants only good for us. A year was enough time to know it was right. After the accident, I realised I could’ve died and not had the chance to do it.”

The couple had been excited to learn they were expecting a child together. In hospital, on the advice of Corey’s supportive sister Natalya Berkland, 28, they named their precious unborn son Taonga as his survival was a gift that had given them hope after the crash.

“But when I was in recovery after a long surgery, they told me his heart had stopped beating – my heart just dropped and I wailed,” shares Kendra, who later bravely gave birth to Taonga while Corey held her hand. “We talked and cried together. The hardest part was birthing a baby who was never going to wrap his fingers around my thumb.”

Once the couple have recovered from the crash, a special ceremony will be held for their son, who stayed between them for a day and night in hospital, with his little head rested on a teddy gifted by the hospital.

“I carried the teddy everywhere after Baby left, even into surgery,” Kendra confides. “Now it sits on drawers beside our bed, wearing a feather korowai my sister made.”

For the devoted mum, her main priority is making sure Caasi has as normal a life as possible while she’s restricted to a wheelchair. “He’s the reason I battle every demon and sleepless night,” Kendra tells. “He has been so great since we came home from hospital and is excited to help out. He’s back to his cuddly, cheeky self. But it was absolute agony being away from him while I was in hospital.”

As the couple chat, Caasi runs over with a grin, softly running his finger over the scars on his stepdad’s arm. “He has been really gentle when he comes in for a hug,” says Corey, who still manages to vacuum the house by attaching it to the back of his wheelchair and using his good arm. “I was pretty active before the crash, but now I have to hop around with Caasi or take him for a spin on the wheelchair.”

Although the couple was able to leave hospital just a month after their accident, surprising staff with their fast recovery, it’ll be almost a year before Kendra is back walking. Permanent rods in her leg mean no sports for the former netballer and touch player, who had to leave her retail job of three years after the accident.

But the kindness and support of loved ones and the Ka¯piti community has been uplifting, with a Givealittle page set up to help ease the stress of ongoing health and living costs.

“While we were in hospital, we were offered a rental property with wheelchair access, which happens to be right beside my parents’ house!” Kendra laughs. “Someone’s looking over us because, funnily enough, most of the first responders at the crash were nurses and volunteer firefighters. We probably wouldn’t have made it otherwise, since they stopped both of our legs bleeding out.”

To enable Caasi to live at home with Kendra and Corey as they recover, her younger brother D’Angelo Smith, 18, has stepped in as his nephew’s caregiver. “I’m so grateful for him to drop his life to help us, like so many of our family,” tells Kendra. “But I can’t wait to be back in the picture as Mum, taking Caasi to school.”

Showing off an engagement ring Corey picked out earlier this month, she continues, “I can’t wait to get married and be out of this wheel-chair. God gave us a second chance, so we’ll make the most of it.”