The number of foreign workers in Australia would need to be boosted significantly to meet Prime Minister Scott Morrison’s promise of creating 1.3 million new jobs in five years, a pledge a major employer group has described as “hollow”.

Industry groups are calling for permanent skilled migration levels to be raised and economists say the problem is not creating jobs – with vacancies at record highs and the unemployment rate tipped to fall below 4 per cent this year – but finding qualified people to fill them. 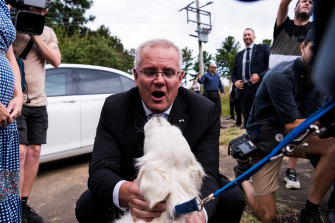 Morrison unveiled the jobs promise on Tuesday, highlighting previous announcements on funding for training positions and apprentice incentives as part of the plan to increase the country’s workforce.

“There’s limited substance behind it, to be honest. I just think it doesn’t have the detail; it does ring a bit hollow,” said McKellar, who, along with the Business Council of Australia, wants to dramatically raise the ceiling for migration in the next financial year.

“To get the economy operating at its full capacity, it is imperative that we increase our permanent skilled migration intake up to 200,000 for at least the next two years,” he said.

At a factory in Sydney’s west, the prime minister said a Coalition government would not lift the permanent migration cap to boost the numbers of workers in jobs. Australia takes in 160,000 new permanent migrants each year, of which 109,900 are in the skilled migration stream.

“Our migration program that is set out in the budget, the cap is there at 160,000. There’s no change to that, and we are increasing the proportion of skills components within that,” Morrison said.

Opposition Leader Anthony Albanese said the Coalition had a press release on a jobs target but no plan to actually deliver it. “This is another promise, not a plan,” he said.

Economist Callam Pickering said the only way to add so many jobs over five years would be to boost skilled migration.

“That calls into question this idea that over the next five years, we could create 1.3 million jobs.”

Morrison’s pledge was an echo of his January 2019 promise to create 1.25 million jobs over five years. So far, that promise is behind schedule as 505,000 new jobs have been created in roughly three years since the May 2019 election.

The healthcare and social services sectors, which now employ more than 2 million people, added two-thirds of those jobs.

Australian Medical Association president Dr Omar Khorshid said there were unfilled jobs across aged care, general practices, rural health centres and major hospitals, but healthcare was not the only sector desperate for workers.

“If that [migrant worker] cap is inadequate, there’ll be a lot of competition for access to it,” he said.

Khorshid said healthcare needed long-term solutions to the worker shortages, and migration couldn’t be the only answer.

“But in the short term, it’s the only way to quickly get more people,” he said.

The aged care sector has also renewed calls for migration levels to be lifted. Pat Garcia, chief executive of provider body Catholic Health Australia, said part of the short-term solution was lowering entry requirements for overseas nurses and carers while not sapping skills from developing nations.

EY chief economist Cherelle Murphy said the number of jobs was not a problem, with an unemployment rate of 4 per cent and tracking down, workforce participation above 61 per cent and job vacancies reaching a record high of 423,500 in February.

Pickering said the economy was creating a huge number of jobs.

“We’re increasingly seeing that a lot of businesses are finding it difficult to fill roles and jobs are staying vacant for longer than they did in the past. And that’s only going to get worse as the unemployment rate declines,” he said.

McKellar also agreed with concerns from the Master Builders’ Association and the Australian Industry Group regarding the government’s major decrease in subsidies for apprenticeships, which will be 10 per cent, down from 50 per cent, of wages from July.

“It’s a significant watering down of the incentives … we will continue to struggle with a shortage of skilled workers. This is a critical part of the solution in investing in skills and training for young Australians,” he said, adding Labor’s plan for apprentices to receive $10,000 in “new energy” industries was, in policy, “little more than a vacuum, at the moment”.

Melbourne mechanic Michael Bradbury, who owns Stop & Go Brake and Service Centre in Seaford, said government subsidies were critical, and the reduction made him question whether hiring an apprentice was financially worth it.

”A first-year apprentice basically costs you money before they’re competent enough to be generating profit in the business … that subsidy helps covers those costs,” Bradbury said.

A Labor spokesperson said the party’s new energy apprenticeships “build on rather than reduce existing apprenticeship subsidies to employers, unlike the government’s budget measures.”