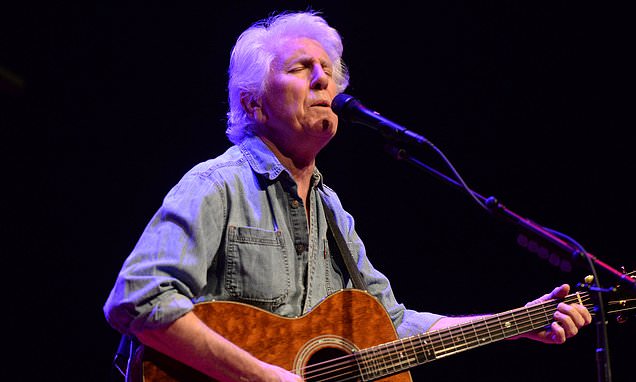 Hippy rocker Graham Nash marries a lover half his age

SEBASTIAN SHAKESPEARE: Hippy rocker Graham Nash marries a lover half his age after the 77-year-old boasted of their ‘insane’ sex life

Rock star Graham Nash boasted his sex life was ‘insane’ after dumping his wife of 38 years and mother of his three children for a woman almost half his age.

Now the 77-year-old lothario has been tamed once more and tied the knot with his much younger lover.

Nash, who had global success with pop groups The Hollies and Crosby, Stills, Nash & Young, walked out on wife Susan Sennett and their family home in Hawaii in 2016 for a new life in New York City with artist Amy Grantham, now 40.

The singer wed Grantham in two ceremonies in Scotland and Woodstock, the site in New York state of the famous hippy festival. ‘Amy is from Tallahassee in Florida, but she’s loved Scotland for about the last 15 years and she’s gone there every year,’ he tells me. 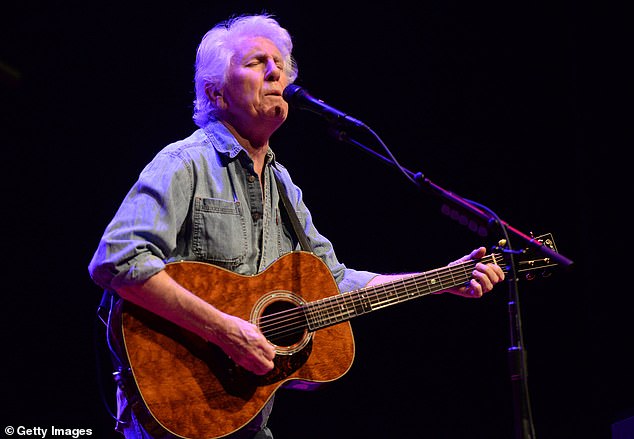 Rock and Roll Hall of Fame member Graham Nash of The Hollies and CSNY performs onstage at Saban Theatre on April 22, 2016, in Beverly Hills, California. He has married Amy Grantham, 40

‘She introduced me to the Scottish Highlands which I’m ashamed to say I’d never been to, and it is the most beautiful country in the world.’

In fitting with his alternative lifestyle, the couple married in a pagan ‘handfasting’ ritual in Scotland.

‘We had a special ceremony in the Highlands and then a couple of weeks later we got married legally because the handfasting — which has been going on for a thousand years in Scotland — is not a legal wedding.

‘Romantic? Absolutely. Legal? Not. So to be able to protect Amy from the slings and arrows of outrageous fortune, we decided we’d get legally married in a very small ceremony in Woodstock.’

Last year, Nash admitted that his three children by Sennett were very upset that he had left their mother for a woman of the same age as them.

Born in Blackpool, Nash was married to his first wife Rose Eccles from 1964 until 1966 and went on to date Joni Mitchell.

But his rock star lifestyle took its toll. ‘When you’re a musician on the road, it is very difficult to maintain any normal life.’

Asked if he’s confident his new marriage will last, Nash, who is touring the UK in July and August, says: ‘Yes. How long is the rest of my life? I’d like to make it to 100 and hopefully still be singing.’

Gigi Hadid might be one of the world’s highest-paid models, but at her 24th birthday party this week she found herself upstaged by a woman twice her age.

At her denim-themed bash in New York, the American blonde, inset — who enjoys an on-off relationship with ex-One Direction singer Zayn Malik — was joined by a gaggle of glamorous women, including supermodel Helena Christensen.

The 50-year-old ensured all eyes were on her when she arrived in a black lace bustier, jeans and a denim jacket draped over her arm.

Talking recently about how she keeps in shape by pole-dancing and boxing, Helena said: ‘There is a 75-year-old at the pole-dancing club who does it still and who looks amazing. I hope I’m boxing at 90.’ 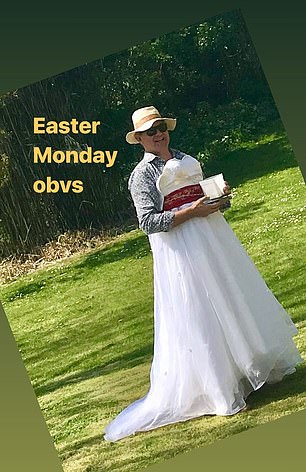 So Hugh’s the blushing bride?

Despite playing the stuffy Earl of Grantham in Downton Abbey, Hugh Bonneville likes to let rip off screen.

The 55-year-old actor showed a predilection for cross-dressing when he participated in an annual Easter egg roll.

‘Easter egg rolling in the South Downs,’ he explains of this picture online. ‘In a wedding dress. Don’t judge me.’

While he chose not to elaborate on his reason for wearing said strapless white frock — under which he sported a £75 Indigo Island shirt — Hugh received a thumbs up from Highclere Castle, where ITV’s period drama Downton was filmed.

A spokesman commented on the snap: ‘Style and taste.’ 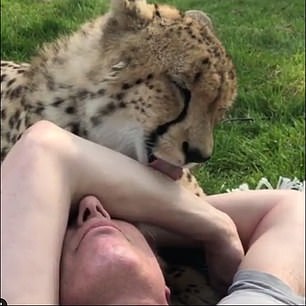 It’s a brave man who sunbathes alongside a wild cat. Damian Aspinall lay on the grounds of his Howletts Animal Park near Canterbury, Kent, with his beloved cheetah, Saba.

‘We are sending him back to the wild later this year, back to Africa,’ she tells me.

The couple hand-reared Saba and even used to share a bed with him.

Dragon with a grudge has a bite at Lady Brady

On the Apprentice, she is Lord Sugar’s straight-talking assistant, but Karren Brady has been condemned as a phoney by one of this country’s most prominent businessmen.

Duncan Bannatyne, the former star of BBC show Dragons’ Den, claims of Baroness Brady of Knightsbridge, who was elevated to the peerage by David Cameron: ‘She is the biggest hypocrite on this planet by a long way.’

Sports club owner Bannatyne, 70, was provoked into making the comment by a fan on social media who pointed out that Lady Brady had slammed ‘judgmental’ people who criticise the love lives of Strictly Come Dancing contestants.

She had previously made unflattering comments about Bannatyne’s marriage to Nigora Whitehorn, an Uzbek dental receptionist 31 years his junior.

He responded at the time by calling Baroness Brady a ‘nasty piece of trash’.

Actress Emma Corrin, who will play Princess Diana in the fourth series of The Crown, is proving to be an inspiration just like her royal alter-ego.

The 23-year-old blonde is campaigning against the use of plastics and yesterday took to social media to fight for her cause.

‘Our planet is glorious and it is the only one we have, so let’s do everything we can to protect it,’ she says.

‘Let’s focus on the change we can impact day to day — just a few things we can do are: use reusable bags, get a reusable water bottle and a coffee cup, think about eating a more plant-based diet, bear in mind what has gone into making the things you buy.’

‘As a person who enjoys eating out, is it really relevant now?’ he asks. ‘They’re a sort of judgment but do we need to be judged?’

But he admits that as a restaurateur: ‘I would say it’s the be-all and end-all.’

He is clearly all for having his gateau and eating it.

Glamorous TV presenter Charlotte Hawkins has no plans to give up alcohol like her Good Morning Britain colleague Susanna Reid, and says she is fond of a tipple.

‘At the end of a stressful week, there’s nothing I like better than having a gin and tonic or a glass of wine,’ the 43-year-old says.

‘I couldn’t get through the week if I didn’t have that as my prospect at the end of it.

‘I can’t even do dry January through to the end, so I would not be a very good person to give it up completely.’

‘Recently, I realised how much I’d learned from the show about medical procedures,’ she says.

‘On my way to work I came across a guy unconscious in the street. I went into ‘Connie’ mode — checking his airway, putting him into the recovery position, and making checks on him and calling an ambulance. It was rather weird after that to go into work and pretend to be ‘medical’!’

Dumbo star Colin Farrell refuses to let fame get in the way of his daily routine.

Asked what he’d do for a day if he weren’t famous, he tells me: ‘Same thing I do every day. I live a non-famous life.’