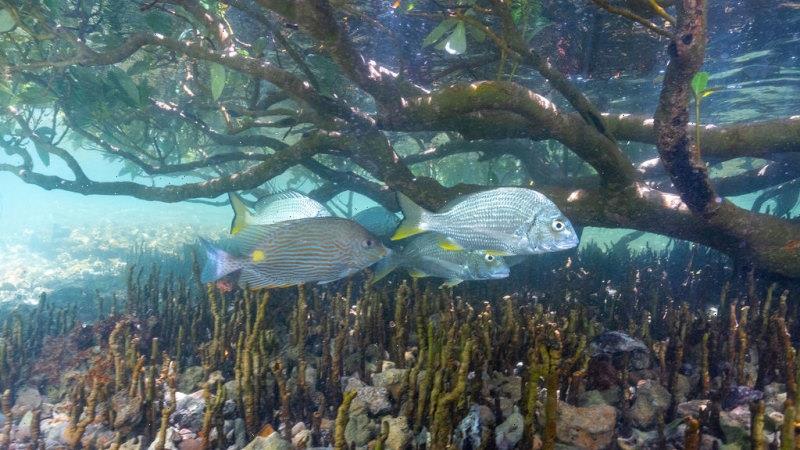 Hiding in plain sight: Scientists discover an extra 76,000 hectares of mangroves in WA

Mangrove forests are important carbon stores and nurseries for marine species and cover a thin strip of coastline in the north-west of Australia, stretching some 4000 kilometres from Shark Bay to around the top of the Kimberley.

But despite the advent of satellite technology, the full extent of the remote and hard to access ecosystems has been underestimated for a myriad of reasons including massive 10-metre tides obscuring tree tops in places like the King Sound at the top of Western Australia. 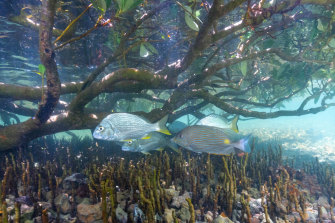 Mangroves like this one near Exmouth are an important nursery and hunting ground for multiple fish species.Credit:Blue Media

The low density of mangroves on the arid Pilbara coast, which has fewer plant species than the Kimberley and trees that do not grow as tall, has also made it difficult to differentiate from other habitats using satellite imagery.

A new research paper in the journal Remote Sensing has revealed a 32 per cent increase on previous global datasets for mangrove coverage in WA, taking the total up to 276,538 hectares.

Knowing the extent of the mangroves is an important step in bridging the knowledge gap for an understudied environmental aspect in the north-west, with rising industrial pressure on the coast because of new salt, potash, hydrogen and renewable energy proposals. 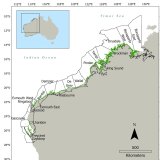 A map of mangrove extent from Shark Bay to the Kimberley. There is also a small amount of mangroves in Bunbury.Credit:Remote Sensing

Land clearing has been the biggest cause of global mangrove loss in the past century and in the same period, climate-related events have been responsible for about 38 per cent of the decline.

A greater focus on carbon storage capabilities has also been put on mangrove systems, which keep large amounts stored in the soil, after scientists recently developed a carbon credit method for their restoration.

Mangroves in the subtropical Kimberley region can store as much carbon as Australian rainforests or about half as much in the Pilbara. Mangroves make up less than 1 per cent of the country’s forest coverage

University of Western Australia researcher Dr Sharyn Hickey was the laed author on the new paper and was able to determine the breadth of North West mangroves by analysing time points over a four-year period.

This is because peak canopy coverage, or greenness, fluctuates with the El Niño-Southern Oscillation – four-year weather cycles of varying winds and sea surface temperatures.

“It’s a significant finding because mangroves are at the forefront for mitigation activity with storing and sequestering blue carbon or providing coastal protection,” Hickey said.

Previous research, including a study by Hickey in Mangrove Bay near Exmouth, has found dieback can happen in El Niño conditions, which coincide with low sea levels and little rainfall on the west coast. 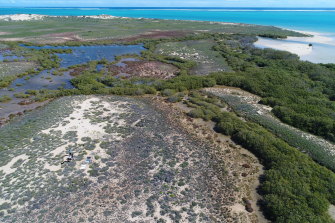 Dry conditions in a 2015-16 El Niño year led to a 7000-hectare die-off of mangroves in the Gulf of Carpentaria in the Northern Territory, which resulted in millions of tonnes of carbon being released from the soil.

Hickey’s latest paper did not delve into how climatic changes have impacted the broad area of North West mangroves, but she said there was a need for further research to explore and understand how climate was influencing their footprint.

The mangroves of the North West are a hardy group.

In the Kimberley, they must deal with periods of complete inundation by seawater and then the extremes of drying up with no tide at all.

Both the Pilbara and Kimberley fall within the state’s cyclone alley and can suffer big die-offs from destructive winds and seas.

But it is sea level rise that will have one of the biggest impacts on North West mangroves.

The United Nation’s International Panel on Climate Change said in a report three years ago that by 2100 the ocean could be 30 to 60 centimetres higher by 2100 even if greenhouse gas emissions are sharply reduced and warming is limited to below 2 degrees celsius.

If emissions continue this could be more in the range of 60 to 110 centimetres.

University of Queensland marine ecologist Professor Catherine Lovelock has studied mangroves for decades including in WA and says these systems would start retreating inland as sea levels increased.

She said in accepting northern WA as an industrial hub, there has to be room left for the mangroves so they don’t run into literal walls.

“There’s really not enough formal protection for coastal ecosystems in the north … it would be good to have a more systematic approach rather than what’s leftover from the mining industry,” she said.

Lovelock said development in the North West should look to nature-based solutions and how mangroves could be used to protect infrastructure.

The academic also wanted to see a greater focus on the cumulative impacts of industry, something the WA Environmental Protection Authority has flagged it could do as an extension of its recent study on the Exmouth Gulf.

Industry has had a firm foothold in the Pilbara for decades, but Geoheritage practitioner Vic Semeniuk has been one of the voices championing its significance as having the most diverse and complex arid coastline in the world.

“The Pilbara Coast is a coastline of global significance and, ideally, it should have been inscribed as a site of World Heritage as representative of an arid coastal system that markedly contrasts with other arid coasts worldwide,” Semeniuk wrote in 2015.

“From an Australian national perspective, it is the most arid coast in Australia and should have been inscribed as a site of National Heritage.”

Because of a lack of current data on industrial influences on mangroves, the EPA tasked the Kerry Stokes-backed Mardie salt and potash project south of Karratha, through its initial environmental approval, with proving it would not have an adverse impact on the Robe River Delta mangroves.

The proponent, BCI Minerals, also has to spend money on researching the impact of sea level rise on mangroves, samphire and algal mat areas on the Pilbara coast, and map the extent of the latter two vegetation types.

The EPA is still considering another salt project off the Exmouth Gulf while oil and gas giant BP recently bought a major stake in the proposed $US36 billion Asian Renewable Energy Hub near 80 Mile Beach, which is also home to mangroves.

The hub would cover a 668,0000-hectare site with wind turbines and solar panels but was knocked back by the federal government last year because of the potential to create a toxic dead zone because of plans to disturb 345 hectares of seabed at the nearby RAMSAR-listed beach.

A revised application is expected to be made.

“It’s a concern we don’t know what the baseline extent has been or what the level of impact has been over the last few decades and yet there are more big proposals that have implications for mangroves,” he said.

The Bear, one of the year’s best TV shows, is finally coming to Australia