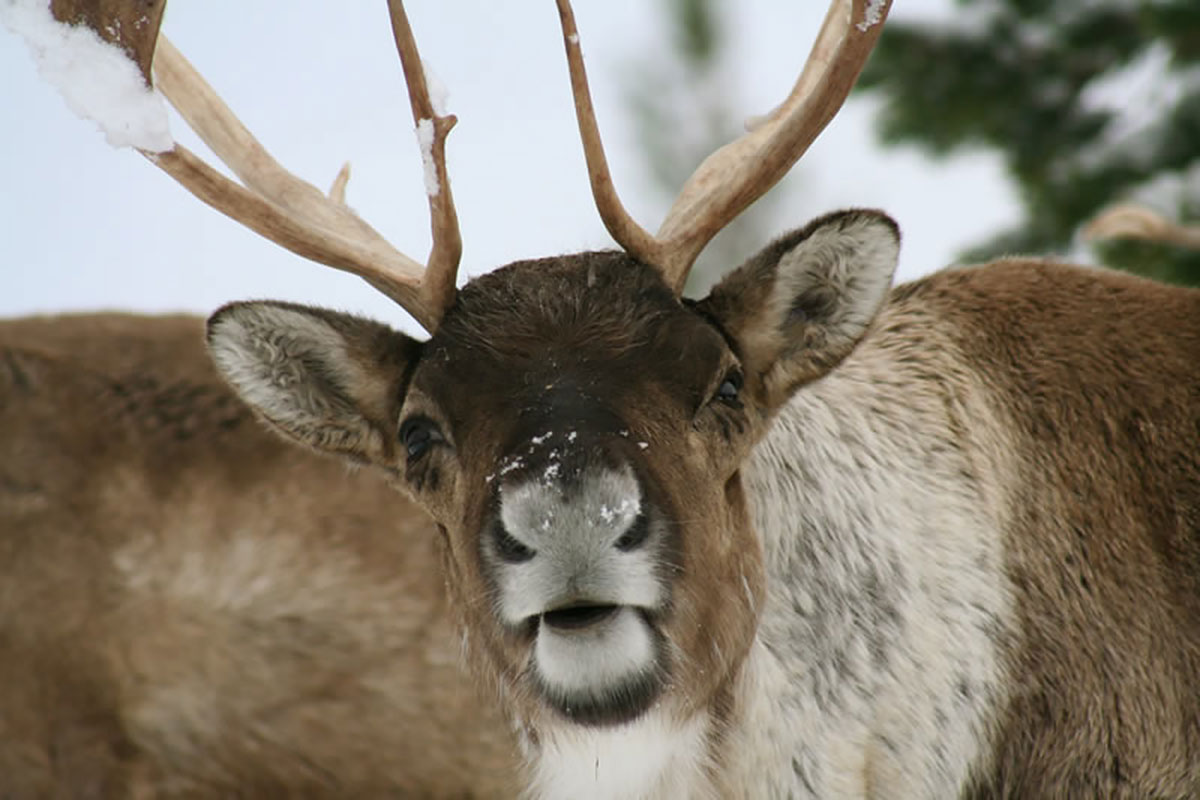 “On Dasher, on Dancer, on Prancer” … you recall the most famous reindeer squad of all, right?

Sure, you know the Rudolph song and the legend of Santa’s sleigh-pullers. But have you heard this special species of deer, called caribou in North America and native to Arctic and subarctic regions, is considered “vulnerable” by the International Union for Conservation of Nature (IUCN) Redlist? That’s just one step below endangered, and their population has declined by 40 percent over the past 10-30 years. Not such a jolly tale.

Currently, reindeer inhabit North America, particularly Alaska and Canada, as well as Greenland, Norway, Finland, Russia and Mongolia. There are only three wild reindeer — all female, known as the Selkirk herd — left in the lower 48 states, according to the NRDC. The small group of migrant animals spend time in Idaho and Washington, but may soon vanish forever. Canada’s South Purcells herd in British Columbia is in a similarly bad spot; there may be just four individuals left.

We realize this news is a downer during the holiday season, but it should also help inform animal-lovers — and Christmas fanatics — about those “Winter Wonderland” sleigh rides and seasonal displays they attend. After all, Santa is making a list and checking it twice; he’s going to find out who’s naughty or nice to reindeer.

Similar to, say, bunnies and chicks at Easter time, many reindeer around the world are exploited right now. Though they belong in and around the North Pole, PETA reports that the animals are often hauled across countries and made to pull too-heavy loads, fed poor diets and infected by diseases of domestic livestock.

PETA Senior Vice President Lisa Lange tells PEOPLE, “There’s nothing merry about using live animals as holiday ornaments. Reindeer belong in Arctic and subarctic regions, where they can roam freely over vast open ranges, but most of those in captivity are held inside tiny sheds, put on public display and used for photo ops. Cruelty and neglect are inevitable when sensitive wild animals are reduced to novelty accessories, and PETA urges people to celebrate the season without compromising the well-being of animals.”

The good news is, there are still some places where the general public can meet and greet reindeer in a natural environment. One such herd is the Cairngorm Reindeer Herd, located in the Cairngorms National Park, about 6 miles from Aviemore, Scotland.

Tilly Smith, who runs the Reindeer Centre, is the co-owner of the U.K.’s only free-range herd and has cared for these animals, along with her family, for nearly 40 years. Reindeer were once native to Scotland, though went extinct there hundreds of years ago. This herd originated in Sweden, but was reintroduced to the Scottish Highlands in 1952 as part of a successful experiment. Nowadays, the herd is 150 strong, and rumor has it they’ve even appeared on Game of Thrones. PEOPLE spoke to Smith to find out more about this majestic, popular and enigmatic animal. (She also reminded us the plural of reindeer is “reindeer,” not “reindeers”!)

Never mind red noses. We hear reindeer have furry noses and can see UV light. Is that to help guide Santa’s sleigh?

They do indeed have furry and warm noses. This prevents frostbite and aids them to smell food under the snow. They can also see UV bands of light, which is very important in the ‘snowscapes’ of winter in the Arctic.

If your herd allows people to pet them, how do you know which ones are people-friendly?

The only time people are allowed to ‘pet’ or stroke one of the reindeer is when the reindeer are in their mountain environment during a guided tour. There is always an experienced reindeer herder with them, and if a reindeer chooses not to be touched, he or she just walks away; the choice is theirs.

When we are handling the reindeer, and if they are in confined spaces, we do not allow indiscriminate petting of the reindeer. But if the reindeer chooses to stand beside someone who then strokes them, then that is fine because it is the reindeer who has made that choice. We do not encourage any ‘petting’ of the young at all.

Reindeer are domesticated animals, which may surprise people. How are they like or unlike horses or other farm and working animals?

Reindeer are indeed a domesticated animal, and man has domesticated reindeer over many thousands of years. In terms of their behavior, when being handled, ridden, pulling sleighs, etc. they are exactly the same as horses or ponies and other farm animals. In many respects I would say they are easier [and] more trusting, as long as they are ‘worked’ within a ‘team’ (in effect, a small herd) because they are highly social animals.

However, there is one fundamental difference between the domestication of reindeer compared with more traditional farm animals like cows, sheep, goats and horses. That difference is in how they live, even when domesticated. Cows, sheep, etc. were taken out of the natural environment and enclosed in fields for agriculture, but reindeer were kept in the natural habitat, i.e. the Arctic and subarctic, and man had to live as a nomad, following the herd. As a result, domesticated reindeer look no different to their wild cousins (like caribou), but cows and sheep look very different to their wild ancestors.

Speaking of farm animals, we hear people can drink reindeer milk. What is it like?

Very rich, like many other Arctic mammals, the fat content is very high. Reindeer are only milked by the forest reindeer herders, and they turn it into a ‘cheese’ that keeps and they can eat in the winter. There is some drinking of the fresh milk, but reindeer produce very little; they are not like a dairy cow.

As working animals, reindeer are known for pulling sleighs. Besides the Arctic and tundra, is it OK for them to live in other climates and environments?

Reindeer do not thrive in permanent captivity, in small fields and too far south. Unlike traditional livestock, they must live in an environment as close to their natural habitat as possible, which means large areas of mountain range with strong seasonal changes.

If reindeer are being expected to pull sleds, be ridden or packed and travel over vast distances (like the Nenet in Russia), then they can only do this in their natural habitat of snow and/or marshy ground, which is found in the tundra and taiga. When we train our reindeer to pull a sleigh, this is at a slow walking pace, never more than about a half-mile per hour, and if there is an incline, the person at the back pushes. If Santa is overweight he has to get off the sleigh! Their task is definitely not onerous in any way.

Parades tend to be on smooth roads, the wheels of our sleigh are pneumatic, and there is very little effort involved for the reindeer.

What is your take on reindeer (or caribou) care and welfare during the holiday season?

The welfare and proper care of our reindeer is paramount and we know them all individually, their characters, foibles and who will work well with who. Our reindeer handlers are extremely experienced and our knowledge has been gained by experience over many years. Myself and my husband have been intimately involved with the herd for the last 40 years and we have been doing events at Christmas time with our reindeer since then. Our transport is specially designed for reindeer, with plenty of space and thick bed of straw.

Beyond the winter holidays, what do your reindeer do during the rest of the year?

All of our herd free ranges in large tracts of hill ground, most of it above 1,500 feet. Depending on the time of year different groups are roaming in various areas. All winter, the whole herd free ranges in the mountain environment. During calving in spring, the pregnant females come into our very large hill enclosure (1,000 acres) for calving, where we can monitor them a little more closely and get to know the newborn calves.

In the summer, we have our male reindeer in that same enclosure while the females, with and without calves, range outwits the enclosure on the higher ground. Come the rut in autumn, all the reindeer are gathered and split into breeding groups to ensure good management of genetics and control of herd numbers. During November and December, we have the trained ‘Christmas reindeer’ up on the hill, but available to go out in teams of four to six to do events for us. We have visitors all year ’round, regardless of the weather, but we are busiest in the school holidays.

Smith also tells PEOPLE she has a new book out about the herd called Reindeer, An Arctic Life. It is widely available, sold at Cairngorm Reindeer Centre, as well as worldwide outlets like Amazon. All sales of the book directly benefit this unique herd, so it makes the perfect gift for your nature-loving and/or Christmas-crazy friends and family.

You can also “adopt” one of the members of this free range herd! Meet them all here.

Priyanka Chopra May Look Taller Than Nick Jonas, but Turns Out, It's Just an Illusion
World News