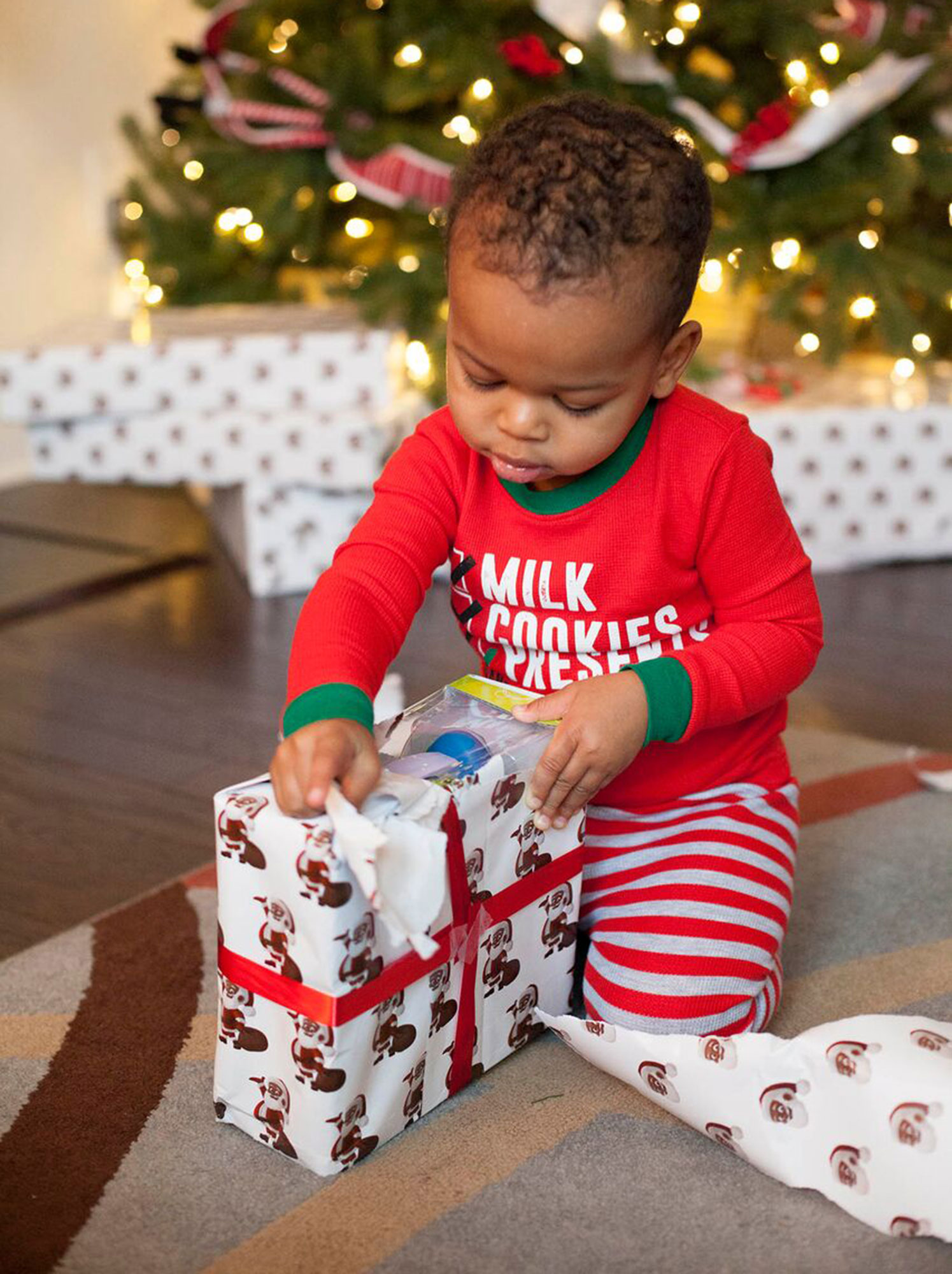 Three years ago, Jackie Rodgers was preparing for her son, Eli’s, second Christmas, and wanted everything to be perfect. But her holiday plans hit a snag when she couldn’t find wrapping paper with a brown Santa Claus.

Her son has brown skin, so Jackie was on a mission to find appropriate Christmas wrap. Unfortunately, she wasn’t able to find wrapping paper with a dark-skinned Santa near her Apex, North Carolina, home. So she reached out to her sorority sisters from her alma mater, Clark Atlanta University, who checked stores in Atlanta, Detroit and Chicago.

They couldn’t find any either and an online search yielded no results. So, Jackie decided to make the wrapping paper herself. She launched Greentop Gifts, a wrapping paper and gift company that sells products that feature a Black Santa Claus Jackie calls Clarence Claus.

Jackie remembers what her own mother did when she couldn’t find brown Santas.

“When I was little my mom would paint the ornaments brown, color the paper, color the cards, color the angels,” Jackie says.

Jackie’s husband, Shaun, 37, says his mother used to color in the white Santa too. Yet he didn’t take his wife’s business idea seriously — until he researched just how much paper is sold during the holiday season.

“I thought, ‘Wow, maybe there is something here,’ ” Shaun, sales director for a software company, tells PEOPLE. “We understood there was a void to be filled.”

To make her dream come true, Jackie searched online for an illustrator and found one based in Ghana. The first illustration was exactly what she wanted: a man’s cartoon face with the requisite white beard and the familiar red Santa hat with the white brim and pom-pom, only this character has brown skin.

“I wanted him to appeal to children and adults,” she says. “I wanted him to look magical. I wanted him to be the perfect chocolate brown, and look plump and jolly, and he definitely does. I like the look of his eyes; he looks happy and whimsical”

As for choosing the paper, that was easy too.

“I love paper, my friends call me a stationary snob,” Jackie says. “I wanted really quality paper, and when it folded it creased well.”

The company, Greentop Gifts, is named for the bar and restaurant Jackie’s grandfather owned, and Clarence is her late father’s name. With that, brown Clarence Claus wrap was on its way. They started production early in summer 2015, and Eli had Clarence Claus wrap on his gifts that Christmas. So did thousands of other gift recipients.

“We filled orders out of the garage until Black Friday,” Jackie says, at which point sales were so swift they had to hire a fulfillment company. “It’s a good problem to have.”

Both Jackie and Shaun still have full-time jobs, and work on Greentop in their spare time. Preparing for their third Christmas in business, they have just welcomed a new baby girl, Cameron, into their family, which puts Jackie on maternity leave from work as the holiday season gets busier.

Though the couple now employs a small team, “I’m still in a Christmas rush,” Jackie says.

Clarence Claus is now emblazoned on gift tags, t-shirts, sweatshirts, baby onesies, socks, baseball hats, and mugs. More than 15,000 rolls of wrapping paper have been sold, and Clarence has made his way under Christmas trees in all 50 states and as far away as Japan.

Gayle King, anchor of CBS This Morning, is also a fan. The day after Christmas last year, she shared an Instagram photo of herself in a Clarence Claus sweatshirt.

Thankful parents and grandparents write to Jackie, including moms of biracial families, adoptive families, and even white families who want their children to respect diversity.

“I read the letters and think, ‘oh, we’re doing the right thing,’ ” she says. The Rodgers are working on new designs featuring brown people for birthdays, graduations, and other occasions.