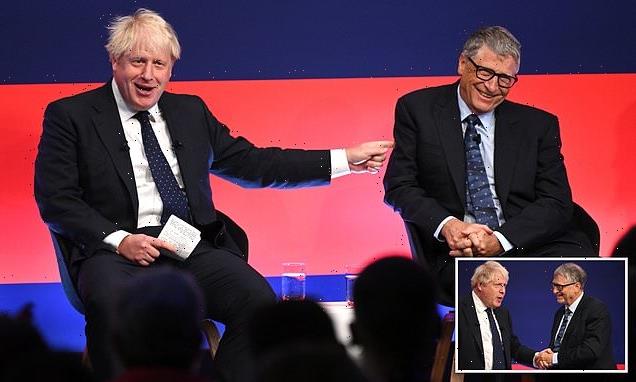 The hour was barely cappuccino o’clock and already the Prime Minister was speaking the only kind of language the pinstriped money men can understand.

No, he wasn’t discussing currency swaps or derivative trading. I’m not sure Boris knows the difference between an ISA and Isis.

Instead, he was paraphrasing Gordon Gekko, that brylcreemed sleazebag Michael Douglas played in the classic 1980s movie Wall Street, who remains a pin-up for rapacious financiers everywhere.

‘Green is good,’ the PM misquoted Gekko – who talked about the virtue of ‘greed’. ‘Green is right. Green WORKS!’

Welcome to the inaugural Global Investment Summit, a shameless tin-rattling exercise designed to persuade wealthy backers to hand over oodles of wodge to fund the UK’s green energies of tomorrow.

Some £17trillion worth of investment clout had turned up apparently.

This was an audience that reeked of juicy spondulicks. Even the dental work on display here probably cost more than most people’s education. 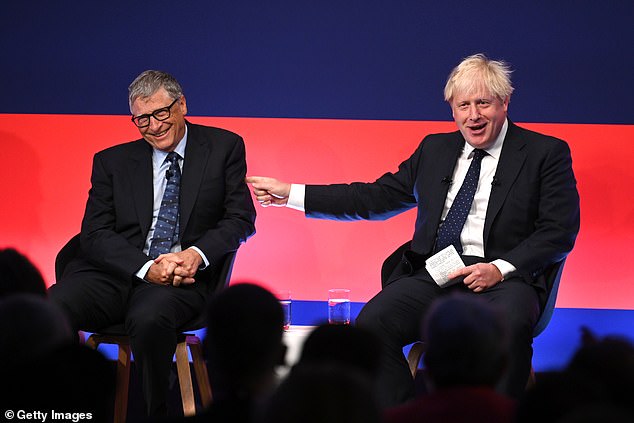 Boris was in full salesman mode. You could see how much stock he puts in all this green malarkey by the amount of effort he’d put into his language. It was a speech designed to loosen the purse strings: Long on snorts and giggles. Boosterism-a-plenty.

Our venue was London’s Science Museum, that heady celebration of successful innovation – steam engines, rockets, life-saving medicines etc. ‘The cornflakes that got to the top of the packet,’ as Boris described them.

Yet, as the PM pointed out, so many ambitious projects never made it to the production line.

The televisions that didn’t switch on, or the cars designed to ‘run on rhubarb wine’, which left their inventors ‘blubbing in their scorched garages’.

The PM excels at these sort of speeches. He makes techie stuff seem exciting.

Proto turbines, gigabit broadband – the phrases roll off his tongue with a gastronome’s relish. He might have made a heck of a science teacher, as long he could have avoided blowing up the laboratory.

Some of the Borisisms he’d composed were particularly ornate. He talked of the UK being the first industrialised nation, hence ‘the first to knit the deadly tea cosy of CO2 that is now driving climate change’.

Did that get the crowd’s cheque books flapping? Time will tell. But they certainly got a decent show.

Moments later, Boris was joined on stage by Microsoft founder Bill Gates for a discussion hosted by the PM’s Cop26 spokesman Allegra Stratton. Ms Stratton, you may recall, was hired not all that long ago to be the Downing Street press secretary until April, when she got the unglamorous task of preparing the upcoming eco summit dumped on her lap. Poor thing. 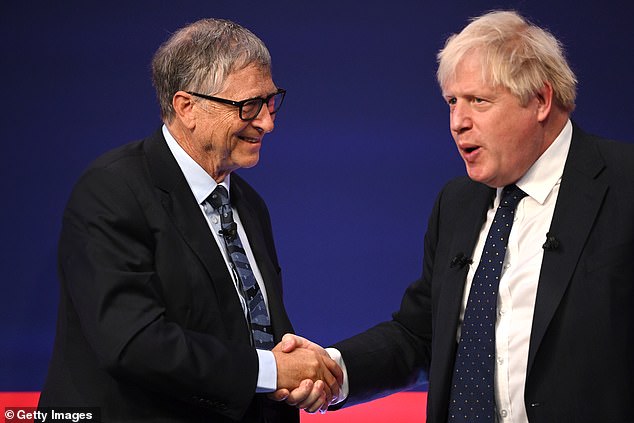 Boris was in full salesman mode. The Gates circuits, though, did not respond. The eyes simply gazed ahead, lifeless as a mannequin

Imagine spending the past six months in a mid-market Glaswegian hotel sampling the all-you-can-eat breakfast buffet with Alok Sharma for company.

Mr Gates dawdled on, looking rather confused. Remarkable how little he’s changed over the years: Same glasses, same five-quid haircut, same drawling, Kermit the Frog delivery. He was there to talk up some of the less well-funded green ‘technarrrlagies’ as he put it. There was a brief disagreement over how much money Gates and the UK had agreed to stump up. Boris said £200million each. Gates said it was £400million.

‘400 each?’ Boris replied, suddenly making trout-like gulping noises. ‘Well hang on. I’d think we’re going to have to go back to the Chancellor…’

Boris was clearly kidding around, but like most billionaires Mr Gates evidently doesn’t regard money as laughing matter. He simply glanced down blankly at the toe of his brogues.

Soon the PM was making daft nudge-nudge, wink-wink gestures at the audience, telling them how much money they could make out of alternative energy. Wind power, for example, was a ‘licence to print money’, Boris said, though he admitted the sector had been a little short on puff recently. He suggested summoning Aether, the Greek god of pure air.

‘We could sacrifice a goat or something,’ he joked.

‘Lots!’ said Allegra, a little too enthusiastically. ‘But in a humane way,’ Boris added. The crowd heartily guffawed.

The Gates circuits, though, did not respond. The eyes simply gazed ahead, lifeless as a mannequin. Http://error. Bad gateway. 404 Page not found.

Poor Allegra could have done with reaching over and switching him off and on again.