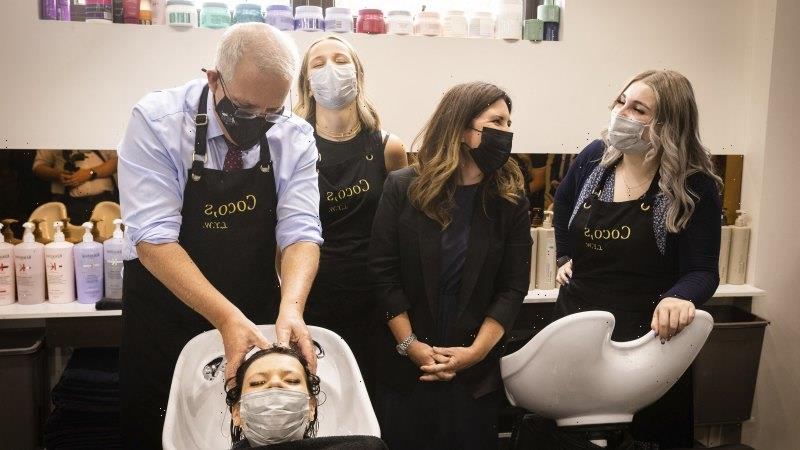 Hairdresser stunt shows a prime minister who refuses to listen

On the campaign trail in 2016, when I was the Liberal candidate for the seat of Chisholm, one of my “campaign calls” was with the former foreign minister Julie Bishop. We did a street walk, then went into my local hairdresser, our hair wet from the rain. The minister took a seat and the delighted hairdresser blow-dried Bishop’s hair for her. The visit worked. The ever personable Bishop looked understandably “at home” in a hairdressing salon and the publicity heightened my relatively unknown profile among voters.

On Friday, Prime Minister Scott Morrison tried a similar stunt and visited a women’s hairdressing salon on the Mornington Peninsula, where he washed the hair of a young woman, reportedly a first-year apprentice, and gave her a head massage. He then asked the female hairdressers gathered around him if he should ask the woman about her weekend and do some gossiping. 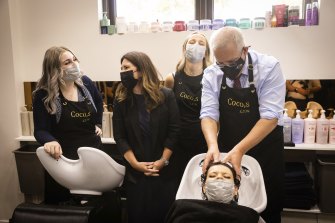 Prime Minister Scott Morrison washes the hair of an employee of Cocos Hair Salon in Mount Eliza on Friday.Credit:Paul Jeffers

Whatever its purpose, the visit didn’t work. His remarks suggested a dated and shallow understanding of women, and the images of the Prime Minister’s hands massaging the apprentice’s scalp and temples stirred a visceral reaction in thousands of us, including me. Not in a good way.

These ministerial or prime ministerial visits to small businesses such as hairdresser’s and cafes involve precision planning and co-ordination, down to the last minute. Often the participants are known to the party MPs or candidates. But there’s an obvious difference between Bishop’s hairdresser visit and Morrison’s.

It’s one thing for a high-profile senior minister to get her hair done in front of the cameras. It is quite another for the Prime Minister, the most powerful man in the country, to organise to be filmed washing a young woman’s hair. This is particularly the case for a prime minister who last year self-inflicted major reputational damage when it comes to women.

On the same day as the hairdresser stunt, and in advance of a National Press Club address this week by Brittany Higgins and Grace Tame, the government made yet another announcement about respect for women in the workplace: a multi-party leadership taskforce to oversee the implementation of the recommendations of the Jenkins report. One hopes this isn’t yet another announcement in lieu of real action. 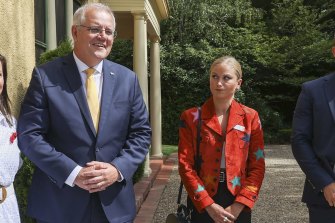 Scott Morrison and Grace Tame at the Lodge in Canberra last month.Credit:Alex Ellinghausen

In 2021, the federal government made numerous announcements, started and stopped inquiries, shelved or gave fleeting consideration to reports and partially implemented recommendations. There was so much ducking and weaving it was hard to keep up. Very little action. Lots of political spin.

This inaction was juxtaposed against the constant burden of women telling their stories. That collective voice still echoes loudly. That’s why the Press Club address by Higgins and Tame on Wednesday, a week after the Prime Minister’s address at the same venue, is the perfect entry to 2022 and a strong message to the government that the issue of women’s rights is here to say. The power in the dual presentation of these two remarkable women speaks for itself. Tickets for the event sold out in record time and I’m excited that I’ll be there in person to hear Tame and Higgins speak.

Last year was one I’ll never forget. I formed enduring friendships and connections with people from across the country, including Higgins, Tame and former Australia Post chief executive Christine Holgate. We are four women with different backgrounds, from different parts of Australia, but we have been brought together by a common grievance around the abuse of power, a common bond and a common cause.

We are part of a larger collective voice that shouts the same narrative, insisting on real action to make women safe, respected and equal. For centuries, political spin and PR, like Morrison’s hairdresser visit, have been used by those in power to either drown out, silence or distract from the voices of women who have challenged the patriarchy.

But the collective voice that roared through 2021 is not going away. It is a voice bolstered by the friendship, support and love of hundreds of thousands of women and men across Australia, and it demands action, not announcements. It is a voice that will withstand any amount of political spin aimed at quashing it – including visits to the hairdresser. I look forward to hearing my friends harness it once more at the Press Club on Wednesday.