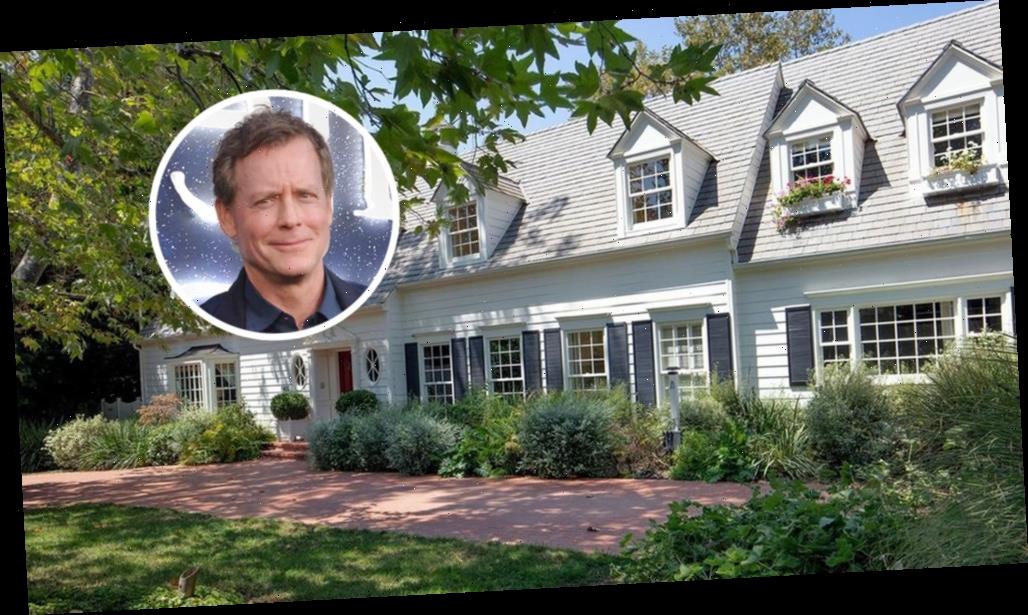 Film and television actor Greg Kinnear, nominated for an Oscar in 1998 for the award-winning film “As Good as it Gets” and, more recently, co-star of the British feature-length dramedy “Misbehaviour,” in which he portrays late showbiz legend Bob Hope, has hung an almost $6.6 million price on his celeb-pedigreed home in L.A.’s rustic and swish Mandeville Canyon area. The asking price is edging up near twice the $3.6 million he paid for the property in 2001, when he bought it from Michael Lee Aday, a veteran rock star better known to the world as Meat Loaf.

Out of sight behind a humongous hedgerow and sequestered behind secured gates, the handsome clapboard-clad and dormer-roofed New England-style Cape Cod home offers nearly 5,100 square feet of understated (and arguably somewhat staid) traditional luxury with five bedrooms and 5.5 bathrooms. The listing is held by David Offer at Berkshire Hathaway HomeServices California Properties.

The center hall entry is traditionally flanked by formal living and dining rooms, the former done in dulcet shades of baby blue and butter yellow with a bay window and fireplace, and the latter wrapped in delicate Chinoiserie-style wallpaper that depicts a variety of birds sitting on thin, arched branches. With black marble countertops on cream-colored raised-panel cabinets and a huge center island with integrated snack bar, the kitchen’s vaguely vintage vibe is amped up with a fully restored antique range/oven combination. Completely open to the kitchen, the family room has more pale blue furnishings, and a sunny breakfast room offers a cushioned built-in banquette and café curtains over classic six-over-six pane sash windows. There’s also a small library/study that showcases a wood-paneled and black-marble corner fireplace next to French doors to the backyard. A separate office also spills out French doors to the verdant gardens, and it appears the two-car garage has been converted to a patriotic-minded children’s playroom where the roll-up door has been painted as an American flag.

In addition to a main floor bedroom for guests, there are three more ample en suite guest and family bedrooms upstairs, along with the homeowner’s retreat. The spacious, sparely furnished master bedroom has a fireplace, and the good-sized master bathroom sports margarine yellow walls offset by intricately veined charcoal-grey granite.

French doors in many of the main floor rooms open to a brick-paved and skylight-topped porch that provides plenty of room for shaded al fresco dining and lounging. Massive Sycamore trees shade a lush stretch of lawn and a large pergola overlooks a rectangular pool with scalloped corners.

Curiously, Kinnear also owns a neighboring home that he surreptitiously scooped up in a 2017 off-market deal for exactly $3 million.

The One Show viewers distracted as they spot BBC blunder ‘Sort it out!’