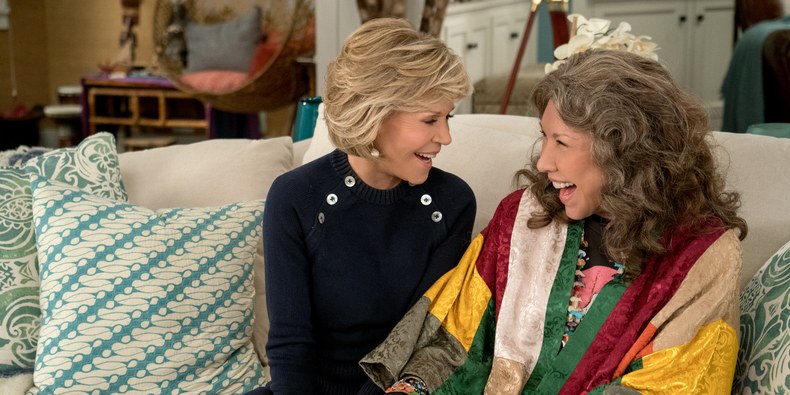 Over the course of four seasons of Grace and Frankie, Jane Fonda and Lily Tomlin, as Grace Hanson and Frankie Bergstein, respectively, have watched their husbands (Martin Sheen and Sam Waterston) divorce them and marry each other, started a vibrator company targeting older women, moved into a beach house together, and, as of the end of the fourth season, been tricked by their children (June Diane Raphael and Brooklyn Decker as Grace's daughters, and Ethan Embry and Baron Vaughn as Frankie's sons) into moving out of said gorgeous beach house and into an assisted living facility. Grace and Frankie have never been ones to settle for a quiet retired life, though, and if the new trailer for season five is any indication, they'll escalate their usual hijinks to any extent necessary to get back at their families for "Parent Trapping" them.

The trailer and, presumably, the new episodes open with Grace and Frankie realizing they've been duped and promptly commandeering a golf cart to escape the assisted living facility. Upon returning to the beach house, they vandalize its "Sold" sign, go head-to-head with a realtor (played by RuPaul, assumably as a warm-up to his own Netflix series), and begin squatting in the empty home—surrounded by all the essentials: vodka, pills, a fondue pot, and two pet pigs—until their kids and ex-husbands seemingly agree to let them move back in.

Still not content to return to business as usual, the duo embark on a mission to live carefree lives, with a Nirvana tee-clad Tomlin drinking 7UP straight from the three-liter bottle and vowing to return to her "raw, uncompromising, dangerous" ways, and Fonda establishing "fuck it" as their new mantra. Pursuing that carefree lifestyle, apparently, leads them straight to a burgundy-clad cult (reminiscent of another hit Netflix show), whereupon they realize that "the 'fuck it' life" is actually much more difficult than it seems.

World's oceans are heating up more rapidly than we thought