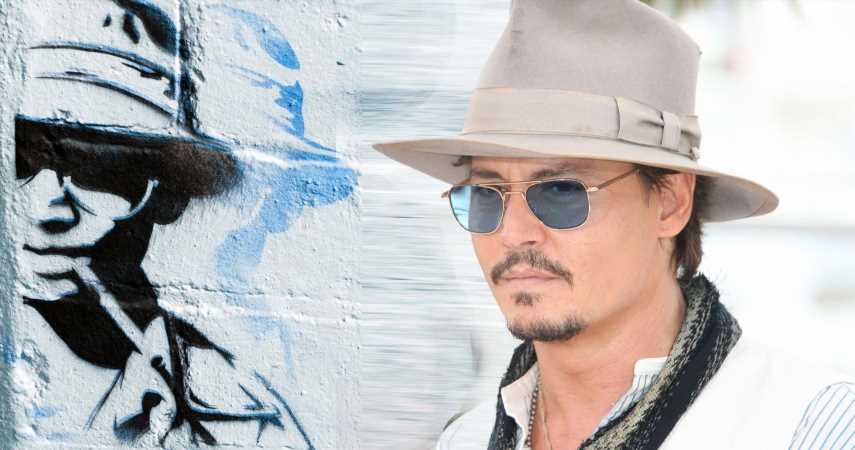 Unlikely celebrity friendships both inspire and encourage the public. Whether it be the relationship between Elon Musk and Kanye West, or between Snoop Dogg and Martha Stewart, seeing people from different backgrounds, in different fields, and with differing perspectives provides us with a sense of hope and tolerance that beneath the surface, we are all just human beings looking for compassion and acceptance. One of the most inspiring and glorious examples of this kind of unconditional friendship is the one between Johnny Depp and journalist Hunter S. Thompson.

Hunter S. Thompson founded the movement of gonzo journalism, a new age or reporting that required subjective viewpoints in order to achieve objectivity. This resulted in several monumental books including the debut Hells Angels, the critically acclaimed Fear and Loathing in Las Vegas, and the political masterwork, Fear and Loathing on the Campaign Trail. Whether his subject was at outlaw biker group, the President of the United States, or himself, the result was always a monumental literary effort that pushed the field of journalism into uncharted territory that resulted in both praise and voracious criticism. It is then no surprise that Thompson and his cinematic counter part Johnny Depp would get along so famously, as Depp’s career seemed to mimic aspects of Thompsons. Depp portrayed his characters with an element of personal attachment that allowed the audience to feel as though they were getting to know the man through his pretend portrayals. His cynicism, purity, and chaotic good demeanor brought him into the spotlight, and, into the hazy-tinted shades of Hunter S. Thompson.

The dynamic duo first met when Depp, a fan of Thompson’s work, went to the Woody Creek tavern in Aspen, Colorado to meet Thompson at one of his local watering holes. Both of the avant garde icons were from Kentucky and shared the same southern sentimentality of misunderstanding. Legend has it, Thompson entered the bar with an electric cattle prod and taser. Shortly after, the duo got along famously. They went back to Thompson’s Owl Farm and shot shotguns, built bombs, and launchd bombs they shot with guns.

The duo then went to Cuba together after Depp received phone calls at all times of the night. The relationship continued and by 1997, Depp was living in the room across from Thompson’s War Room. During their time as roommates, Thompson wrote articles on his meeting with Bill Clinton, his impressions of George Bush, and published countless articles with Rolling Stone. Then, Depp agreed to play the fictionalized version of Thompson, Raoul Duke, in the 1998 feature film Fear and Loathing in Las Vegas.

Depp’s passion for the partnership stemmed beyond the role and ultimately led to Depp convincing Thompson to publish The Rum Diary, Thompsons only novel. Depp would later go on to portray the semi-autobiographical character in the feature film adaptation in 2011.

Depp also paid homage to his surrogate family member through the animated feature film Rango. The story was partially inspired by Thompson’s works and alluded to his influence throughout. It was the third film that Johnny Depp starred in that honored his friend Thompson.

The friendship between the two cult-classic icons stemmed well beyond the feature film collaborations and mutual influence and respect. Together, the duo could be seen traveling throughout Colorado and Los Angeles at cultural staples like The Viper Room alongside other celebrities including John Cusack. The duo took trips together, both to physical locations and on drugs within the compound Owl Farm. They shared ideas for films, concepts for books, and talked about being two of the most misunderstood monsters of culture to date.

Thompson would refer to Depp as Colonel and when the two were apart, they would talk on the phone constantly, hatching plans for future travels in bizarre coded language that only meant something to one another. During the filming of Fear and Loathing in Las Vegas, Thompson shaved Depp’s head, the ultimate baptism in the Freak Power movement. Together, the two shot 12-gauge shot guns, built a variety of explosives, launched fireworks, and rejoiced in the rebellious nature that stems from freedom. Depp was also given access to some of the more private journals of Thompson during this phase, some of which he said made him come across as gentle, humble and honest, while others seemed to showcase that Fear and Loathing in Las Vegas was a stripped down version of the true carnal chaos that emerged during Thompson’s search for the heart of the American dream.

As a final farewell to the great gonzo journalist, Depp fulfilled some of Hunter’s final wishes. After taking his own life in 2005, stating he had lived 17 years longer than he had ever wanted or anticipated, Depp chose to memorialize the master with a ceremony that included launching Thompson’s ashes out of a 153-foot Freak Power inspired cannon while “Hey Mr. Tambourine Man” by Bob Dylan blasted through speakers. The funeral was a swanky send off in true Thompson fashion, a celebration that cost Depp a reported $3 million.

The event was attended by several cultural icons including: Sean Penn, Bill Murray, Jack Nicholson, Senators John Kerry and George McGovern, Lyle Lovett and the Nitty Gritty Dirt Band who performed alongside a series of Tibetan drummers. The event took place August 21, 2005 and solidified both Thompson and Depp as two of the most bizarre, influential, and defining characters of the 21st century.