Home » Lifestyle » Girl chewed over 15,000 pieces of gum to sustain her appetite 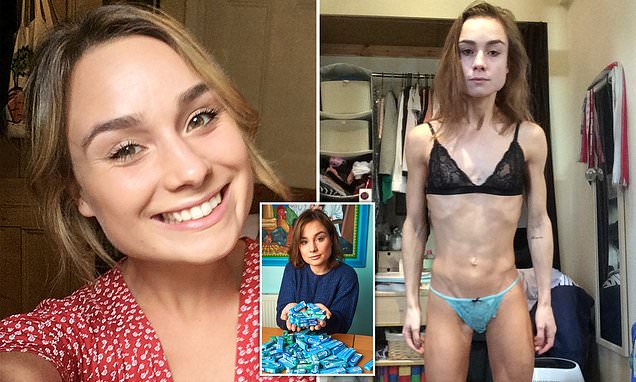 Girl chewed over 15,000 pieces of gum to sustain her appetite

Recovering anorexic, 22, chewed THOUSANDS of pieces of gum to suppress her appetite as her weight dropped to five stone – making her jaw swell to twice its normal size

A trainee dancer has revealed she’s been left with an oversized jaw after chewing over 15,000 pieces of gum to sustain her appetite while battling anorexia.

Megan Brewer, 22, from Southwark, London, weighed just over five stone at the height of her eating disorder and was constantly chewing gum to avoid eating food.

But her dangerous habit – which saw her chew up to 15 pieces per day – left her jaw in agony as it swelled to twice its normal size.

She was eventually admitted to an anorexia day clinic in February this year to begin her recovery, and she now ‘can’t stand the sight’ of chewing gum. 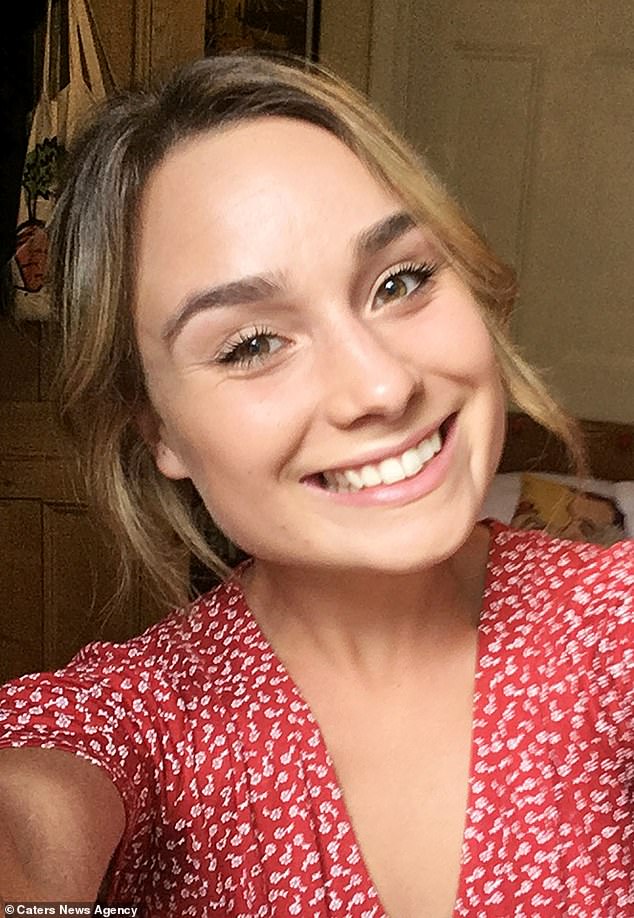 Megan Brewer, 22, from London chewed thousands of pieces of gum while she was battling anorexia in a bid to suppress her appetite and says the habit has left her with an over pronounced jaw 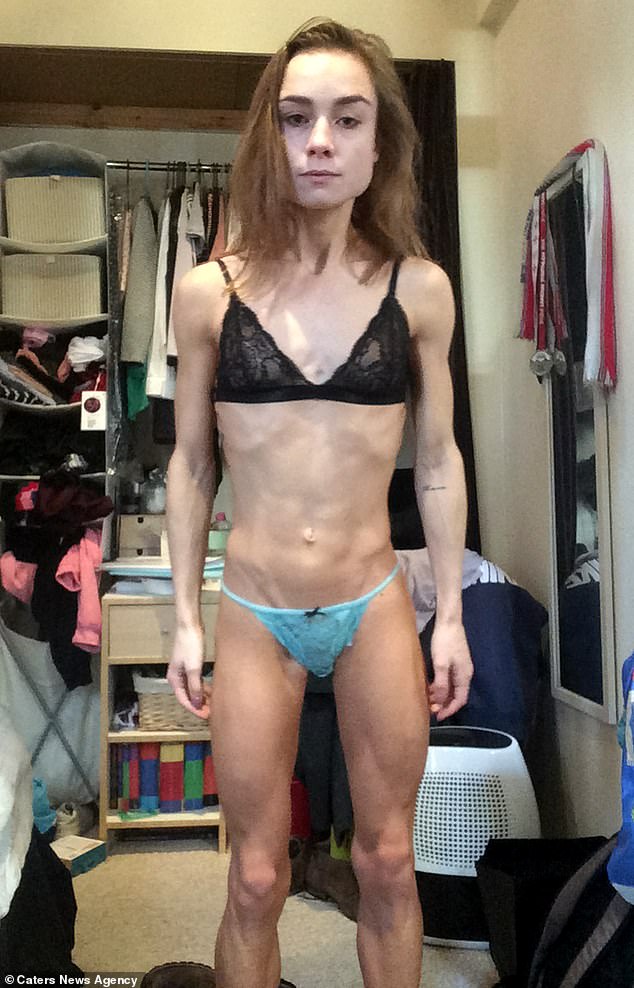 The former dancer, pictured at the height of her anorexia battle, plummeted to just five stone as she stopped eating so that she could lose weight after comparing herself to her classmates and fitness models

Megan, who is no longer attending her dancing course, said: ‘I used to chew constantly as a way of suppressing appetite.

‘It also gave me a reason not to eat as chewing gum was in my mouth which stopped me from wanting food.

‘But it gave me tummy ache as my stomach was essentially eating itself.

‘It made my jaw really sore and my muscles overdeveloped, which was exaggerated by my low weight.

‘I would always be chewing and felt anxious if I’d leave the house without any.’ 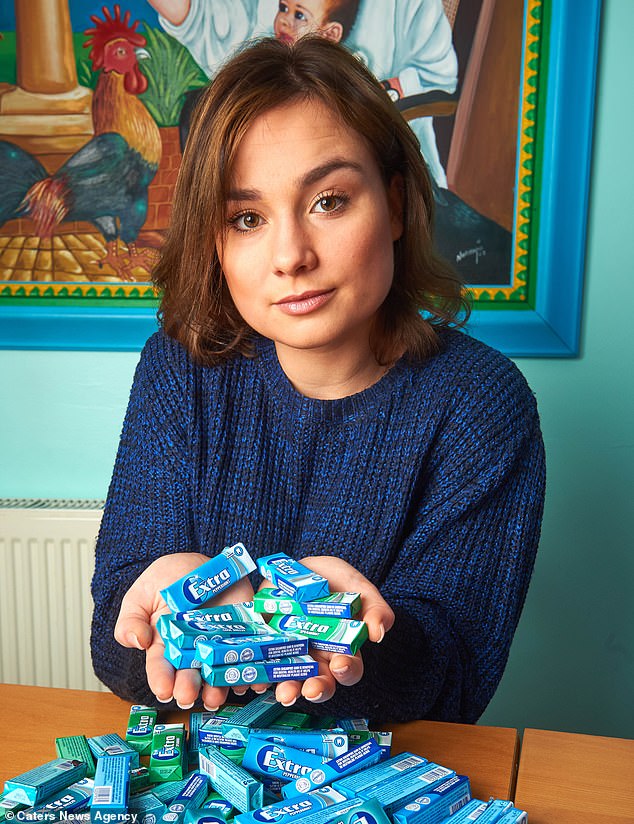 Megan was chewing so much gum that it was giving her stomachache, but she quit the habit in February this year and now says she can’t stand the sight of it

She explained that her eating disorder felt like a ‘crazy blur’, after she got into the habit of skipping meals.

‘After three years battling anorexia, I’m so thankful that I’ve finally on the road to recovery,’ she explained.

‘Healthy weight is no indication of recovery though, which I feel is overlooked by those who don’t understand.

‘I no longer chew gum though, I can’t stand the sight of it.’

Megan joined dance school at 18 in 2015, but by her third year, she would work out for up to 10 hours a day by going to the gym at least once a day, doing two yoga classes, a HIIT class, running once a week and training for a marathon, all on top of dancing. 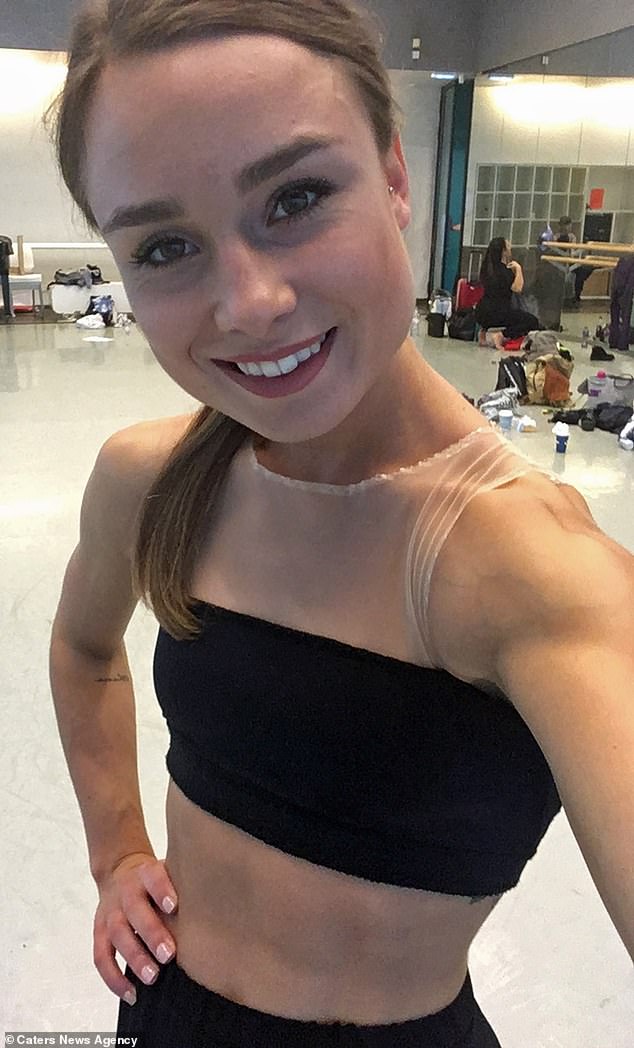 Attending the dance course, Megan said she felt a pressure to lose weight and claimed that her teachers didn’t discourage their students from doing so

Despite being a healthy eight stone, she became obsessed with her weight while at dance school and began comparing herself to other classmates and fitness models.

‘I’d become terrified of food, and to give me energy, I was having on average nine cups of coffee per day.

‘For breakfast, I’d have an egg white. At lunch I had only lettuce and a hard-boiled egg.

‘Dinner would just be an omelette or white fish and veg. I was constantly hungry.’

Megan said she was relying on chewing gum distract herself from eating.

By September 2017, her anorexia had taken a dangerous turn and her weight spiralled downwards. 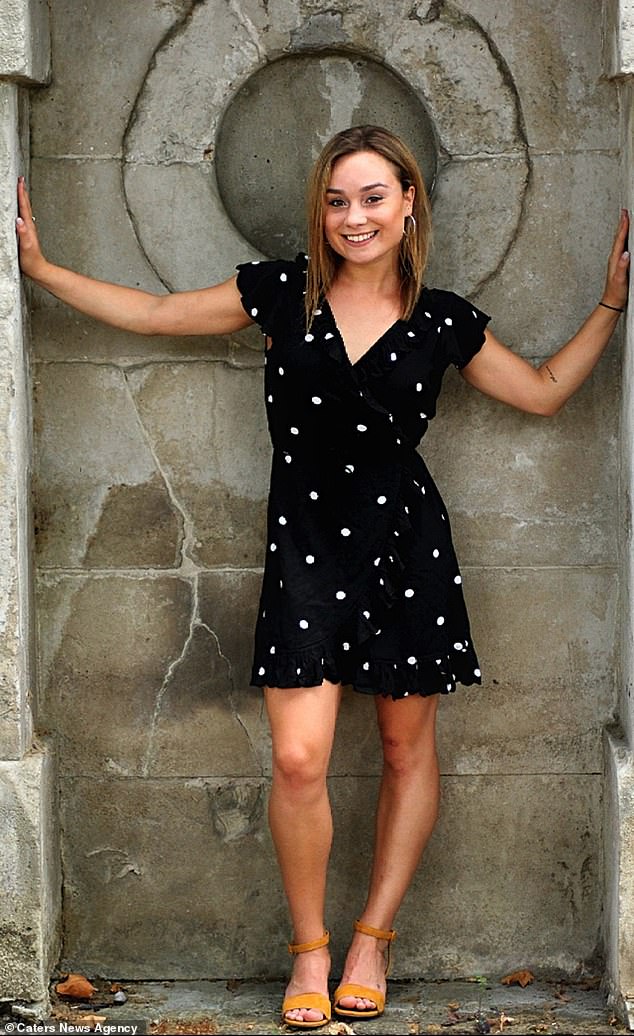 The effects of her chewing had taken its toll as Megan’s jaw became increasingly painful, while her weight loss caused her to be admitted to anorexia day care.

The result of Megan’s extreme illness also meant she was unable to maintain muscle and began to fall over constantly.

She said: ‘By my second year, I developed anxiety and third year was when I engaged in eating disorder behaviours. But no-one took it seriously.

‘Teachers seemed to actively encourage weight loss, but I just dismissed it as the dance world.

She added: ‘I began skipping meals and doing extra exercise and quickly my weight plummeted.

‘My parents didn’t notice at first as I was away from home but when I came home they were shocked.

‘The bones in my chest were exposed and I was noticeably weak. At my worst, my heart was having palpations. 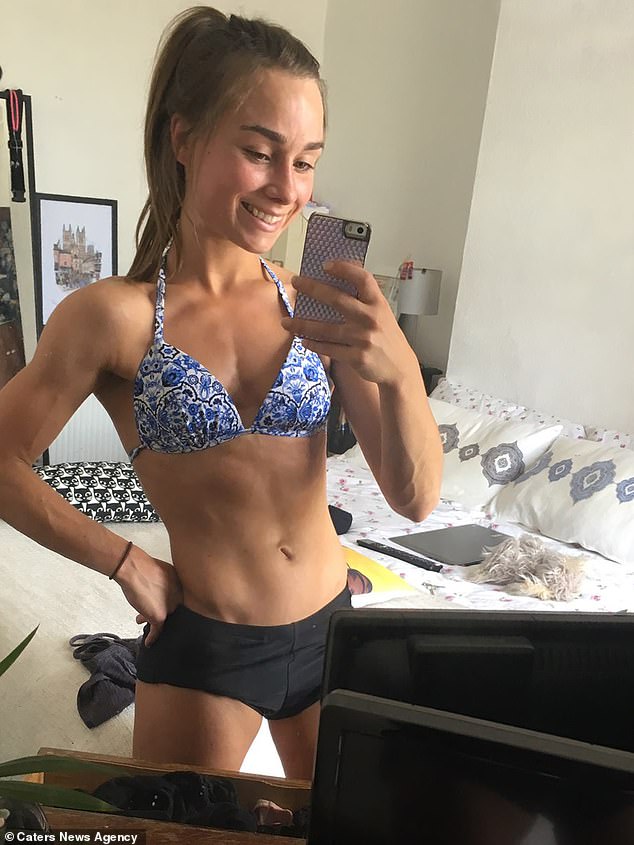 The student pictured during her recovery admits that she still has ‘voices in her head’, but said that she’s able to take a step back and ignore them now 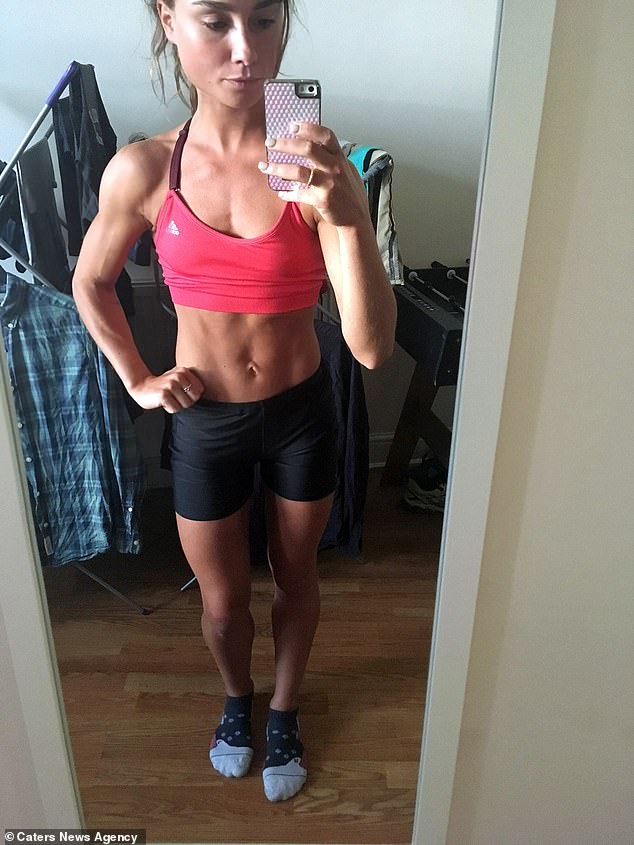 Megan, pictured during her recovery, became obsessed with her weight while at dance school and began comparing herself to other classmates and fitness models 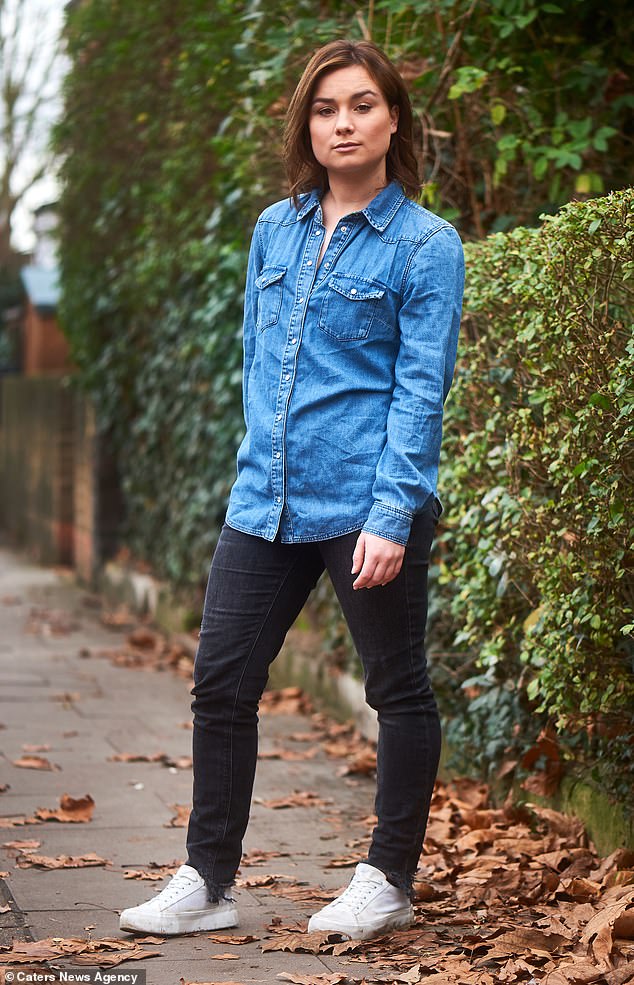 Megan, pictured now, is working on her recovery, but at the height of her illness she was unable to maintain muscle and began to fall over constantly

Megan only realised how badly she needed to change earlier in February this year when she was admitted to an anorexia day clinic.

Thankfully Megan has since been doing much better in her battle with anorexia and ditched her chewing gum habit in February.

She is currently still living in London but has now chosen not to pursue her dance career after her ordeal, instead helping others battling the disorder.

Megan said: ‘Everyone around me wanted to recover. I needed to listen to my body, not my head.

‘A friend reached out, encouraged me to go to the GP. 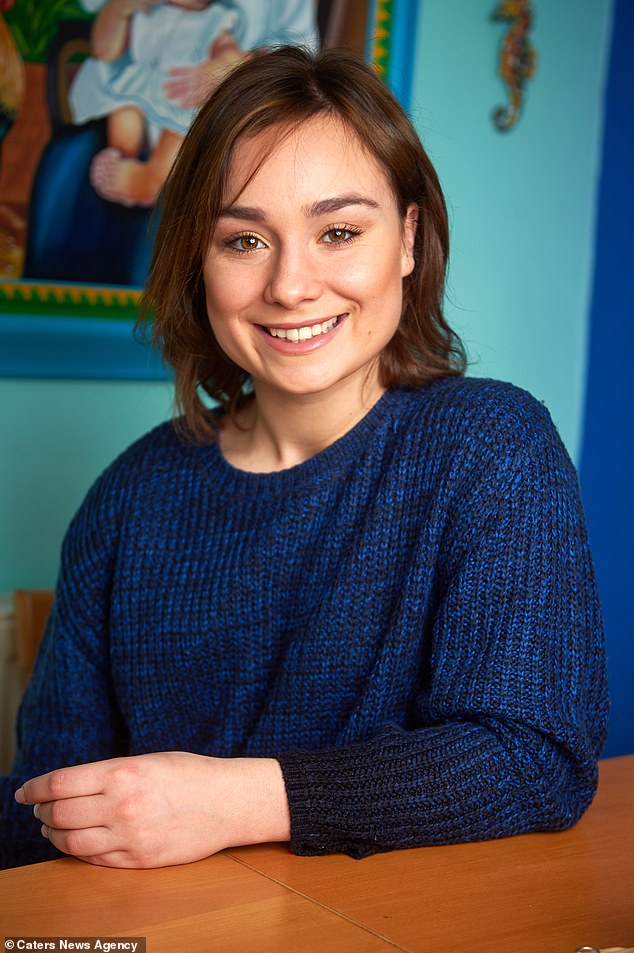 Megan is currently still living in London but has now chosen not to pursue her dance career after her ordeal, instead helping others battling the disorder

‘At the start, I was incredibly angry, but my friends and family held hope when I didn’t.

‘I had no trust in myself so I had to put my trust in the staff at the day care. The disease is evil.

‘I’ll always struggle but I’m beginning to understand it wasn’t my fault.

‘I still have all the voices in my head, but I’m able to take a step back from it now.’

If you have been affected by this article please contact eating disorder helpline BEAT Helpline: 0808 801 0677 or email [email protected]

Sophia Bush Alludes to Being Assaulted on Set of 'Chicago P.D.' While Spilling on 'Barrage of Abusive Behavior'

‘I want my daughter out’: Urgent search continues for 3 missing in abandoned mine
World News