Home » Lifestyle » Get to Know H.E.R., the New Star With 5 Grammy Nominations 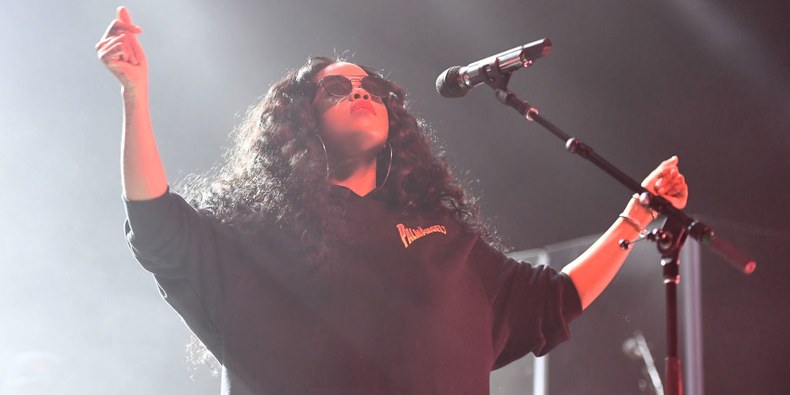 Get to Know H.E.R., the New Star With 5 Grammy Nominations

The identity of the woman behind H.E.R. was a well-kept secret until late 2016. Gabi Wilson, who revealed she was behind the mysterious moniker (it stands for "Having Everything Revealed") tends to keep on a signature pair of sunglasses, which she wears at night or indoors. The sunglasses are most likely a tactic to keep whatever is left of her off-stage identity to herself. And she's probably going to need them even more next year because the 21-year-old R&B crooner is going to be a major player to watch out for in 2019.

Wilson grew up in the Bay Area and quickly found her place in the music industry after she was signed to RCA Records in 2016. Often collaborating with other soulful acts such as Bryson Tiller and Ella Mai, after releasing five EPs and one debut album, it was announced on Friday morning that she was nominated for five Grammy Awards in the categories of Best New Artist, Album of the Year, Best R&B Performance, Best R&B Song, and Best R&B Album. That's a big step for a newcomer like H.E.R., but 2018 has already been a banner year for the R&B singer. Not only was she nominated for two BET Awards, but she was also up for six Soul Train Music Awards (and took home two). Wilson was speechless to hear about her five Grammy noms, or at least that appeared to be the case on Twitter.

If the Janet Jackson, Lauryn Hill, Erykah Badu, and Alicia Keys co-signs aren't enough to convince you that Wilson is a slept-on artist who is changing the game, then her NPR Tiny Desk cameo might be what does the trick. Earlier this year she joined the underrated sad song crooner Daniel Caesar for the Tiny Desk series to perform their duet titled "Best Part," and essentially stole the whole show.

Not only does Wilson have a smooth, Prince-inspired voice also completely shreds on the guitar and the bass, which she often incorporates into her live performances, especially for her single "Focus," which was nominated for the Best R&B Song Grammy.

Just a few days until the I used to Know Her Tour. Can’t wait to see youuuuu #IUTKHTOUR

The musician also has a deep love for snakes, and can be seen hanging out with serpents on her Instagram when she's not on stage.

Thank you @jayprehistoricpets for a crazy day!!!

The artist has spoken of her motive to create music, and plans to release a mini documentary series about her journey to the Grammy Awards. "I do this because I know I'm meant for something greater, I know I have a purpose and I'm trying to fulfill that," she says in the teaser for the series. "I'm meant for something so much bigger. I have goals, I have ambitions, I have dreams that I'm trying to make come true." If her Grammy nominations and upcoming tour with Childish Gambino are any indication, she's already well on her way.

Mother of ‘waterboarding bully’ of refugee quizzed over second attack