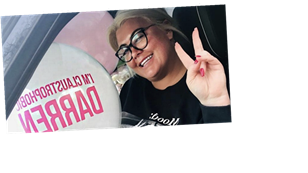 Gemma Collins has a special place in the heart of the nation, thanks to her glorious no-filter tirades and what she calls “mem-ays”.

Now to cheer us all up in times of the coronavirus crisis and lockdown, Gemma has teamed up with online fashion site In the Style to launch a new collection with some of her famous sayings turned into memes.

The 39 year old star has been working with the Manchester based brand to design a collection of unisex t-shirts, sweaters and hoodies based on her most famous slogans and memes, such as ‘You Aint Ever Gonna Get This Candy’ and ‘I’m Claustrophobic Darren!’

Announcing the launch on Instagram on Tuesday, Gemma said: “Taking ISOLATION to a WHOLE NEW LEVEL…

“We couldn’t do a launch party or a gathering obvs. BUT …. I hope you love the collection as much as me. Self isolate with The GC MEME collection!! That’s right I’ve convinced @inthestyle and @fr15by to let me bring some fun and laughter to us all at a time of need GC STYLE!!”

The reality star added that 10 per cent of the proceeds from the collection will also be donated to charity AGE UK.

The In The Style x Gemma Collins meme collection prices start from £15 and is available in sizes 4-26 to buy now.

During her time in the Celebrity Big Brother house Gemma drew attention for her infamous lines including one of her complaining about being claustrophobic to fellow housemate Darren Day.

When Gemma appeared on Dancing On Ice back at the beginning of 2019, she made headlines for her dramatic fall which she’s turned into her own meme.

Another iconic image from the CBB house back in 2017 during a moment in the back garden where she put up a peace sign, the reality star has turned that into a meme with the caption ‘Mood’.

As a special gift for celebrating her birthday in the CBB house, Gemma was gifted Tony the Pony. She was allowed 15 minutes with the Shetland which she trotted around the back garden.

One of Gemma’s favourite saying is "boring" and this one refers to her moment on Dancing On Ice when she was being criticised by the judges after her performance and gave her own sassy retort.

The GC loves to play up to her trademark diva behaviour and even had her own reality show called Diva Forever. This meme speaks for itself, Gemma wearing a crown.

Another iconic moment from the Celebrity Big Brother house with her simple request to just be quiet and have a bit of respect.

Gemma isn’t afraid of being herself and often posts gorgeous swimsuit selfies on her Instagram, this is a great throwback and her caption reads "I just wanna be me".

The GC has had some pretty famous moments throughout her time in reality TV and they’re often very relatable. But which GC are you?

This is really Gemma Collins in all her Queen Meme glory, you can wear her face printed on your hoodie.