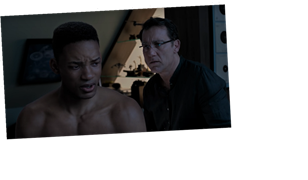 Using technology to de-age actors is all the rage in film right now, from turning back the clock on Robert De Niro in Martin Scorsese’s The Irishman to creating a young Nick Fury for Captain Marvel. But one upcoming release only seems like it gets in on the de-aging action in the same way as those other films. In Gemini Man (out Oct. 11), Will Smith plays two characters: Henry, who is the actor’s actual age of 51, and Junior, a clone who is nearly 30 years younger. But while Smith technically acted for both roles, the Gemini Man character Junior was created using CGI entirely.

"Aging is much [more] complicated. It’s life. In respect for that, we have to recreate a young Will Smith … I think for that, we should start from scratch," director Ang Lee explains about the choice to make a completely CGI character at a roundtable in New York City on Sept. 18. He adds with a laugh, "I think he’s still attractive, don’t get me wrong."

There’s a big difference between using visual effects to de-age someone and creating a totally CGI character. With de-aging, an actor actually films the action and then their face is edited. For example, in Ant-Man, Michael Douglas’ face was digitally combined with that of a younger stand-in actor in order to feature a younger version of his character in the film.

With a CGI character, the entire person — or, more often, animal or otherworldly creature — is created digitally. In the case of Smith and Gemini Man, after filming his part as Henry, the actor performed Junior’s action on a motion capture stage while wearing a special bodysuit and facial camera, according to io9’s report from a press visit to Paramount. Then, Junior’s entire self (or, young Will Smith’s entire appearance) was digitally created with only Smith’s actions being used; not his actual face or body. Smith acted opposite an actor who stood in for either Henry or Junior, depending on which part he was shooting.

It’s been considered basically impossible to create a human for a film in this method that real human viewers won’t be able to recognize as a fake. (So far, many reviewers are impressed with the visuals, but found that there was still something… off.) Still, Lee wasn’t interested in purely de-aging Smith and was convinced all CGI was the way to go for this film, in which the two characters have to constantly interact with each other.

"When you do that [de-aging], you take away all the details," Lee says at the NYC event. "Young people have more details [in their face] than old."

Gemini Man is shot with at a high frame rate, in 3D, and in 4K resolution, which is a combination Lee used in the past (to poorly received results) with Billy Lynn’s Long Halftime Walk in 2016. "You see through people, like light," the filmmaker says of his preference for shooting in this style. "You can detect how people feel, whether they’re lying to you, whether they’re bullsh*tting you or being genuine, body tension, you can detect it. You can see the thoughts in the eyes."

Lee describes seeing both Junior and Henry facing the camera "a very uncanny feeling," but recognizes that he — and pretty much everyone else in the world besides a few actors — will never really know how it feels to see a younger version of yourself in action. "I know I don’t want to see the young version [of me]," he jokes.

The three-time Academy Award winner explains that Smith’s public persona and decades of fame was a "double-edged sword" when it came to Gemini Man. On one hand, there was ample footage of 23-year-old Will Smith to refer to, on the other, everyone knows what 23-year-old Will Smith looks like. "Because we remember him, we have to play to people’s memory, as well," Lee says.

While some critics of Lee’s choices, particularly in this movie, might think that using too much advanced technology can take away from other aspects of a film, Lee disagrees. "People think 3D is high tech and anything high tech is the opposite of art and soul, and I don’t buy that," he says. "I think because I want to study those faces, I have to deliver action and spectacle. I’m delighted to do it, but … there’s nothing like studying human faces."

Pennsylvania Woman, 32, Writes Her Own Obituary & Tells Others to Do What's 'Important to You'