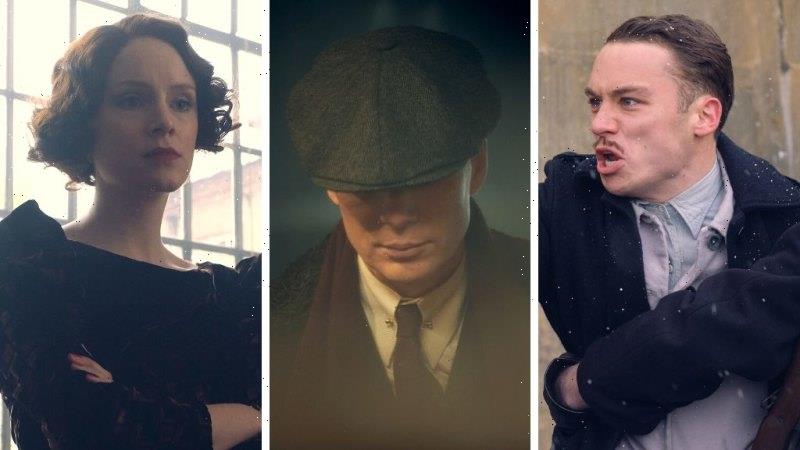 Peaky Blinders returns in fairly bonkers style for its handsome, cinematic fever dream of a final season. Birmingham gangster Tommy Shelby (Cillian Murphy) has come right up in the world. He’s now Thomas Shelby OBE, MP, and he hobnobs with everyone from Winston Churchill to Oswald Mosley, founder of the British Union of Fascists, and a female IRA commander who dresses just like Michelle of the Resistance from ’Allo ’Allo.

And yet, our Tommy is still very much the street brawler who’ll happily lay a man’s face open with a knife. 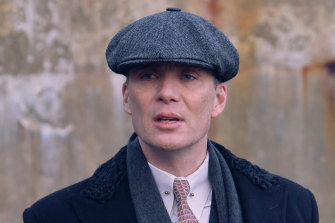 The most surreal action in Peaky Blinders takes place inside Tommy’s (Cillian Murphy) head, whether it be flashbacks to the First World War or losing his mind over the idea that his daughter is cursed.Credit:Netflix

The first order of business, though, is a tribute to series star Helen McCrory, who died last year. The Murphy family being descended from Romani Travellers, McCrory’s character, Polly, gets a fitting send-off, being cremated in a traditional horse-drawn caravan.

It’s there that the big conflict is set up: Polly’s son, Michael (Finn Cole), swears vengeance against Tommy. Yet before you know it Tommy and Michael are on the verge of going into business together, smuggling opium into the United States.

Nelson, we see, is a thoroughgoing fascist and a confidant of US President Franklin Roosevelt. As well as wanting to get involved with Tommy’s opium business, he wants Tommy to introduce him to Mosley (Sam Claflin) and that seemingly fascist-friendly IRA lady (Charlene McKenna). Tommy, you will remember, is supposed to be secretly reporting all this to Churchill. 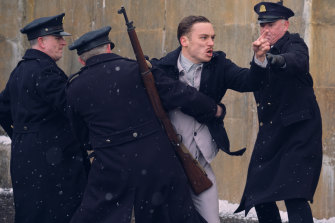 The scene in which Nelson establishes his gangster bona fides is a ripper, and series creator Steven Knight also gets great value out of Mosley’s repulsive mistress, Diana Mitford (Amber Anderson), who somehow succeeds in becoming even more vile every time she opens her mouth.

The dialogue is, of course, one of the more heightened elements of Peaky Blinders. No character ever exits a scene kicking himself for not saying that clever thing he thought up too late. Everybody gets plenty of little set-pieces in which to flourish theatrically.

The most surreal action, though, takes place in Tommy’s head, whether it be flashbacks to the First World War or him really losing his mind over the idea that his daughter has been cursed by a fellow Gypsy.

Throw in some stunning locations and production design, and it’s a wild but fitting finale that will give fans a rollicking, bloody ride to the end. 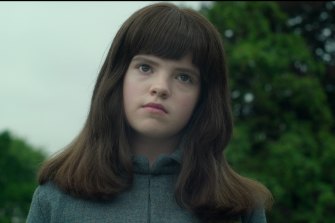 One of the many seriously creepy kids in the latest version of John Wyndham’s 1957 novel The Midwich Cuckoos.Credit:Stan

John Wyndham’s 1957 novel The Midwich Cuckoos was twice adapted as films titled The Village of the Damned. So, you know what we’re talking about here: creepy kids. Seriously creepy kids. Real little hellspawn sharing the one hivemind and giving their terrified parents demonic death stares and occasionally forcing one to, say, burn her own hand in a pot of boiling water.

The fun begins in the cosy little town of Midwich, where the lights go out one night and all the women of childbearing age wake up pregnant the next day. The women as a whole take this with a good deal more equanimity than you might expect – especially troubled young Cassie (Synnove Karlsen), whose own mum, family therapist Susannah (Keeley Hawes), doesn’t think she’s ready for motherhood.

The government seems to know exactly what’s going on, and everyone immediately has to sign their lives away under the Official Secrets Act. Series creator David Farr (The Night Manager) and his roster of directors do the creepy stuff well, although seven episodes does feel a bit long for the story.

The Summer I Turned Pretty
Prime Video, from Friday 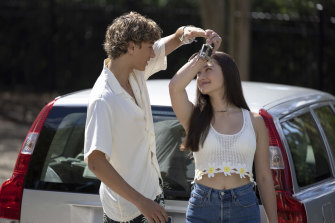 Lola Tung in the coming-of-age drama The Summer I Turned Pretty.Credit:Amazon Prime

It’s a coming-of-age story for the nearly-16-year-old Belly (appealing newcomer Lola Tung), whose novelist mum (Jackie Chung) isn’t rich but takes her for long, lazy summers at the beach house of wealthy friend Susannah (Rachel Blanchard). This year, though, hormones are making Belly and Susannah’s teenage boys see each other quite differently. Based on a novel by Jenny Han, it’s well written and distinctly tender in places, with the extra dimension of also being a coming-of-new-age story for the mums. Nice. 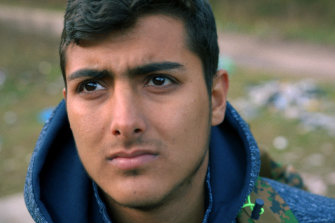 iWonder’s new crop of documentaries to coincide with World Refugee Day on June 30 includes this harrowing film following numerous teenage child refugees risking their lives to cross European borders. Fifteen-year-old SK – who arrived in Greece having walked 5000 kilometres from Afghanistan – is among those who face a further 1200 kilometre trek through Eastern Europe, braving trackless frozen forests, brutally violent border guards and even minefields in the search for safety. Illuminating, compassionate and important.

Britain’s follies are more than mere architectural whims that rich eccentrics built on their estates in centuries past. Series presenter Rory Fraser, a suitably idiosyncratic expert on follies, explains that they were catalysts for architectural innovation and focal points of literature, landscape and art that remain portals to history. The short-but-fascinating episodes include a look at a defiantly Roman Catholic folly built in fervently anti-Catholic Elizabethan times, and the tower that inspired Saruman’s tower in The Lord of the Rings. 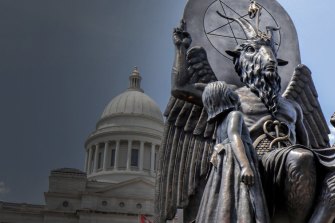 A scene from the illuminating documentary Hail Satan?.Credit:Stan

The Satanic Temple is an organisation formed in 2013 to promote the separation of church and state in the US – typically by making legal demands for “satanic” monuments to be placed alongside Christian ones already erected on grounds of courthouses and government buildings across the country. This has made the temple widely hated, but at the same time it has become a kind of family for the culturally disaffected. This engrossing documentary illuminates numerous facets of an outre circus with a serious purpose.

* Stan is owned by Nine, the owner of this masthead.