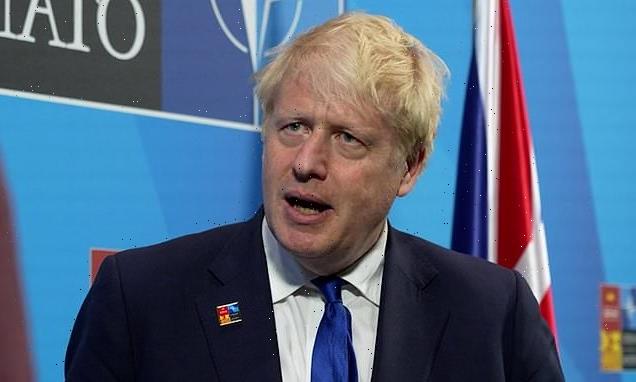 From Ukraine to Taiwan, we have to face up to the high price we must pay to defend our values, writes General Sir RICHARD SHIRREFF

Boris Johnson is a politician who prides himself on having his cake and eating it. But when it comes to matters of national security, that’s more of a challenge than usual.

At the Nato summit in Madrid this week, the Prime Minister urged fellow leaders to ‘dig deep’ to increase their defence budgets beyond two per cent of national income, the current minimum requirement for member states.

It is an admirable and necessary goal.

Yesterday it was confirmed that Britain is to give another £1 billion in weapons and training support for Ukraine and boost defence of Nato’s Eastern flank.

So how does such leadership, ambition and commitment sit with the stark fact that our own military is being starved of essential funding?

The Prime Minister has admitted to abandoning the commitment made at the last election to increase the UK defence budget faster than inflation, to the understandable despair of Defence Secretary Ben Wallace.

Given the rising price of everything from the fuel in our tanks to our soldiers’ combat fatigues, this means a real term squeeze on funding, falling far short of the sums promised even before the invasion of Ukraine.

Yet rarely have our Armed Forces been more in need of a substantial injection of money, and not just now, but for years to come. 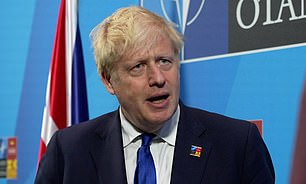 There are two realistic outcomes of Vladimir Putin’s war in Ukraine.

Either — as we hope — Ukraine’s President Zelensky achieves his laudable goal of pushing Russian forces out of his country. Or, Putin will annexe territories in Ukraine’s south and east, with Kyiv acquiescing under pressure from the West.

Either way, it will not be the end of the story. Russia, a nuclear power, will regroup, rearm and reignite its lust for expanding what it perceives as its rightful empire.

If unchecked, Putin will soon subjugate the rump of Ukraine, swallow Belarus into the motherland and force a land bridge through the Suwalki Gap, the border territory between Poland and Lithuania that separates the Russian exclave of Kaliningrad from Belarus.

That, of course, would be an aggressive incursion into territory of Nato member states, which would trigger World War III. A hot war of this kind would credibly involve nuclear weapons.

Russian forces have gamed this scenario in regular exercises for more than a decade, practising the partial or whole seizure of the Baltic states, and what might follow.

They call it ‘nuclear de-escalation’ — but to everyone else it’s nuclear blackmail.

Russia will threaten the West that if we try to recapture the territory that they have taken, Moscow will launch nuclear-tipped Iskander missiles from Kaliningrad against Nato targets. The Western alliance would be forced to respond in kind.

How can we avoid this Armageddon? By mounting a sharp and strong deterrence against any further Russian invasion for as long as it’s needed.

Nato is beginning to understand this. After a decades-long slumber, the military alliance is awakening to the real Putin: a man whose barbaric repertoire includes the bombing of civilians in a shopping centre, as we saw this week in the Ukrainian city of Kremenchuk, more than 100 miles from the frontline in the east. 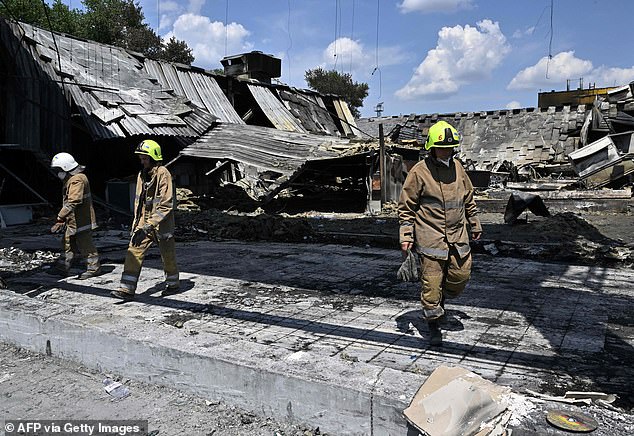 Russian bombing of civilians in a shopping centre, this week in the Ukrainian city of Kremenchuk, more than 100 miles from the frontline in the east Pictured: Rescuers walk in the destroyed Amstor mall in Kremenchuk

If he hoped that the West would flinch at such a naked atrocity, he would be sorely disappointed. If anything, the attack galvanised Western leaders at the G7 meeting on Monday in Bavaria, and then at the Nato summit.

Not before time, the military alliance has realised that there will never be lasting peace in Europe while the Russian dictator remains in power.

It now plans to increase its Rapid Response Force from 40,000 troops to 300,000 to buttress Nato’s presence on its eastern flank. With the bulk of troops on high alert and with pre-positioned equipment and regular training, it will go some way to creating a deterrent ‘band of steel’ from the Baltic to the Black Sea.

Emmanuel Macron, too, is beginning to see the light. The French president has hardened his appeasing rhetoric, urging the West not to ‘humiliate’ Russia in a future peace settlement, and now says that Russia ‘must not win’.

Germany is also undergoing a Damascene conversion, from a state with a toothless fighting force cowed by its military past, to one pledged to become Europe’s biggest defence spender. The chancellor, Olaf Scholz, announced an increase in Germany’s military budget of up to €80 billion (£69 billion) a year.

So, if other member states are willing to put their money where their mouth is, why isn’t Boris Johnson?

He will say that the UK has spent over and above our peers in Nato, with 2.3 per cent of GDP going to defence and the financial and military support of Ukraine this year.

But such investment belies the real cost of keeping our armed forces battle-ready. If inflation is taken into account, the true percentage is 2.1, a fall compared to last year. 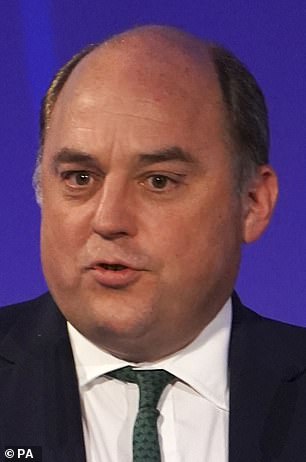 At the current rate of inflation, this year’s increase will amount to just 0.9 per cent in real terms.

Defence Secretary Ben Wallace is said to be lobbying the Treasury for an extra £10 billion a year (equal to 2.5 percent of GDP), warning that the British military has for too long had to survive on ‘a diet of smoke and mirrors’.

He’s not wrong, but even this is too little too late.

What we need now is an injection of at least another £1 billion this year to replenish our depleted stocks — having given so much weaponry to Kyiv — and a commitment to spend 5 per cent of GDP going forward.

Yes, this is a tough ask at a time of high inflation, high energy prices and the soaring cost-of-living, but we do not have a choice.

Boris Johnson has been on the front foot in arming Ukraine but he’s been noticeably silent on the ‘blood, toil, tears and sweat’ — to quote our wartime leader — we will need to meet the Russian threat head-on.

Our leaders need the moral courage to be brutally honest with the British electorate once more — and warn the public that there could be even greater threats to the international order to come.

Nato will warn that China, too, is a challenge to its members’ security.

Beijing makes no secret of its desire to bring Taiwan into its fold, by force, if necessary, setting up a confrontation with its ally the U.S., which is committed to Taiwan’s defence.

Liz Truss, the Foreign Secretary, has even suggested at a Commons committee that London should begin arming Taipei now, in contrast to the West’s slow rearmament of Kyiv after Russia’s invasion into Crimea in 2014.

The Chief of the General Staff, General Sir Patrick Sanders, has described the Russian threat as a ‘1937 moment’.

But I’m afraid we’re past that. Putin’s annexation of the Crimea eight years ago was in fact our 1938 moment — when weak-willed Western governments gifted Hitler border territory in Czechoslovakia.

Now we face the prospect of another 1939 — when World War II broke out as Britain and France stood up to the Nazi invasion of Poland.

Our Prime Minister, a biographer of Churchill, should know this better than anyone. War is an expensive business and Boris Johnson also needs to ‘dig deep’. The cost might be unimaginable if not.