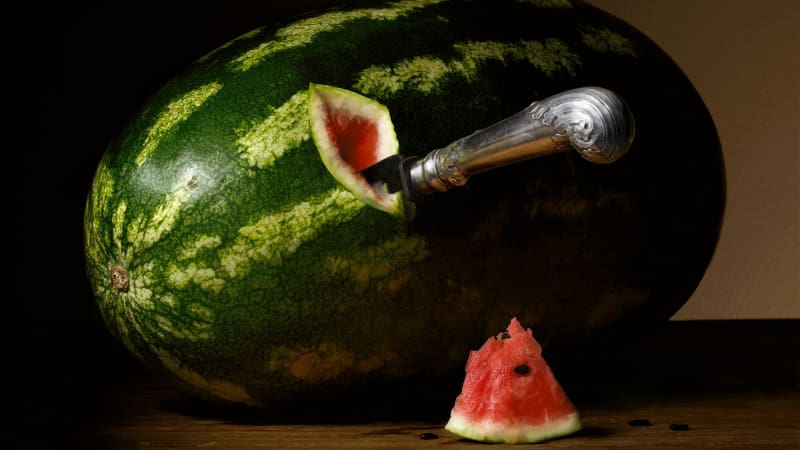 Robyn Stacey recalls the juvenile titter among visitors to the historic Vaucluse House gardens, former home of statesman and explorer William Wentworth. Known as "the father of Australian democracy", Wentworth was also father to 10 children, and at least one illegitimate child. As Stacey remembers: "A guide was telling the story about Wentworth's wife Sarah writing a letter to their daughter [Thomasine], and saying, 'Papa enjoys a good melon'. And everybody goes 'wo-ho-ho'. I thought, I should do something about that."

Stacey's still life photograph, The First Cut (2009), savours the double entendre. The buxom melon evokes both Vaucluse House's ample produce and none too subtly suggests the pleasures of its ripe juicy flesh. 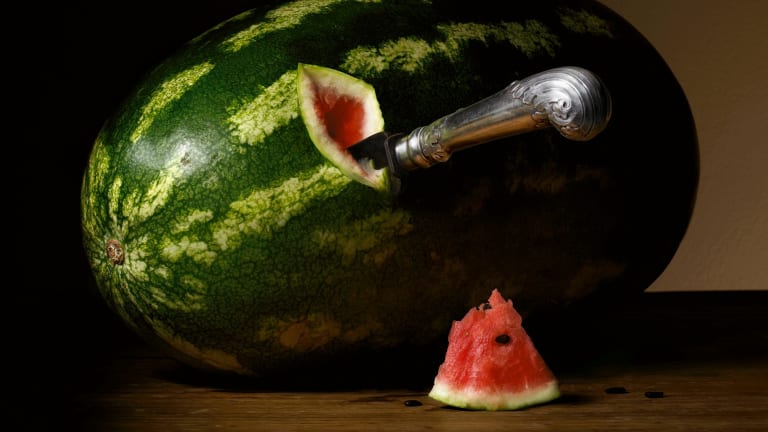 "It's a way of fleshing out these historic characters with less familiar stories," she says.

While prudish Dutch Protestants who popularised still life in the 17th century might disapprove of the ribald pun, the genre has consistently played with multiple meanings. Still life's most famous motifs – skulls and candles – remind us of our mortality. Books represent knowledge. Glass symbolises fragility, while an upturned glass is a portent of doom. Fruit signifies abundance and fertility, but its dimpled flesh represents decay. 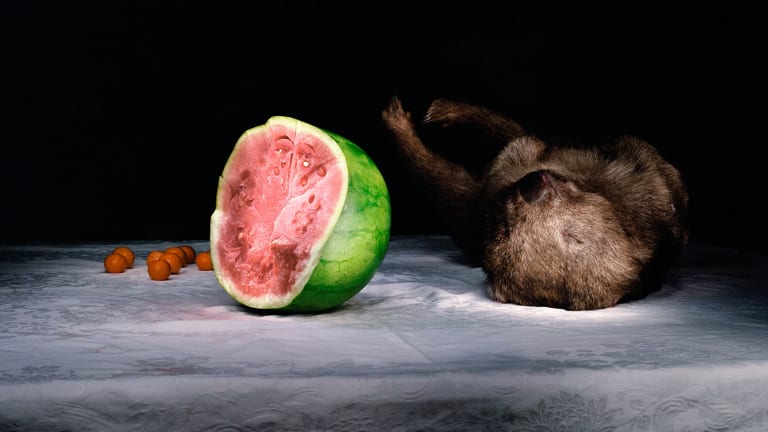 The First Cut is part of a series of still life photographs Stacey produced over a 12-year period while artist in residence with several Australian collections. Three lavish monographs accompany the images: House (2011), Museum (2007) and Herbarium (2004). The work continues Stacey's interest in staged settings. Using objects, flora and fauna from historic homes such as the Wentworths' house-museum to internationally significant scientific collections, Stacey constructs narratives of Australian colonial life. For the first time, 24 of these monumental photographs are on display in Melbourne. The two-part exhibition places Stacey's still lifes alongside works by 35 other Australian photographers.

It's easy to understand still life's appeal to photographers. 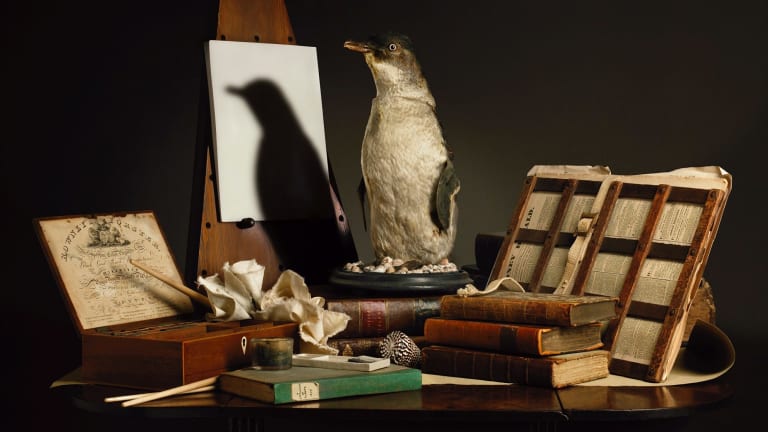 Coincidentally, photography's first still life (Nicephore Niepce's c.1827 Set Table) arrived around the time Stacey's collectors were colonising Australia. The new medium's long exposure times lent themselves to recording inanimate objects. While the technology has advanced, Stacey's still lifes take months to set up. All the elements are authentic. Objects are taken from the period. Plants are either sourced or grown. Often this means waiting nine to 12 months for produce and plants to come into season.

In Rouse and the Cumberland Plain (2010), Stacey tells the story of expansion and its consequences. The stumps on the right of the tableau represent the felling of trees on the Cumberland Plain west of Sydney about 1810. As the eye follows settlers west, eucalyptus and native grasses give way to introduced species such as oranges, grapes and decorative ferns from the Rouse estate, one of the oldest gardens in Australia. Numerous tools, such as a water pump and scythe, and a book titled Plain Instructions in Gardening for Ladies suggest changes in farming practices. 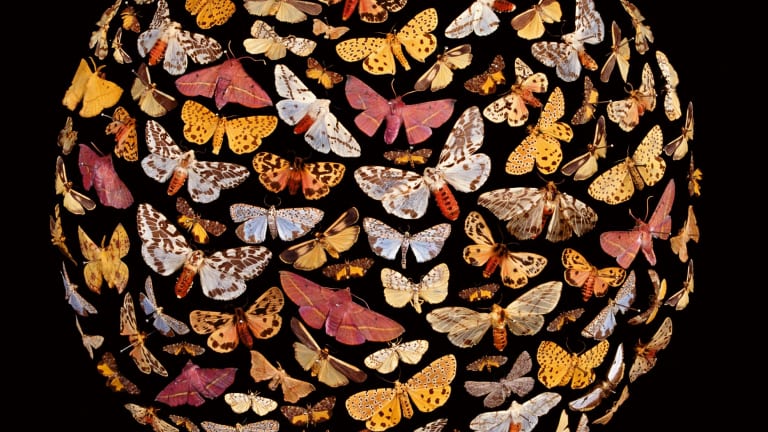 Where still lifes tend towards the domestic and intimate, Stacey's are monumental. Rouse and the Cumberland Plain, Mr Macleay's Fruit and Flora (2008), and Table of Industry (2009) are each roughly 3.5 metres wide and two metres high.

"They evoke French 19th-century wallpaper, which brought exotic and historical scenes, such as African landscapes or everyday life in ancient Greece into French homes," Stacey says. "Their scale allows the viewer to literally walk into the image and experience the objects in the composition at life size or larger. This idea of making the long ago present today, appealed to me." 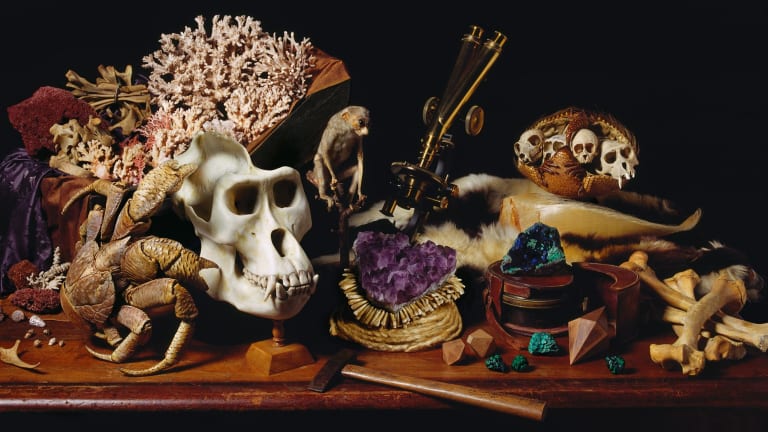 In the era of post-Enlightenment rationalism and imperial expansion, "a gentleman required three things – a collection, a garden and a library", says Phizacklea. Stacey's photographs record the obsession of colonial collectors such as the Macleays.

"The Macleay family believed they could collect one of everything in the world," Stacey says. "The museum houses a collection that spans all continents and most countries." 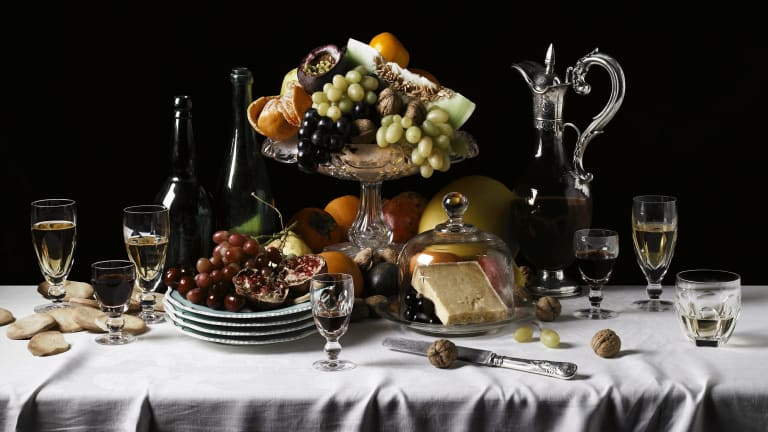 This ambitious yet impossible task nevertheless produced the oldest and historically most important insect collection in Australia, containing 10,000 specimens. 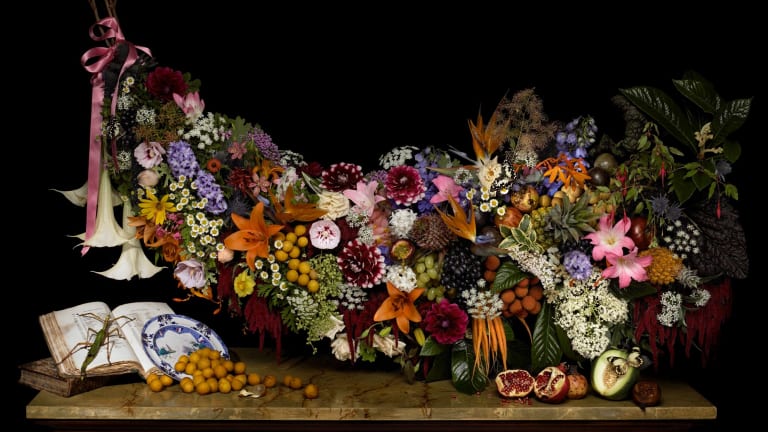 "Collections, particularly public collections, tell us who we are, where we came from and what we valued," Stacey says. "Collections also tell us what we have lost. One of the most striking dichotomies when you access these collections is how many species are unique to Australia and at the same time how much has disappeared in the country's brief history since [Governor Arthur] Phillip's arrival in 1788."

Marian Drew makes no bones about our impact on the land. Confronting yet exquisite, her table is set with road kill. A wombat lies belly up and prostrate next to a broken melon. Further proof of still life's metaphoric malleability, Drew's melon offers a counterpoint to Stacey's The First Cut. It represents life and death rather than sex and fecundity. Yet, as Drew's Wombat and Watermelon (2005), with its no-fuss title and uncluttered table suggests, she has little patience for still life's elaborate codes.

"There's a danger that the message will be lost," Drew says. "You have to read the didactic. That's why I reduced it. I didn't use the exuberance of plenty. I want to isolate and give presence to individual creatures and lives."

Despite the genre's paradoxical title, these vivid images remind us that life still carries on – and those responsible for the scene within are just outside the frame.

Robyn Stacey: As Still as Life is at Monash Gallery of Art, Wheelers Hill, until March 3, 2019; mga.org.au.

18 Products That Totally Transformed Our Hair This Year
World News