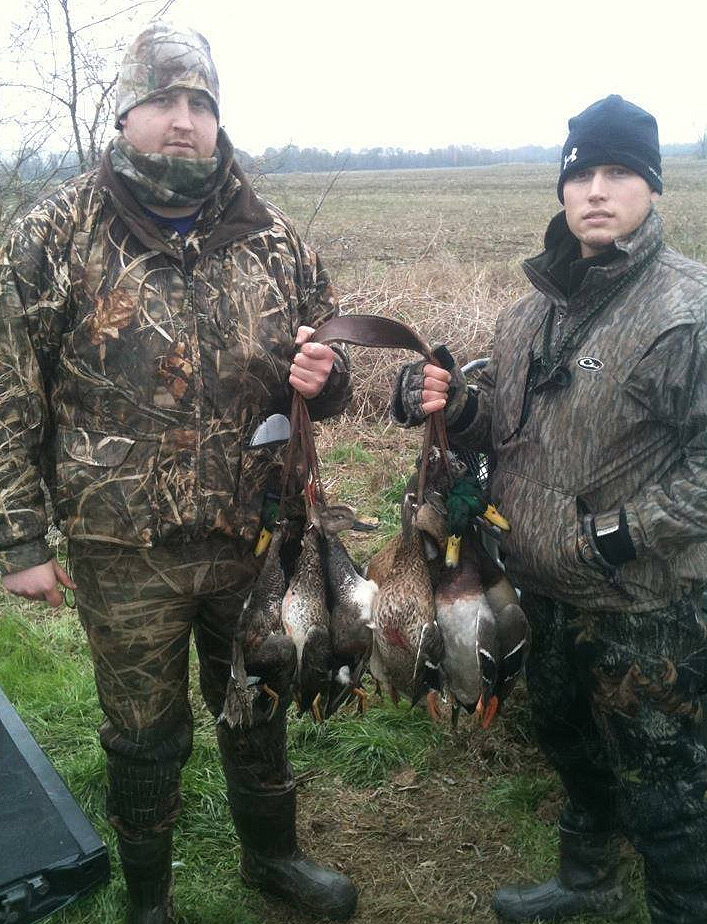 A former Louisiana State University Tigers football player is in recovery after being shot by a dog in a freak hunting accident.

Matt Branch, 29, of Louisiana is still recovering in the hospital following the Dec. 28 incident, and had to have part of his leg partially amputated as a result, his friend Micah Heckford tells PEOPLE.

Matt — who played for LSU from 2009 to 2011 — and Heckford were on a hunting trip in Eagle Lake, Mississippi, with two other men, Matt’s cousin, David Joe Branch, and their friend, David Lamont, last month.

Heckford says that on the morning in question, the group was gathered around their Polaris Ranger to load up gear. Matt had put the safety on his gun, and laid it horizontally in the vehicle’s bed. According to Heckford, Matt was standing to the side of the Ranger, attaching a duck decoy to a pole when David Joe’s black lab, Tito, jumped into the bed.

The dog stepped on the 12 gauge shotgun, simultaneously pushing off the safety and pulling the trigger. Heckford — who also shared the story in a viral Facebook post — said “the one shell left in the chamber” fired through the side of the ranger’s bed and into Matt’s left thigh, severing his femoral artery.

At the sound of the gunshot, “everybody was caught off guard and everybody looked up,” Heckford recalls. Matt, he says, screamed out and fell to the ground.

“We knew he had been shot and we needed to get him help,” Heckford continues. “We put him in the passenger seat, and I jumped over in the bed and called 911.”

Heckford tells PEOPLE the group drove Matt to the highway while elevating his leg. EMTs arrived and rushed Matt — whose story was also covered by the Clarion Ledger — to the University of Mississippi Medical Center, where he’s undergone several critical surgeries since.

“They had a shunt holding his femoral artery together, so they had surgeries to put that in and take it out,” Heckford explains. “They also amputated his leg right above the knee.”

Heckford adds that as of Wednesday, Matt has another surgery scheduled “to make sure that everything is in his leg the way the doctors wanted it.”

Matt will likely have to stay in the hospital in Jackson, Mississippi, for two months in total, Heckford says.

RELATED: WATCH: 5-Year-Old Boy with Cancer Is All Smiles While Dancing to Michael Jackson Songs

“Yesterday, they removed the ventilator and he woke up,” he shares, adding that “all of [Matt’s] MRIs and CT scans came back positive. It’s a great outcome, no brain damage.”

Heckford says the Branch family has reported that the former athlete seems to be in “good spirits.”

“[When he woke up], he asked them to get him some candy or something,” Heckford tells PEOPLE, laughing. He adds, “I don’t think he’s awake enough to know the severity of the situation.”

To support Matt’s recovery efforts, his family and friends have set up a GoFundMe page and organized a blood drive on Saturday in Bastrop, Louisiana.

What happened to the married father of one sheds light on the importance of hunting safety, Heckford says.

“A big problem that we have as hunters is taking the time to stop to think, ‘What are we about to do? What could go wrong? What I could do to prevent that from happening?’ ” he explains. “We call them ‘freak accidents,’ but the chances are still there. It can and does happen.”

“A minute before, we were in a perfect world, laughing, joking, but had we stopped and thought, ‘Hey guys, let’s make sure that the guns aren’t loaded,’ ” Heckford says.

Now more than ever, Heckford recommends fellow hunters “run through every possible outcome of a situation. That’s in my mind where the danger lies … You’re excited thinking about the logistical and technical details of the hunt, but the thing is none of that matters if something goes wrong.”

‘The Upside’ Review: A Billionaire and His Buddy Find Reasons to be Cheerful
World News