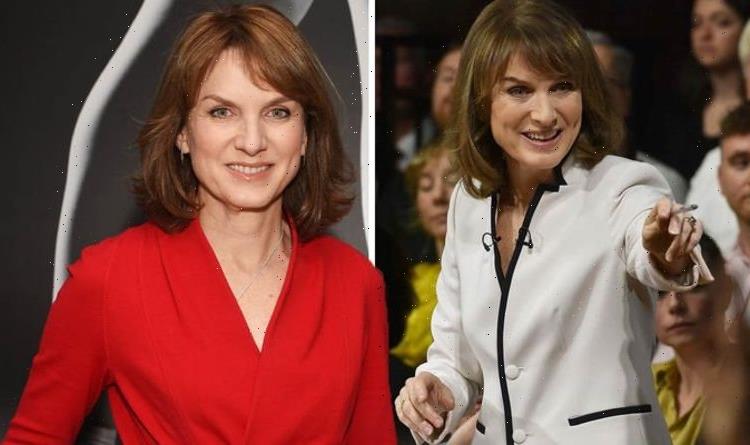 Fiona Bruce salary – how much does the Question Time presenter really earn?

Fiona Bruce has worked her way up from BBC researcher to one of the broadcaster’s most successful presenters in her 31-year career. Having hosted a range of prime time BBC shows, it is no secret the 57-year-old is on a generous salary to match her three decades of experience – but how much does Fiona Bruce really earn? What’s her annual salary?

Around the world, the BBC is held in high regard by viewers who tune in to watch everything from series dramas to political chat shows and is known to host some of the nation’s best talent.

Since climbing the ranks of the broadcasting industry, Fiona Bruce has made her mark as one of the most successful journalists in Britain.

Having previously spoken out about her hard work often taking over her family time, the Question Time presenter’s paycheck certainly reflects 31 gruelling years of dedication to the job.

For years, Fiona Bruce has held her spot as the second highest-earning female at the firm – and new figures reveal that her position remains unchanged.

How much does Fiona Bruce earn?

Compared to previous years, it is clear that the BBC One star has taken a significant pay cut, though her salary remains high.

The pay cut comes following a decision by the BBC to slash its talent wage bill by 10 percent just last year.

How has Fiona Bruce’s salary changed over time?

Since starting out as a BBC researcher, aged just 25, Fiona Bruce has quickly worked her way up the ranks.

Having conquered everything from Panorama to Crimewatch and Fake Fortune, the top presenter has seen what started out as an underpaid job reach a generous wage over the years.

She told the Evening Standard: “I was not confident talking about pay at all.

“If I got a promotion or another job, it just never occurred to me to argue about the salary.

“I knew from the get-go that there was a differential in how much people were paid but it just never crossed my mind to talk about it.”

Having worked across a plethora of hit BBC programmes, Fiona Bruce is no stranger to an evolving salary.

How does Fiona Bruce’s salary compare to her BBC colleagues?

Holding her position as the second-highest-paid female, Fiona Bruce takes the fifth spot in the BBC’s latest top 10.

The current highest-earning on-air stars are:

Earning a noticeably reduced amount compared to her male counterparts, Fiona Bruce remains a dedicated advocate for equal pay across the BBC.

In 2020, she told the Evening Standard: “The BBC has made great strides forward in that territory, especially in the last three years — there is now a representation of women that there wasn’t three or five years ago but it still has a way to go.”

'Britain's Bill Gates' Mike Lynch set for extradition to the US