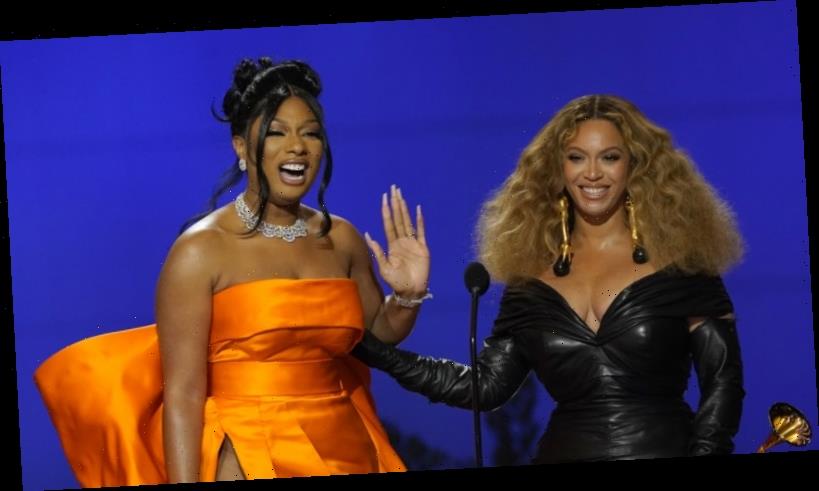 It was all going well, if a little laboured. A record-setting night for pop icon Beyonce, a useful haul for rising superstar Megan Thee Stallion, a nod towards Taylor Swift’s supreme vision. But then, a classic Grammys headscratcher for the show’s biggest award.

Even Billie Eilish appeared shocked when her single Everything I Wanted took out the night’s top prize, record of the year. 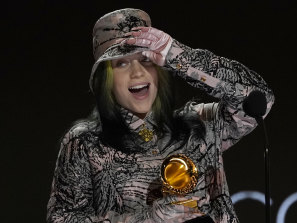 Billie Eilish reacts as she accepts the award for record of the year for Everything I Wanted at the Grammys.Credit:Invision

“This is really embarrassing for me. Seriously, can you just cheer for Megan Thee Stallion?” the 19-year-old offered in her acceptance speech, which was entirely dedicated to why her fellow nominee warranted the win. “You deserve this. You had a year that I think is un-stoppable.”

It echoed another classic clanger – in 2017, when Adele’s 25 was awarded album of the year over Beyonce’s Lemonade, and the British singer used her speech to implore the Grammys a mistake had been made.

That blunder led to soul-searching at the Recording Academy, and increased efforts to reform its voting diversity to counteract the implicit bias that led to rap and R&B artists – that is, predominantly black artists – being repeatedly marginalised in the major categories. 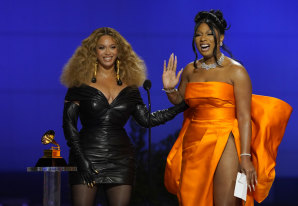 Up until then, the Grammys – long treated as an out-of-touch spectacle voted on by a mysterious cabal painfully out-of-step with the cultural zeitgeist, so much so that 2020’s most dominant artist The Weeknd had vowed to boycott the awards going forward – had more-or-less done itself proud.

In any case, Eilish’s win in the category capped its own milestone for the Grammys – the first time four separate and solo women won the top four honours, with Swift taking home album of the year, Megan Thee Stallion nabbing best new artist and H.E.R the song of the year.

It was an awkward ceremony but one with its heart in the right place, an awards show that leaned into the desire for live music after a year of COVID-mandated venue closures. Host Trevor Noah quipped the show would be “the biggest outdoor event all year, besides the storming of the Capitol”, and said “we’re hoping this is a sign for what 2021 can be.”

In reality, the endless stream of live performances bogged down any sort of enjoyable momentum. For every lively set, like Megan Thee Stallion and Cardi B’s incendiary rendition of WAP and Lil Baby’s recreation of police brutality-turned-collective action, there was a lull. BTS on a rooftop, Post Malone living his doom metal fantasies – not quite the global motivation to get back out to a live gig that was intended.

The awards were a reprieve. Beyonce took home four – best R&B performance for Black Parade, best music video for Brown Skin Girl and best rap performance and best rap song for Savage, to set a record: her 28 Grammys now outpaces the 27 held by Alison Krauss, making her the most-winning female artist ever. They also offered hope that she’d potentially claim record of the year, a major category win that’s eluded her since 2010’s Single Ladies won song of the year, but it wasn’t to be.

Other multiple winners included Fiona Apple who claimed two wins, including best alternative music album for Fetch The Bolt Cutters, an album that topped critics’ year-end lists last year and perhaps deserved a shot at album of the year. Apple avoided the awards, anyway; in a Twitter post she said “it doesn’t feel safe to me to be in that exposure, scrutiny, comparison to people.”

But it’ll be another confounding selection, a classic Grammys moment, that will mark this year’s legacy – and no doubt spark further calls to overhaul a prestigious awards show that continually offers up such befuddlement.