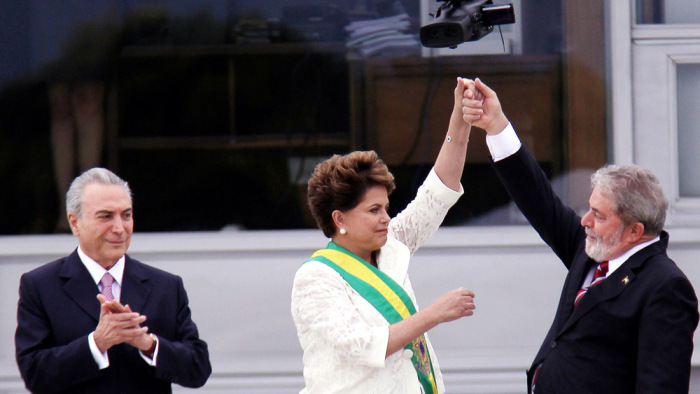 Film Review: ‘The Edge of Democracy’

How the hell did we get here? It’s a question that political liberals are asking themselves in many parts of the world, reeling as they are from a global tilt to the right that has yielded the tumultuous Trump presidency, the ceaseless, squabbling chaos of Brexit and, albeit less prominently in international headlines, Brazil’s submission to the oppressive ultra-conservatism of new president Jair Bolsonaro. The question tends to be asked rhetorically, with thrown-up hands and a plangent note of exasperation. Brazilian filmmaker Petra Costa, however, actually seeks to answer it. “The Edge of Democracy,” a sprawling, transfixing documentary essay on her country’s far-right takeover, painstakingly maps the chain of events that brought the previous government to its knees.

This urgent, unabashedly partisan account makes unhappy sense of the upheaval in Brazil — though aggrieved left-wing viewers in the U.S., the U.K. and beyond can hardly fail to see shards of their own national crisis in the shattered reflection. It’s fitting, then, that “The Edge of Democracy” — which nabbed a prominent opening-night slot at Sundance, and has since been racking up festival appointments — will be globally distributed by Netflix, ensuring the most international and immediate audience possible for a film that acts as a cautionary clarion call to the politically complacent. It’s not merely a screed, though. Those familiar with Costa’s previous work, including the intimate, unorthodox works “Elena” and “Olmo and the Seagull,” will be unsurprised to find a poetic interior dimension to this current-affairs snapshot.

The endangerment of democracy, in other words, is a matter the filmmaker takes personally — as expressed in her own running voiceover, which often takes on the wounded, wistful tone of an elegy. “Brazilian democracy and I are the same age,” she muses, “and I thought in our thirties, we’d be on solid ground.” The daughter of two radical activists who were exiled and imprisoned for opposing Brazil’s military dictatorship in 1980s, she admits Bolsonaro may prove their struggle to have been for naught: “I fear our democracy was nothing but a short-lived dream.” Ribbons of Costa’s family history are woven through the film’s close-quarters study of the Brazilian left’s two fallen leaders: former presidents Luiz Inácio Lula da Silva (popularly known as Lula), currently in prison on seemingly trumped-up charges of corruption, and Dilma Rousseff, Brazil’s first female head of state, impeached in 2016 on equally debatable grounds.

For viewers who haven’t kept up with the rough-and-tumble of recent Brazilian politics, “The Edge of Democracy” offers an unavoidably dense but enlightening recap, beginning with Lula’s highly cinematic arc. A scrappy champion of the working class who ran for president three times before finally bringing the socialist Workers’ Party to power in 2003, his rise did not come without compromise, with significant concessions made to big business along the way; that didn’t dent his approval ratings, however, which were notably high at the time he handed the baton to Rousseff in 2010. A former Marxist guerilla fighter whose stance had shifted toward pragmatic capitalism by the time she got into politics — “If Jesus came to Brazil, he would have to make an alliance even with Judas,” she says drily — Rousseff seemed an apt choice to extend Lula’s legacy of tempered socialism. After a stable first term, however, her popularity nosedived in 2015 with allegations of complicity in the Petrobras scandal, prompting mass public protests and calls for her removal from office.

If Costa skimps slightly on the details of these murky corporate workings, that’s because she regards them as a kind of political macguffin in this slow-burning thriller — an issue of lesser importance amplified by the right to stir public unrest and nostalgia for the days of military dictatorship. The film has a keen sense of how so-called populist politics are seeded and spread in times of economic vulnerability, and vividly evokes — thanks to a restless, roving camera and superb sound design — the frenzied, nuance-flattening power of a change-hungry crowd, whether gathered to praise the left or bury it. (Costa likens the media’s coverage of the protests to sports broadcasting.) Bolsonaro enters the film late, with his grim, ghoulish promises of firearms for all and extremist Christian values. By the time he does, Costa has painted such a ruptured picture of Brazilian society that his rise plays as a steady, sonorous death march, somehow tense in its awful inevitability.

“The Edge of Democracy” makes no claims to objectivity. This is documentary cinema in which facts tangle compellingly with feeling, while passages of solemn, stately mood-building split the difference. The film’s most mesmerizing sequences, assisted by eerily omniscient drone shots, slowly ogle the modernist thrusts and curves of the country’s iconic, Oscar Niemeyer-designed presidential palace in Brasilia — shown empty in the transition period between radically opposed occupants. It’s a haunting sight: a stark, open-plan architectural masterpiece created with a radical future in mind, now housing the man bent on returning Brazil to its darkest, most illiberal past. Costa’s voiceover, forceful at other points, often goes quiet in these dream-like drifts. The ironic symbolism is plain enough to see, though one also senses this excellent, uneasy film occasionally at a loss for words. This is how the hell we got here, Costa shows her audience; how we get out is another question entirely.

Film Review: 'The Edge of Democracy'