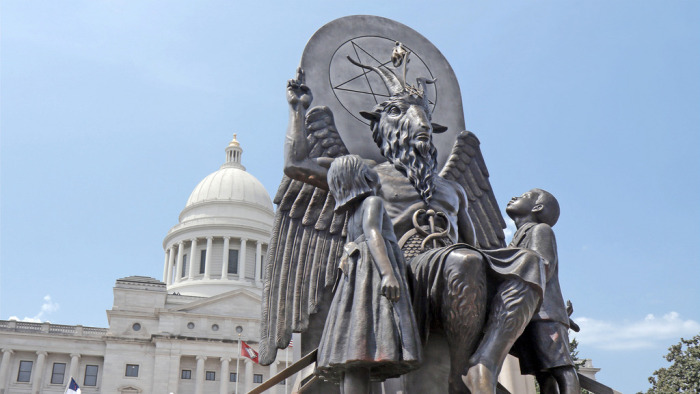 The title card for Penny Lane’s phenomenal “Hail Satan?” waits a beat before adding the question mark. Are the members of the Satanic Temple for real? No … and yes. In the opening scenes, Lane follows its founders to a Halloween store to buy cheap robes they’ll wear to the Florida Capitol to rally in support of Gov. Rick Scott signing a bill to allow prayer in school. “You open the door to God, you open the door to Satan,” one devil worshipper beams. As their first spokesman practices attention-grabbing pyrotechnics in the mirror, Lane notes the chessboard in the room. The Satanic Temple’s combination of shock tactics and anti-discrimination lawsuits is check-and-mate against America creeping towards a Christian theocracy.

Perhaps you remember the Satanic Temple’s successful 2015 campaign to remove the Ten Commandments from the Oklahoma State Capitol by filing paperwork to erect an 8’6″ statue of goat-headed Baphomet? That stunt brought them international attention, multiplying their numbers from three to 50,000 in just three years with new chapters as far away as Sweden and South Africa. Question mark aside, those are serious numbers. And the more hypocritical pushback they receive, the more sincere the members become. After the Boston Archdiocese successfully pressures Harvard against hosting the Temple’s free-speech-testing Black Mass, one member nods, “That’s the moment that I really became a Satanist.”

Who are these Satanists? You’d be surprised. To them, Satan doesn’t represent evil — he represents rebellion, a freethinker who dared to question God’s authority. With that framing, the proper way to worship isn’t, like, killing cats. It’s political protest. As early Detroit leader Jax Blackmore insists, “Activism is a Satanic practice.” That Fox News commentators still frothing fears from the 1980s Satanic Panic (which Lane also scrutinizes) don’t — or won’t — understand the difference just boosts the Temple’s profile.

Satanists can be women in tattoos or geeky men with bowties. There’s hair colors of all shades and people who wouldn’t get a double-take at the grocery store. Many grew up religious. Others were primed for membership as children, like one who never got over the 6th-grade teacher who told him that because Gandhi wasn’t Christian, he was in hell. In a subtle reflection of how controversial people find their avowed religion, a dozen members have their faces pixelated or shadowed, and half use pseudonyms.

Yet, their current spokesman Lucien Greaves looks the part: black vest, crisp haircut, somber disposition, and a clouded-over right eye. Greaves is so visibly “evil” that he’s occasionally forced to wear a bulletproof vest. As he slips on his necessary vestment, Lane cues a soundtrack of sacramental organ music. When he marches toward his next political confrontation, Lane makes a running joke of asking Greaves if he’s excited. “Filled with angst,” he replies. Later, he just says, “No.”

Early on, Greaves tends to take things one step too far. To mock the Mormon practice of baptizing the dead, which posthumously converted Christopher Columbus, Joan of Arc, and Adolf Hitler to the Church of Latter Day Saints, the Temple performs a Pink Mass on the grave of hate-mongering preacher Fred Phelps Jr.’s mother in order to convert her to being a homosexual in the afterlife. Fair enough, if your last name isn’t Phelps, but Greaves also decides to drop his pants and teabag her headstone. That’s the part that got headlines, which is important mostly because as the Temple grows in prominence, Greaves is tasked with ensuring that the new chapters maintain decorum. Can 50,000 iconoclasts confirm to a set of rules? It would take a miracle.

Lane has no problem gently mocking the Temple when its protests muddle their message, like an anti-anti-choice demonstration where the Satanists writhe in baby masks and BDSM chains. “Hail Satan?” isn’t here to convert the audience to Lucifer — though, judging by the audience’s frequent spontaneous applause, some people may leave transformed. Like her fantastic 2013 doc “Our Nixon,” Lane sets out to subvert American history with intelligence and wit. Here, she asks us to question why certain religions are deemed “normal,” even though, notes one Temple member, Catholic mass is all about the symbolic drinking of blood. But she’s also out to entertain, whether that means clips of “Rosemary’s Baby” and “Geraldo,” goofy cartoons where Uncle Sam explains the Constitution to Porky Pig, or simply observing the deadpan humor of a Temple branch who adopts a highway and stabs litter with pitchforks.

Halfway through the documentary, Lane settles on a villain: Arkansas state Sen. Jason Rapert, a Tea Partier frequently pilloried online for wishing we could nuke Isis while complimenting Saudi Arabia on turning religion into law. When Rapert erects the Ten Commandments at the Capitol, the Temple’s Baphomet statue turns its be-winged attention to Little Rock. Lane takes the opportunity to run through the blurring of church and state, which began just 60 years ago when pastor Billy Graham convinced the country to fight godless Communism by adding the phrase “In God We Trust” to the dollar bill and Pledge of Allegiance. As for Rapert’s certainty of the great American tradition of erecting the Ten Commandments on government property, Lane traces that not-so-shining legacy back to a Charlton Heston PR stunt.

Melissa Gorga, 40, Shows Off Results Of Her Workout Dedication In Bikini On ‘RHONJ’ Trip — Pics