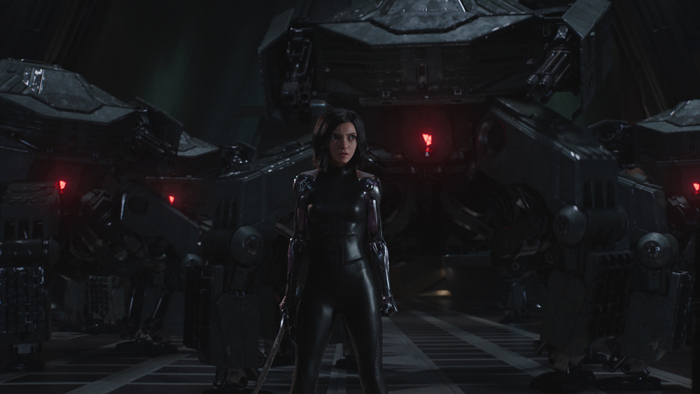 It is a view broadly held in Hollywood that writing is not the greatest of James Cameron’s manifold filmmaking gifts: The visual storytelling of his blockbusters is what sticks, not the plywood poetry he sticks in the mouths of his often perfunctory characters. A new Cameron production that boasts his imagination behind the keyboard rather than the camera, “Alita: Battle Angel” does little to change that perception. Directed instead with budget-splashing brio but little genuine inspiration by Robert Rodriguez, this manga-based cyberpunk origin story is a pretty zappy effects showcase, weighed down by a protracted, soul-challenged Frankenstory that short-circuits every time it gets moving.

Landing somewhere at the intersection of “Pinocchio,” “Ghost in the Shell” and, uh, “Rollerball” — yet more generic than this disparate cocktail of reference points might lead you to expect — “Alita” might prove a shiny enough commercial distraction in the bleak midwinter box office to greenlight the copious sequels promised by its frustratingly splintered narrative. If it does, there are some promising elements here to build on, beginning with the title character: Played with perky enthusiasm by Rosa Salazar, a long-serving side player easing into kickass lead territory, Alita is a refreshingly buoyant presence in a genre dominated by more dour heroines. It’s a shame, then, that Salazar’s personable performance is smothered somewhat by an eerie digital makeover: Her smoothed features and dewy, supersized peepers may be a direct nod to manga character design, but they make her look more like an android imagined by Margaret “Big Eyes” Keane.

That unsettling realization is hardly allayed by the never-quite-benevolent presence of Christoph Waltz as Alita’s steampunk-style Geppetto. Waltz is Dyson Ido, a doctor who specializes in building and repairing cyborgs from scraps found on the wastelands of Iron City, a culture-mashed dystopia forged from the ruins left by a vast world war 300 years previous. (The year, we are told, is 2563, so cheer up: The apocalypse is further away than you think.) Alita is his latest creation, a girlishly slight but steely fusion of flesh and wires who awakens with a blank-slate brain that gradually admits glitchy memories of battles centuries before. That explains her unexpectedly fierce, instinctive and impervious combat skills, initially put to benign use playing street “motorball” — Iron City’s favorite pastime, a pumped-up rollerblading basketball hybrid that, at its most stadium-filling professional level, takes on the crowd-pleasing aura of ancient gladiatorial combat.

For reasons that Cameron and Laeta Kalogridis’ addled, humorless script has a hard time explaining, Alita’s heroic destiny lies in this knucklehead sporting league, though not before a host of other digressions — revolving mainly around a convoluted but strangely low-stakes realm of urban bounty hunting and vigilante justice, where many of the city’s least friendly cyborgs are put to work. There’s a briefly dangled tangle of mystery over serial killing and the illegal body-part trade, serving little lasting purpose but to corner Alita into a series of perilous tight spots. She negotiates them each time with impressively elastic fight choreography, to the slackened, admiring jaw of Hugo (relative newcomer Keean Johnson), her tapioca-bland love interest.

Alita and Hugo’s relationship opens up the film’s lone sliver of philosophical inquiry: She’s cyborg, he’s allegedly human, and she briefly wonders whether it’s possible for them to love each other. Both are so plastically rendered, however, that the point is moot. Most characters here, in fact, register as robotic regardless of species, beginning with an oddly hazy gallery of villains: Jennifer Connelly (who at least secures the most future-chic get-ups on offer from costume designer Nina Proctor) is stranded serving up killer glares with entirely opaque motivation as Ido’s ex-wife, right-hand woman to Mahershala Ali’s equally elegant and inscrutably sinister motorball mogul.

Both are subservient to a less visible force of evil — housed in an uncharted metropolis floating miles above Iron City’s rusty sprawl — but it’s awfully hard to care when the film keeps changing its mind about what its heroine is so indomitably fighting for. Evidently a number of threads from Yukito Kishiro’s source comics have been loosely braided by Cameron and Kalogridis, but a clear through line is only sputteringly apparent.

“Alita” is most fattily enjoyable, then, when the plot mechanics hit pause and the clanking, sparking, metal-on-metal spectacle of it all goes into berserk overdrive — abetted by a shrieking, high-kitsch score from Tom Holkenborg (better known, and more aptly credited in this context, as DJ Junkie XL). The motorball sequences, in particular, are whooshing Big Mac cinema of the most jittery, adolescent order, finding the sweet spot between Rodriguez’s scrappy B-movie sensibilities and the state-of-the-art spectacle afforded by resources far pricier than what he’s used to. Cinematographer Bill Pope and VFX ace Joe Letteri give the film the full, fluid benefit of their expertise, pulling off synthetic magic tricks in frame after frame, but there’s more liquid-mercury polish than real beauty in the final result: “Alita: Battle Angel” may feel, for better and worse, like a Cameron creative property, but it also can’t escape the thin, spiritless air of a delegated assignment.