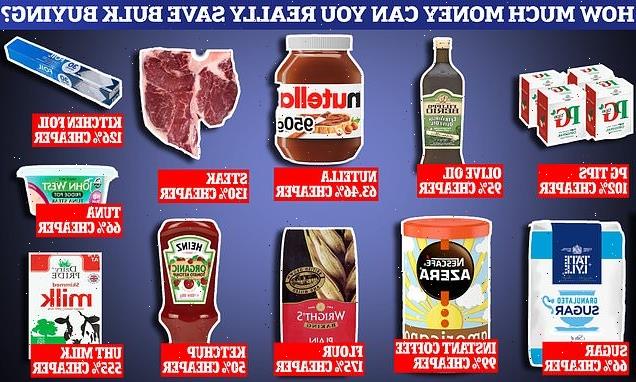 FEMAIL reveals how much money can you really save bulk buying

Time to head for the wholesalers! As grocery prices soar by up to 20% FEMAIL reveals how shoppers can pick up essentials for just a fifth of the cost by bulk buying

Groceries prices in the UK are increasing at the fastest rate in more than a decade, with inflation soaring to seven per cent as the cost of living crisis rumbles on.

Many shoppers are heading to budget retailers including Lidl and Aldi to save money – with the price of pasta up 10 per cent, while lamb is up 17 per cent and oils and fats have surged as much as 34 per cent, according to the consumer price index.

Soaring inflation and paired with slow wage growth has seen many Brits turn to wholesalers to bulk buy product in order to save precious pennies.

Many food wholesalers that usually serve restaurants, food retailers and leisure attractions were forced to rapidly change their business model to offer online ordering to everyone in lockdown when the businesses were shut and supermarket shelves were left bare.

Some, including JJ Foodservice have kept selling to the public while others such as Costco have always sold wholesale price straight to household costumers. 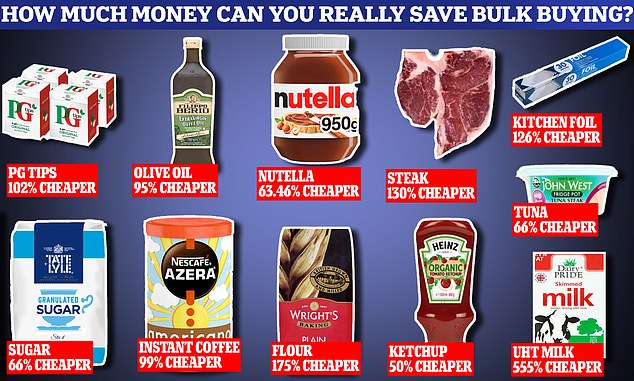 US cash-and-carry chain Costco has 29 outlets in the UK, and to shop there customers have to pay a membership fee, with the store making a whopping $3.8billion a year in membership fees alone.

Customers wanting to get their hands on a precious membership card need to own their own business and sign up as a trade member at the cost of £26.40 a year.

Those who aren’t business owners can also sign up as an individual (at £33.60 a year) but need to be working in, or retired from certain professions, including:- banking and finance, local government, emergency services, airlines, education, the civil service, armed forces, health services and insurance.

Those who are qualified as accountants, architects, surveyors, solicitors, and engineers can also join.

Online only membership – at a cost of £15 a year – is also open to anyone.

Customers can easily make this back, with products costing significantly less than buying them at the supermarket

Instant coffee is also twice as expensive at Sainsbury’s compared to Costco, while essentials like olive oil and sugar are also half the price from Costco.

Costco also often offers up tech goods up for grabs at a discounted price, including TV, smart watches, barbeques and coffee machines.

You’ll save money… but you need the space for it!

Wholesalers are able to keep their prices low by selling in bulk – but this means shoppers will need the storage space for it.

Many customers say they need a chest freezer or garage to store all the extra goods.

Before heading into one of the UK’s 29 stores, customers will need to empty their cupboards to make room for the likes of toilet roll (sold in packs of 45), jam (sold in 750g jars), and bottled water – sold in palettes of up to 1600 bottles.

Fancy more pantry goods? Rice is sold in 20kg bags, spaghetti is sold in 3kg packets and baked beans are sold in packs of 24 tins.

The supermarket – worth an astonishing $245 billion – even has a jewellery section where you can buy bars of gold.

Meanwhile, national wholesaler JJ Foodservice is encouraging consumers to buy in bulk saying they are offering chef quality at home – for just a fraction of the price.

As a leading supplier to hotels, restaurants and pubs, the wholesaler has a wide range of ‘chef-quality ingredients at wholesale prices’ including premium steak cuts.

‘You can buy a fresh UK beef fillet from just £4 per steak – they usually go for about £25 in a restaurant!’

‘We sell them in packs of five, so once you chip in with a few friends or neighbours, you can be eating chef quality food at home, at an affordable price.’

The JJ Home range includes more than 600 items that are significantly lower cost than the equivalent product sold in a supermarket.

Other wholesalers, who began selling to the public during the pandemic, have continued to serve individual customers, with no exceptions to sign up to membership.

Specialty fine food supplier First Choice Produce sell a range of meats an vegetables straight to the public, while All Greens Wholesale, who have been supplying some of London’s best loved restaurants and hotels for years now delivers direct to homes across London.

Nature’s Choice, which supplies food for Ascot, the Olympics, the Royal Albert Hall, and Wimbledon, also delivers across London.

Jamie Oliver children: How many kids does he have with wife Jools? – The Sun

Who is Don Moore? The boxer fighting Floyd Mayweather on a helipad in Dubai
World News