Both major parties’ election pitches are failing to address the biggest issue facing food production, according to the National Farmers’ Federation, which is demanding action to adapt to global warming that is already costing farmers tens of thousands of dollars in lost earnings.

NFF president Fiona Simson said there had been “absolute radio silence” from both parties on new commitments to help the agriculture sector adjust to climate change, which has raised average temperatures 1.4 degrees in Australia on pre-industrial levels. 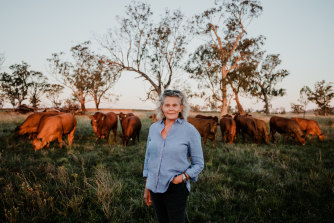 National Farmers’ Federation president Fiona Simson says she’s disappointed that targeted climate adaptation investment has not been on the election agenda of either major party.

Climate change has cost Australian farms an average of nearly $30,000 a year in profits over the past 20 years compared to average earnings from 1950 to 2000, according to the Australian Bureau of Agricultural and Resource Economics and Sciences (ABARES).

Simson said the Coalition had developed several good initiatives to help farmers cope in tougher conditions such as the $5 billion Drought Future Fund and to trial the Biodiversity Stewardship Scheme.

But she was disappointed that targeted climate adaptation investment has not been on the election agenda of either major party.

While both are promoting a massive increase in carbon farming to offset industrial emissions, Simson said it could have the “unintended consequence” of hollowing out rural economies.

NFF’s climate wish list is topped by a call for both major parties to commit to a “minimum $2 billion fund” to implement the biodiversity stewardship scheme and reward farmers who improve natural ecosystems on their land.

“We need commitments from both sides of politics … to bring together a range of agriculture schemes,” Simson said.

The Coalition provided $4 million in 2019 to fund a trial of a sustainability framework, designed to channel the nation’s climate research and development efforts into practical solutions for farmers.

Simson was most critical of the Labor party, which has not yet announced a policy targeted directly at agriculture during this election campaign.

Both parties have committed hundreds of millions of dollars to support carbon farming, a climate change initiative under which farmers plant trees, improve their soil or lock up forests on their land to sequester carbon from the atmosphere.

Agriculture is on the cusp of opening up a new revenue stream. Big miners, manufacturers and other industrial polluters are lining up to buy farmers’ carbon credits to comply with climate goals by offsetting their emissions.

But it’s a vexed issue for farmers as their customers along the supply chain look to buy carbon-neutral food. Industry experts are warning food producers they risk paying for their own carbon offsets if they have already used their credits by selling them to a mining company.

Simson said governments were too focused on “lock up and leave offsets”, where farmers are paid for tree planting or protection on their property.

“Current offset schemes create unintended consequences by taking land out of production, which will shrink rural communities and take people from the bush.”

Simson said the best election policy so far had come from rural Victorian independent MP Helen Haines, who proposed a scheme to set up a network of 200 agricultural extension officers to work one-on-one with farmers to help them introduce new climate adaptation techniques to their production systems.

Haines’ policy is costed by the Parliamentary Budget Office at $32 million a year and could help farmers take up stubble retention to protect soil moisture, soil carbon sequestration, livestock feed supplements to cut cows’ gassy burps and so on.