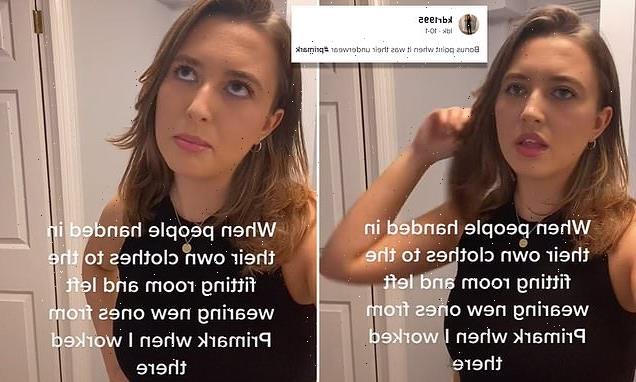 Ex-Primark employees reveal what it's REALLY like working in store

Ex-Primark employees have revealed what it’s really like to work in the high-street store – from their grossest finds to top secrets.

One woman, TikTok user @kdr1995, from London, shared her experience in a video where she detailed the grim reality of what customers would get up to – including how they’d often leave the fitting rooms wearing new items they’d just picked up on the shop floor.

She went on to explain how brass-necked shoppers would ditch their old clothes for brand new ones in the changing rooms, and would even go so far as to handing over their old outfit to the shop assistant – dirty underwear included.

In the video, the shop assistant can be seen rolling her eyes to the back of her head as she recalled: ‘When people handed in their own clothes to the fitting room and left wearing new ones from Primark when I worked there.’ 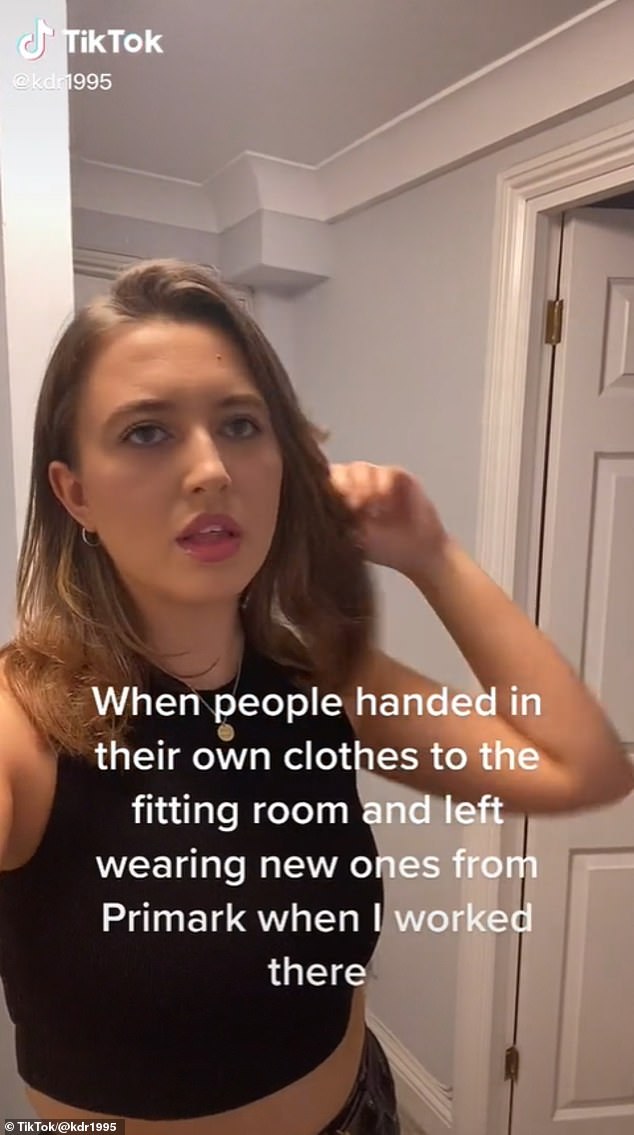 An ex-Primark employee, known only as TikTok user @kdr1995 (pictured), from London, has revealed what it’s really like to work in the high-street store 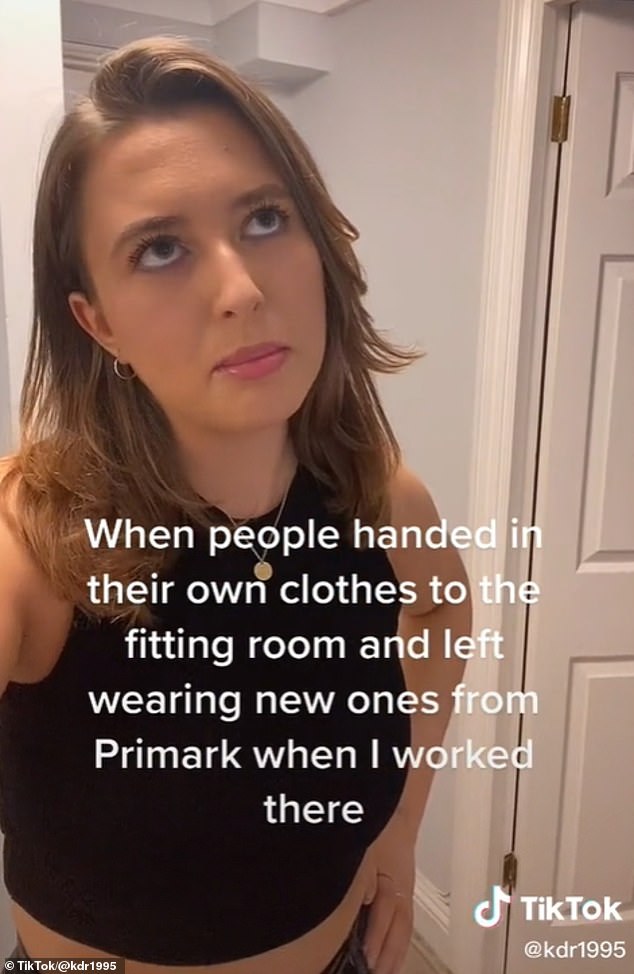 Alongside the video, she penned: ‘Bonus point when it was their underwear’ (pictured)

She added: ‘Bonus point when it was their underwear #primark.’

And it wasn’t long before the shocking revelation resulted in other Primark employees sharing their similarly gross experiences at work.

‘I found a used sanitary towel stuck to the mirror when I checked the fitting rooms,’ wrote one.

Another posted an emoji of a man hoovering and added: ‘Me when I worked in Primark and a toddler p**** on the floor three minutes before the end of my shift.’

Elsewhere, a third recalled her stomach-churning discovery when she was midway through a shift – and it’s enough to turn anyone’s tummy.

‘Someone pooped in a bag on my shift and left it there,’ she commented.

Meanwhile, a further person responded to the initial post and revealed that she was one of the guilty shoppers who had handed their old clothes back to the shop assistant before walking out in a brand new ensemble.

’15 year old me thought I was slick wearing old black jeans in and new black jeans out,’ she admitted.

But it’s not all bad news. TikTok user Georgia Ponton, 20, from Kettering, who used to work in Primark has revealed her top secrets from her time working in store – including how to bag free hangers to getting the best seasonal items. 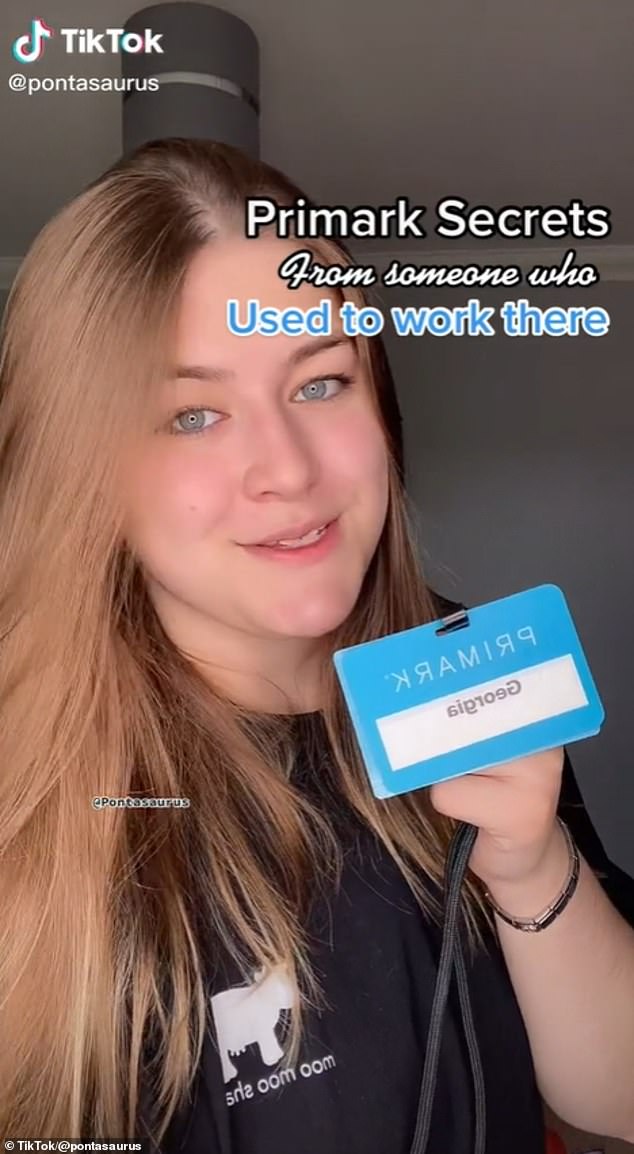 TikTok user Georgia Ponton (pictured), 20, who used to work in Primark has revealed her top secrets from her time working in store

She explained how any customer is able to ask for a bag of hangers rather than forking out for them elsewhere.

‘If you go up to someone that is working on the till and say “Can I have a bag of hangers?” then they will give it to you,’ she said. ‘So stop buying hangers because you can get them for free.

‘Behind every till is a massive bin where we put the hangers for people that don’t want them, and I’m not really sure where they go afterwards, but we need to get rid of them.’

She went on to suggest the best products at the back of the rails – particularly when i comes to changing seasons.

‘Check the back of all the rails,’ she explained. ‘If the season was about to change, then we would put anything that needed to be sold right at the front and anything new at the back because we needed to prioritise the old stuff.’

Poleighh Soper – another ex-employee, from the UK, often shares her revelations to social media in videos titled: ‘Secrets of an ex primark employee.’ 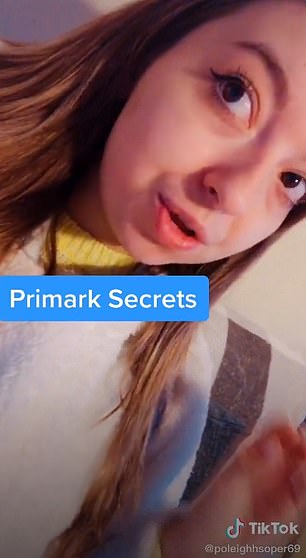 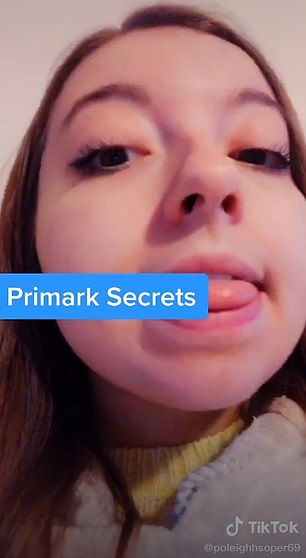 Poleighh Soper (pictured, left and right) revealed how staff have to carry out theft checks at the tills

She claimed that when your a request for ‘Mr Brown’ on the tannoy, it is actually a shout out for security.

‘Say your security company that stands by the door and makes sure nobody is stealing…say their name is like ‘Brown Security Services’, that’s who they’re calling,’ she explained.

‘So, when they say ‘Can Mr Brown please come to the customer service checkout,’ they’re actually calling for security – they just don’t want the customers to know that.’

The ex-Primark employee also revealed how staff would have to carry out theft checks at the tills.

‘You know when you go to the till and you’ve got like a makeup bag or something, they’ll always open it up and take out the tissue? That’s to check that you’re not stealing,’ Poleighh said.

‘So, we have to take the tissue out to check there’s nothing else in the bag, however, we’re not actually allowed to accuse you of stealing.

‘We could open that bag and find ten pieces of jewellery and three pairs of socks in there – [but] can’t accuse you of stealing it.

‘We simply have to say: “Would you like that as well?”‘

Nicole Kidman Relies on This Styling Cream for ‘Curls Without Frizz’