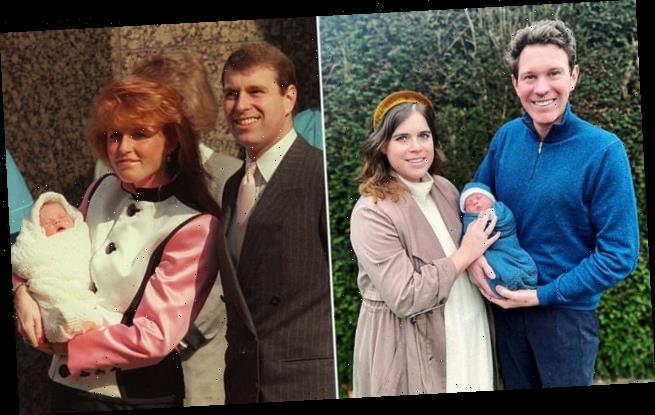 The family pink? Princess Eugenie’s outfit choice for August’s baby photo echoes the colours worn by the Duke and Duchess of York during her OWN first public outing 30 years ago

The low-key outfit Princess Eugenie wore in her new son’s first baby photograph appears to be a subtle tribute to the moment her own parents unveiled her to the world 30 years ago.

The royal, who gave birth to her first son with financier husband Jack Brooksbank on February 9th at London’s Portland Hospital, eschewed the more formal photo opportunity her parents enjoyed in 1990 in the photos released on Instagram on Saturday, but offered a nod to her own first outing in her clothing choices.

Dressed in a soft pink coat with a high-necked cream knitted dress, the Princess picked the same colours that her mother Sarah Ferguson chose when she left Portland Hospital with a then baby Eugenie in her arms. On that day in March 1990, Prince Andrew opted for a baby pink tie to go with his pin-stripe suit. 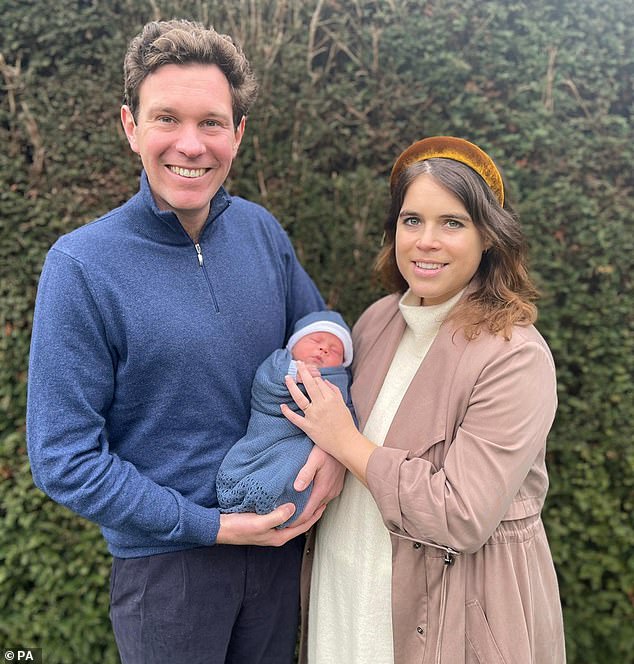 First official photo released by Princess Eugenie and Jack Brooksbank on Saturday of their newborn son saw the royal wearing soft pink and white, with a golden velour headband 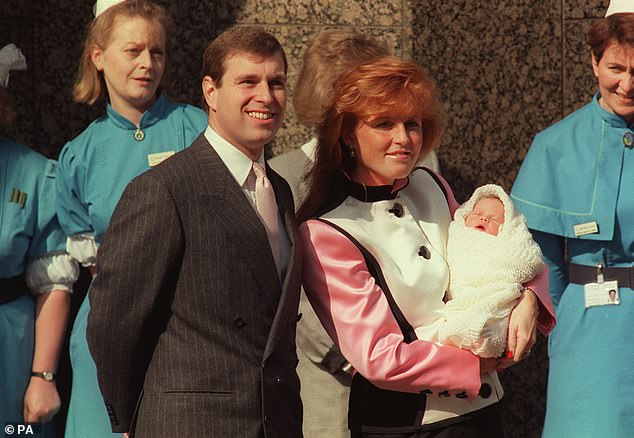 The Duke and Duchess of York leavin Portland Hospital, where August was also born, in March 1990 with a baby Eugenie in their arms. Sarah Ferguson chose a formal pink and white satin jacket while Prince Andrew opted for a baby pink tie to go with his pinstripe suit

The family are famously close and there was perhaps a nod too to Sarah Ferguson’s penchant for headbands in Eugenie’s statement headwear, which complemented her subtle make-up and loosely worn hair.

The £204 Thada headband by Jennifer Behr certainly felt suitably regal though – you can trace the headband back to Anne Boleyn, and the Duchess of Cambridge is also partial to wearing one.

Meanwhile new father Jack, who cradled the baby in his arms, donned a soft blue half zip jumper for the occasion. The couple swaddled their son in a baby blue blanket, with a matching hat atop his head.

It’s thought the shawl could be a blanket by esteemed Nottingham-based company G H Hurt & Son, which has gifted a new shawl to every royal baby for the last seven decades. 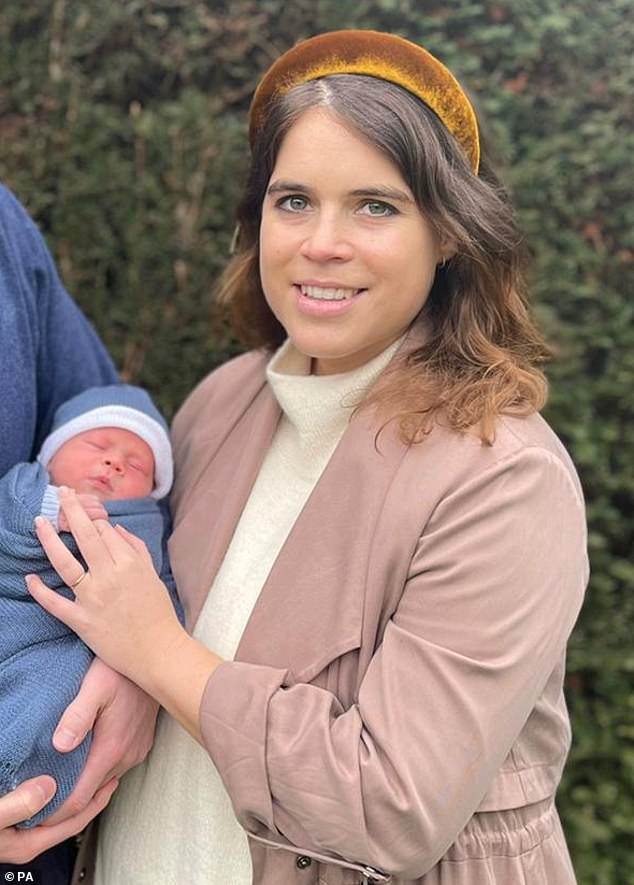 Regal headwear:  Eugenie donned a £204 Thada headband by designer Jennifer Behr and perhaps offered a tribute to her mother, who’s partial to wearing such headwear 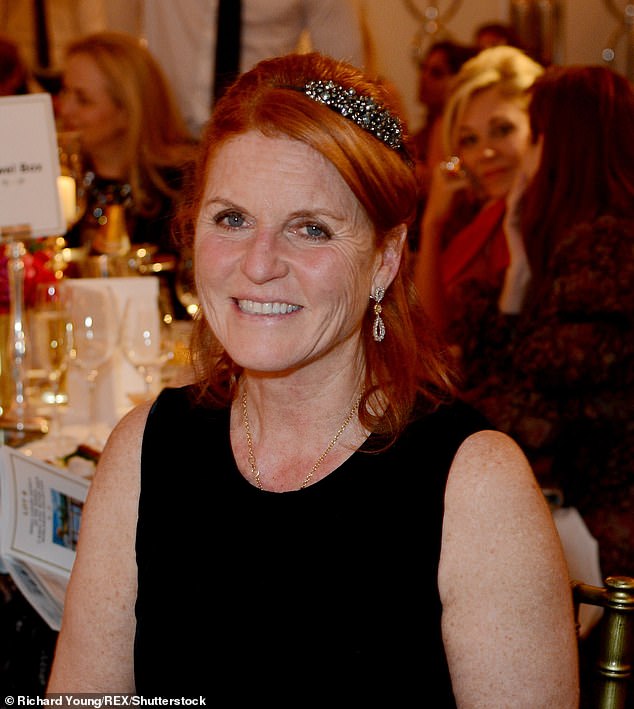 Royal favourite: You can trace the headband right back to Anne Boleyn, and the Duchess of York has always made it an integral part of her wardrobe (Sarah Ferguson pictured in 2017) 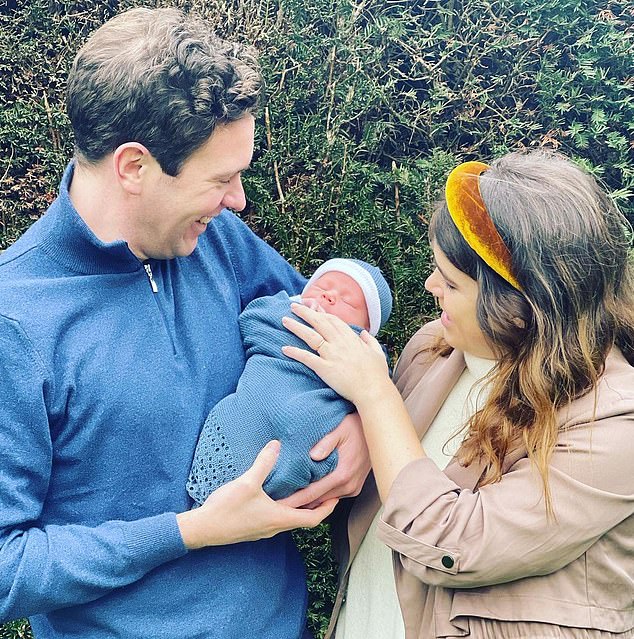 In the first photographs of the family-of-three, Jack cradled newborn August in his arms while Princess Eugenie could be seen fawning over him. August wore a shawl thought to be made by G H Hurt & Son, which has gifted a blanket to every royal baby born in last 70 years 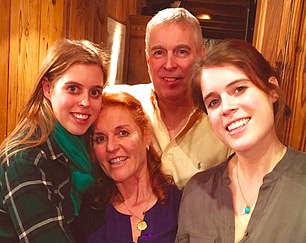 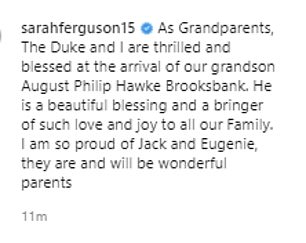 Shortly after Eugenie shared her post, Sarah Ferguson posted a tribute to her new grandson, in which she said she and Prince Andrew were ‘thrilled’ over the new arrival (pictured left, Fergie, Andrew and Princess Beatrice with Eugenie and right, her message today)

Shortly after Eugenie shared her post, Sarah Ferguson posted a tribute to her new grandson, writing: ‘As Grandparents, The Duke and I are thrilled and blessed at the arrival of our grandson August Philip Hawke Brooksbank.

‘He is a beautiful blessing and a bringer of such love and joy to all our Family. I am so proud of Jack and Eugenie, they are and will be wonderful parents.’

August Brooksbank is Princess Eugenie and Jack Brooksbank’s first child, The Duke of York and Sarah, Duchess of York’s first grandchild, and the ninth great-grandchild for The Queen and The Duke of Edinburgh. The new baby will not have a royal title though, only the grandchildren of the monarch are automatically entitled to one.

Navy hero Prince Philip, a Reverend and the husband that Queen Victoria mourned for the rest of her days: The men who inspired the name August Philip Hawke Brooksbank 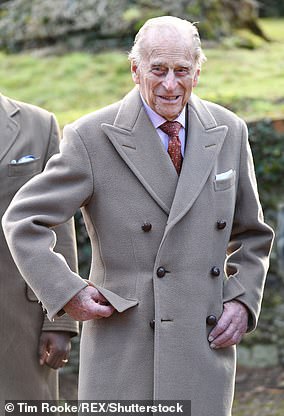 Married to Britain’s Queen Elizabeth since 1947, Prince Philip was the son of Princess Alice of Battenberg and Prince Andrew of Greece and Denmark

So who are the men who inspired the name August Philip Hawke Brookesbank?

Married to Britain’s Queen Elizabeth since 1947, Prince Philip was the son of Princess Alice of Battenberg and Prince Andrew of Greece and Denmark.

He was born into two royal families but was exiled from Greece while still an infant. He went to schools in France, Germany and the UK before joining the Royal Navy in 1939, aged 18.

Prince Philip, born Prince Philip of Greece and Denmark, met then-Princess Elizabeth in 1934 and the pair began corresponding in July 1939. After the war, Philip was granted permission by King George VI to marry her.

Before the engagement was announced in July 1947, the prince abandoned his Greek and Danish titles and became a British citizen. He adopted the surname of his maternal grandparents – Mountbatten.

He left active military service after Elizabeth became queen in 1952, after reaching the rank of commander, and was formally made a British prince in 1957.

He is now a patron, president, or member of more than 780 organisations and is styled the Duke of Edinburgh. He retired from royal duties on August 2, 2017, aged 96, after completing 22,219 solo engagements since 1952.

Prince Philip was known to regularly put his foot in his mouth by swearing during royal visits. In 2015, he told a photographer to ‘just take the f***ing picture’ during a photocall at the RAF Club. 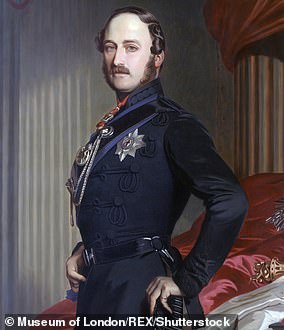 Queen Victoria’s husband Albert, the prince consort, was born into the Saxon Duchy of Saxe-Coburg-Saalfeld to parents well connected with Europe’s ruling monarchs

Queen Victoria’s husband Albert, the prince consort, was born into the Saxon Duchy of Saxe-Coburg-Saalfeld to parents well connected with Europe’s ruling monarchs.

During their courting stage, Victoria wrote: ‘[Albert] is extremely handsome; his hair is about the same colour as mine; his eyes are large and blue, and he has a beautiful nose and a very sweet mouth with fine teeth; but the charm of his countenance is his expression, which is most delightful.’ She proposed to him on October 15, 1839.

He quickly developed a reputation for supporting public causes including education reform and the abolition of slavery worldwide. Queen Victoria trusted him to deal with the household, office and estates.

The prince developed the constitutional monarchy by persuading his wife to be less partisan in her dealings with parliament and when he died aged 42 Queen Victoria went into mourning for the rest of her life.

Rev. Edward Brooksbank held the office of Justice of the Peace for the West Riding, Yorkshire, and lived at Healaugh Manor in Yorkshire.

The vicar of Tickhill first married a Hannah Heywood who gave birth to his three children but died in 1846, aged 58. The reverend then married Mary Parker on December 5, 1848.

He graduated from Cambridge University with a Master of Arts (MA) and died aged 93. 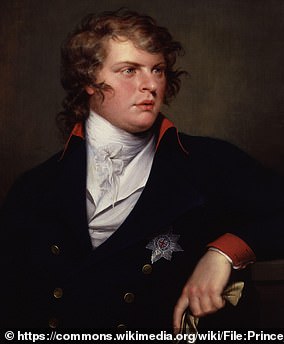 While travelling in Rome he met Lady Augusta Murray and the couple secretly married on April 4, 1793. They married a second time without revealing their full names at St George’s, Hanover Square, Westminster, on December 5, 1793.

Both marriages took place without the permission of his father. Because of this, in August 1794, the marriage was annulled on the grounds that it contravened the Royal Marriages Act 1772.

He continued to live with Lady Augusta until 1801, when he received a parliamentary grant of £12,000 and the couple separated. Lady Augusta was given custody of their children Augustus Frederick d’Este and Augusta Emma d’Este. She received maintenance of £4,000 a year.

A year after the death of Lady Augusta, the Duke of Sussex married a second time on May 2, 1831, again without gaining the permission of the sovereign, to Lady Cecilia Letitia Buggin.

She was never recognised as the Duchess of Sussex but became Duchess of Inverness by Queen Victoria in 1840.

Prince Augustus was the favourite uncle of Queen Victoria and gave her away at her wedding to Prince Albert.