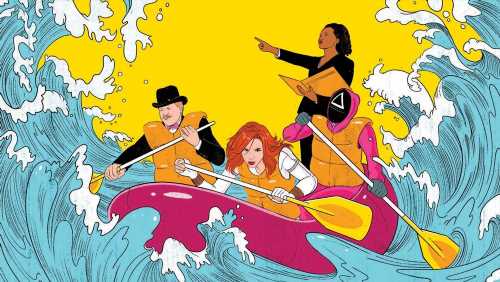 Entertainment Lawyers Guide Hollywood Into Future of Disruption and Challenge

It doesn’t take a team of lawyers to see how dramatically the entertainment industry has changed in just a few short years—but they are probably among the best people to help understand how to navigate it.

Studios have shuttered, consolidated or acquired their competitors. Streaming services have exploded in popularity and expanded their worldwide footprint. And starting in 2020, a pandemic forced virtually everyone to adjust almost overnight to these changes, from producers reacting to on-set protocols to consumers demanding more content delivered directly into their homes.

The result: From private arbitration to public battles of will, bellwether cases to boilerplate deals, lawyers are increasingly shaping the industry’s future.

For John Berlinski, a partner at Kasowitz Benson Torres, one of the firms representing Scarlett Johansson during her dispute with Disney in 2021 over its distribution of “Black Widow,” the ongoing challenge has been synchronizing traditional methods of compensation with the rise of platforms that use different and often unclear calculus to determine a creator’s worth.

“The actual value that talent is bringing used to be measured in things like box office receipts when it comes to film, or in television,
Nielsen ratings or the longevity of a series,” Berlinski tells Variety. “So what a lot of folks are dealing with now on the transactional side is how do you appropriately compensate talent for the value that they are bringing to a project when the metrics that we’ve used historically to value that talent’s work are changing so dramatically?”

Lindsay Conner, a partner at O’Melveny & Myers, which also represented Johansson, believes the pandemic’s greatest impact was to accelerate the shift to consuming content on streaming services. “Even though they’re not traditionally grouped with what Hollywood thinks of as ‘the majors,’ the level of content spending by Netflix and Amazon and Apple is gigantic, and the streamers are interested in creating and licensing content that is as diverse thematically as it is culturally,” Conner says.

“It has blurred the lines of film and television, and where they are exhibited and consumed is less bound by rules and windows than at any time in the last century,” he adds. “And the enormous changes in our business really put a premium on lawyers staying ahead of the curve in dealmaking and in keeping up with the market to prepare for what’s next.”

Michael Gendler of law firm Gendler & Kelly has negotiated on behalf of Shonda Rhimes, Alex Kurtzman and David E. Kelley. He says that the consolidation of media companies, even as they develop their own streaming services to acquire and create content, has radically changed the revenues generated even by industry standard-bearers like his clients. “Old fashioned backend deals [worked] where something was on network and then sold foreign, and then everything else after that, you could renegotiate your network license fee and reap huge sums,” Gendler says. “But that market’s gone, or been so vastly diminished to be considered gone.”

Ziffren Brittenham managing partner Cliff Gilbert-Lurie, longtime rep for the formidable television impresario Dick Wolf, observes that this consolidation creates a bifurcation of haves and have-nots between Hollywood’s A-listers and everybody else. “As you consolidate, you would think you would have the stronger companies left that have the financial resources to make the most aggressive and lucrative deals with the top talent that create the shows that attract and retain customers. But when you get below the A players, then it’s not likely going to be as lucrative for everybody else,” Gilbert-Lurie says. “Like in the motion picture business, 3-5% of the top talent in the industry probably takes out 80% of the economics, and I expect that to happen in the television streaming business.”

He adds: “If a term deal doesn’t perform, it won’t get renewed. And if they do perform, they will get renewed — but that will leave less money for other people.”

Gordon Bobb, who in January was elevated to partner at Del Shaw Moonves Tanaka Finkelstein Lezcano Bobb & Dang, indicates that the adjustments being made by networks, studios and streamers maintain similar compensation rates at the beginning of a contract, but at the cost of down-the-line income streams that creators traditionally relied upon. “I think there is a nominal attempt to increase the upfront compensation, but not nearly enough to compensate for the lost revenue or potentially lost revenue for abandoning the traditional theatrical release model,” Bobb says. “It’s compounded by the fact that these streaming services take all rights in perpetuity, worldwide, so that there is no potential for future exploitation of those properties which would generate additional revenue to the talent.”

Hollywood accounting has always been notoriously opaque when assessing a project’s success. Although myriad costs go into development, production, promotion, distribution and more, it nevertheless seems difficult sometimes to understand how a film or series could publicly earn hundreds of millions of dollars and still somehow not break a profit. Unsurprisingly, transparency from studios and especially streaming services remains a mostly theoretical concept, or one that to creators is framed by quotation marks. “I think that those are very closely guarded secrets still,” says Berlinski. “But I think on a selective basis when it serves their interest or they believe it serves their interests, I think they’re disclosing more of that information.”

Adds Bobb, “I do know that in certain situations where they want to communicate success to a client they will kind of open up the kimono, or when they want to justify not moving forward with something, the will share that information. But I don’t think as a general rule that the streaming services are now totally transparent with their creative partners.”

Then there’s the international factor. While series like “Squid Game” and “Money Heist” provided a very public windfall of viewership, and consequently, revenue, for Netflix, Gendler says that they’re just the tip of a much bigger iceberg in terms an industry-wide push for non-domestic content. “Two things are happening. One is some people believe we’re reaching a saturation point for streaming here, which may or may not be true,” Gendler says. “But certainly in terms of growing these companies, everyone’s looking outside the United States for subscribers. So there’s going to be, I think, more foreign content, not just coming to our country, which wasn’t all that common before, that’s wildly successful … but also more foreign language content funded by the same companies that we’re going to for our domestic clients.”

Regardless of these changes in the way content is created, paid for and presented, Bobb says the one thing that remains the same is the consumer’s attraction to proven talent. “I still think that this is a star-driven business, whether it’s in front of the camera or behind it,” he says. “There is an abundance of content out there, but you have to break through the clutter and so I think the tendency is for the streamers to go to those creators who have a name and a following, who are going to be able to drive subscribers.”

If the deals that these lawyers negotiate sometimes reach a contentious pitch in the court of public opinion, Berlinski says that he tells his clients to remain as civil as possible. “Most of my clients want to be treated fairly. Most of them are not looking for a windfall,” he says. “Most of them are saying, ‘Hey, look, I contracted to receive X number of dollars in success and now someone is trying to manipulate things behind the scenes so that I get less than what I contracted for.’”

Berlinski believes that most people don’t want to be in litigation. “I tend to advise them to do everything you can to stay out of litigation, even though that’s what I do,” he says. “But I also think if people feel they’ve been treated fairly, and if people are candid with each other… there’s no reason why litigation can’t be a means to an end, to either starting or continuing on a successful relationship with the opposing party.”

Despite the power and authority that entertainment lawyers wield on behalf of their clients, Gilbert-Lurie echoes a sentiment shared by his colleagues that their ultimate goal is to provide resolution and stability, no matter what changes are right around the corner. “You’re the person who’s supposed to be wise and thoughtful in a world of constant change and upheaval,” he says. “You have to be that rock in this river of rushing deals, rushing information, rushing changes. The clients decide what they want to write or what movies or television shows they want to be in. And I have to just make it the best for them as a calm voice of reason, and thoughtfulness and honest advice.”