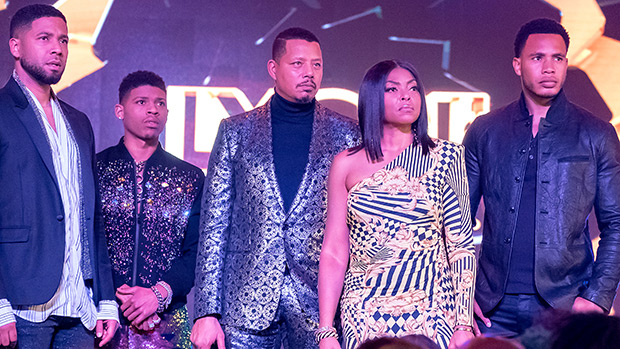 The season 5 fall finale of ‘Empire’ gave us a huge hint about who could be in the coffin. The last seconds of the Dec. 5 episode featured one major character flatlining!

The fall finale picks up right where the last episode left off. Little Bella is pointing a gun at Hakeem, Tiana, Cookie, and Lucious. She has no idea what she’s doing, and her family is terrified. Hakeem is able to get his hands on the gun by singing to Bella. Tiana starts to blame herself, but Cookie tells her that this is not her fault. Meanwhile, Lucious and Hakeem have a talk. Lucious and Cookie walked that hard life, so Hakeem and his family didn’t have to. Lucious tells Hakeem to get his act together. Cookie stresses to Tiana to take care of herself and the kids. “Let Hakeem do Hakeem,” Cookie says. Keep moving forward, and “maybe Hakeem will catch up.”

Kai reveals to Jamal that all of Lucious’s information on Kingsley’s data mining has checked out. Kingsley’s been using law enforcement to track Empire Xtreme users without their consent. Jamal thinks Kai’s entering rough waters but Kai’s going to follow the story.

Cookie is extremely focused on the big showcase. Until their future is secure, she’s going to be worried about money. Lucious doesn’t just have this on his hands, he’s stressed about Kingsley as well. Kingsley finds himself in a bit of a bind, too. Giselle wants to run Empire or she goes to press with the information that Lucious is his father. Kingsley doesn’t like the idea of being blackmailed. He offers her a co-CEO position. They can run Empire together and destroy Lucious. Giselle seems on board with this.

Kai’s story on Empire Xtreme is broadcast. Giselle and Becky freak over the news. Naturally, Kingsley is furious. When Kelly Patel comes in ranting and raving, Kingsley tries to blame this all on Lucious. Giselle goes into crisis mode with the press. Kingsley promises he’ll bring Lucious’s head in on a platter.

Cookie is running the show before the showcase. It’s all come down to this. Andre goes to Lucious and says there’s “blood in the water at Empire.” People are leaving left and right. Teri calls Andre while he’s talking to Lucious, but he ignores her. Lucious asks Andre about Teri. “Maybe I’m cursed,” Andre says. Now that Quincy’s out of prison, Andre doesn’t want to bring danger into Quincy and Teri’s lives. Lucious wants Andre to have some happiness after all the heartache he’s suffered. Later, Andre goes to the beach to see Quincy and Teri. “I’m a dangerous man, Teri,” Andre warns. “Are you willing to take the risk of being around me?” She definitely is…

Hakeem apologizes to Tiana for what he put her through. “Maybe we’re just not good for each there,” Tiana says. Hakeem wants to make things right. “We may not be good for each other, but we can be good to each other,” Hakeem replies. Hakeem tries to hug her, but she pushes him away. Hakeem goes to see Blake to officially put their beef to bed. Blakes stresses that nothing ever happened between him and Tiana. Both Blake and Hakeem want to bury this feud once and for all.

Kingsley continues to cover himself and frames Becky. He kicks her out of Empire. When Lucious finds out that Kingsley is pinning this data mining on him, he can’t let it go. This is his reputation. But Kai uncovers other not-so great information about Lucious. He’s buried a lot of information about his artists — good and bad. Jamal asks him not to run this story. “If I don’t release this story, I’m going to end up resenting you,” Kai says. He agrees to hold off on the story, but he wants to take a break from Jamal.

Lucious is a no-show at the showcase, so Cookie starts without him. Blake comes out with Hakeem and Tiana to perform for Lyon Family Management. Their performance is epic. Lucious goes to Empire and beats Lucious to a bloody pulp. Before Lucious kills Kingsley, Giselle tells him that Kingsley is his son. “You wanna hit me again, dad?” Kingsley quips. Lucious goes to see Kingsley’s mom, who is now awake. Lucious doesn’t recall ever having slept with her.

Lucious comes back to the showcase and wants to talk to Cookie, but she’s preoccupied with the showcase. They’re getting sponsorship deals worth $30 to $40 million. Giselle shows up and tells Lucious she can get Kingsley out and get the Lyons back running the company. All she asks is that she be partner. “We’ll think about it,” he says. Cookie reveals to Lucious she sold the condo for $5 million. “I’m all in with you. Every step. Every penny,” she says. Oh, Cookie’s about to be blindsided.

The entire Lyon family hits the stage, and Kingsley shows up out of the blue all bloodied and bruised. He calls Lucious “dad” in front of everyone and tells them all the whole story. Apparently, Tracy tried to introduce Kingsley to Lucious years ago, but that didn’t happen. That was the last time his mom was sober. Upon hearing the news, Hakeem and Jamal walk off stage. Cookie looks at Lucious like she wants to kill him. Andre walks right up to Kingsley and says, “I’m gonna end you.” Kingsley claps back, “Not Unless I end you first, baby bro.”

Flash forward to three months later, Cookie is screaming to save her son. The person on the stretcher dying? ANDRE! Cookie is hysterical. When Lucious tries to pull her back, she screams, “Get your hands off of me!” Andre has no pulse and begins flatlining. Is he the one in the coffin?!

South Korea is obsessed with beauty. Some women want to change that
World News