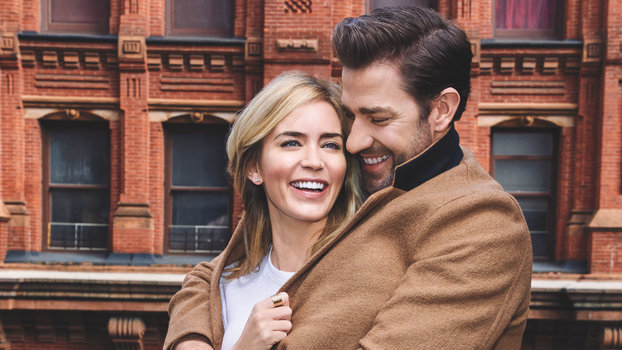 If you were to try and list the people who define “relationship goals” in the realm of A-list couple-dom, you’d be hard pressed not to include Emily Blunt and John Krasinski. It’s just an objective fact at this point that what they have is special, even by glitzy Hollywood standards — and now, there’s a disgustingly adorable photo shoot to prove it.

The two are on the cover of The Hollywood Reporter this week, and they spilled details of their romance while simultaneously turning out holiday card-worthy photos that we’d gladly hang on our fridge.

While the couple can’t seem to agree on who asked whom out first — each insists it was them — they did agree on details of their first night out together, which is remarkably reminiscent of Netflix & chill.

THR describes their first date as a night of pizza in Krasinski’s West Hollywood apartment, though that’s where the look into their lives ends. “It’s so precious, I don’t want to talk about it. Is that all right?” Blunt eventually said, after calling Krasinski the affectionate nickname “Kras.” (We should be less surprised by the nickname, but still.)

2018 has been a big year for both of them, between film projects, including A Quiet Place, which they worked on together — though that wasn’t always the plan. Blunt initially recommended a friend for the part, but when she actually sat down and read the script, everything changed.

“I went sort of gray,” she said. “I couldn’t imagine the thought of letting someone else play the part.”

Krasinski was, predictably, delighted by this.

“It was like she was proposing to me,” he said. “It was one of the greatest moments in my career. I screamed out, ‘Yes!’ I’m surprised we didn’t emergency land in San Antonio.”

Their shared enthusiasm for the project helped propel it to much success, which is a relief considering Blunt bent her own acting rules in order to sign on in the first place. “I have a minimum of a five-month rule between projects, other than A Quiet Place,” she said. “I broke the rule for him and him alone.”

This is what we mean when we say “couple goals.” Tinder matches, take note.