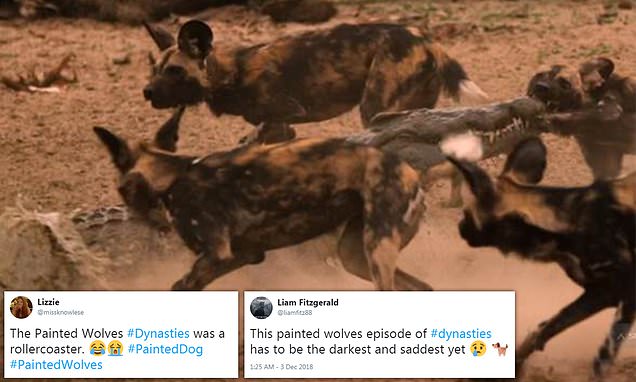 Animal lovers have been left distraught by ‘brutal’ scenes in David Attenborough’s Dynasties that culminated in the death of two baby wolves.

Last night’s installment of the groundbreaking BBC One documentary followed a painted wolf named Tait, matriarch of one of the last great families of the endangered animal.

In the brutal fight for survival in rural Zimbabwe, two of her daughter’s young were brutally killed off in separate scenes that left one viewer a ‘blubbering wreck’.

Barely half an hour into episode four, a young pup was picked off by a pack of hungry hyenas and ripped to shreds before mother Blacktip’s eyes.

And just ten minutes later another upsetting scene saw a crocodile lunge out of the water and drag another pup down with it. 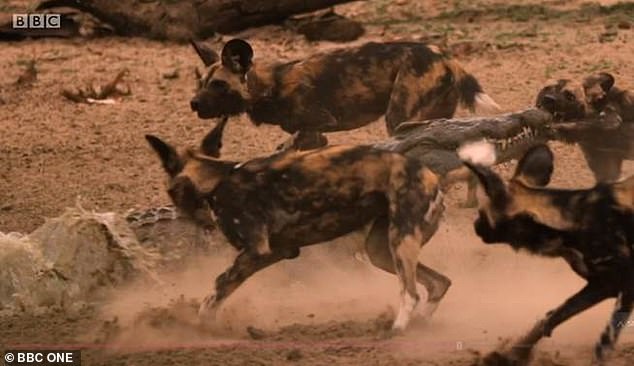 A distressing scene in last night’s episode of BBC One’s Dynasties which saw a hyena ambushed and killed by a hungry crocodile. The attack proved too much for series director Nick Lyon to bear and caused him to vomit, according to the Telegraph 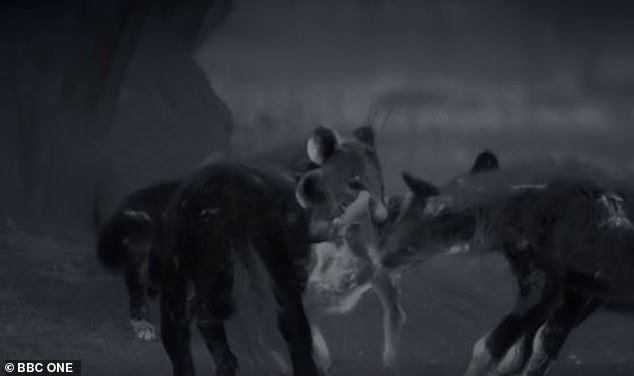 Brutal: A young pup is picked off by a pack of hungry hyenas and ripped to shreds before mother Blacktip’s eyes during last night’s installment of David Attenborough’s Dynasties

The distressing scenes caused uproar on social media, with fans flooding Twitter with a series of memes.

The crocodile attack proved too much for series director Nick Lyon to bear and caused him to vomit, according to the Telegraph.

He said: ‘When you follow animals for as long as we did, you get to know them and care what happens to them.

‘It becomes an emotional experience when you see one of the characters having a bad time, or having real success. I loved the puppies. 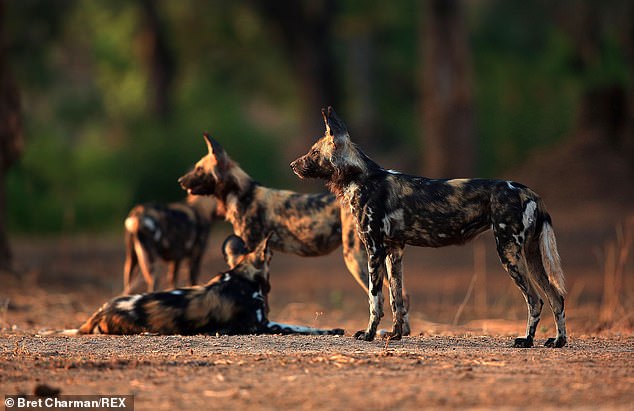 Emotional: Last night’s installment of the pioneering BBC One documentary followed a painted wolf named Tait, matriarch of one of the last great families of the endangered animal

Harrowing: Animal lovers have been left distraught by ‘sickening’ scenes in David Attenborough’s Dynasties that culminated in the death of two baby wolves

‘I remember when they were out of the den for the first time at just three weeks old. They were so tiny, with oversized heads that would cover-balance on their front legs.’

A third scene that saw the pack of wolves rip apart a young baboon also left some viewers upset.

Cameras spent two years following the painted wolves – also known as African wild dogs – on the banks of the Zambezi river in Zimbabwe.

Blacktip’s mother Tait had ruled her dynasty for many years on the banks of Zambezi, keeping the peace within her sprawling family.

But in last night’s episode, Tait’s power appeared to be waning as her old age led to rising tensions within the family unit. 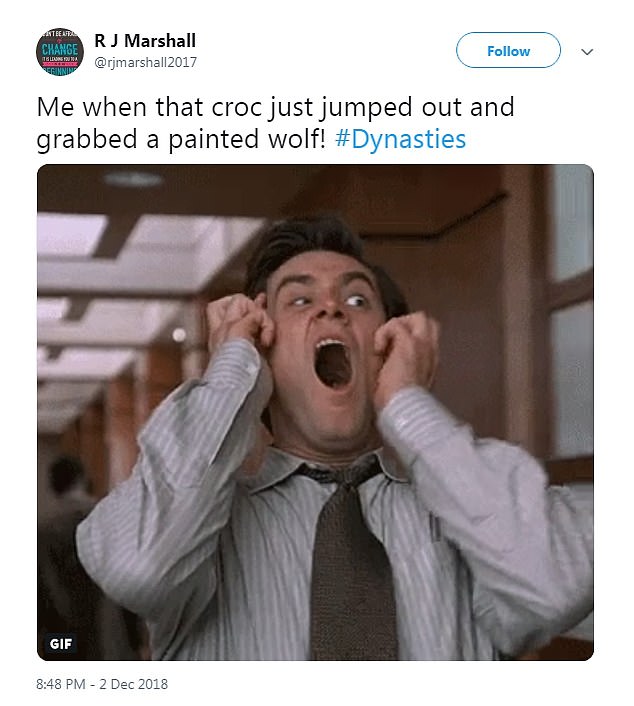 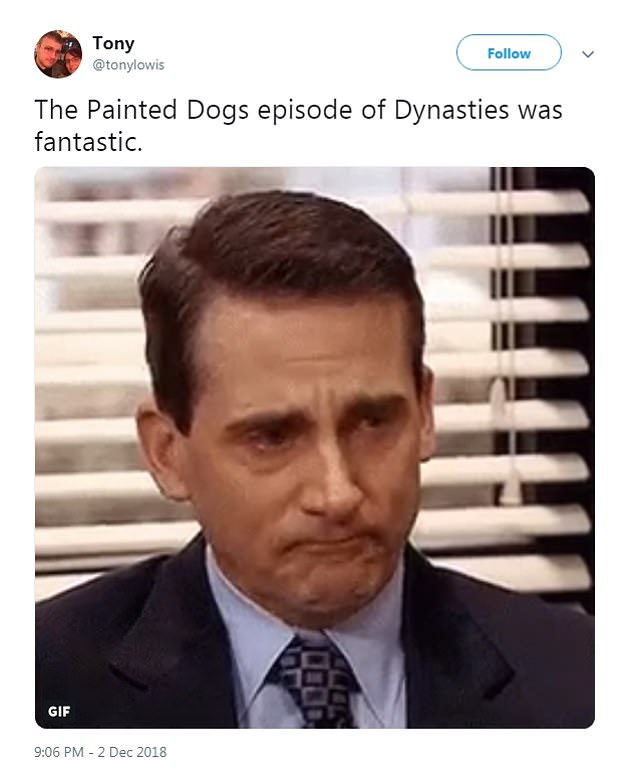 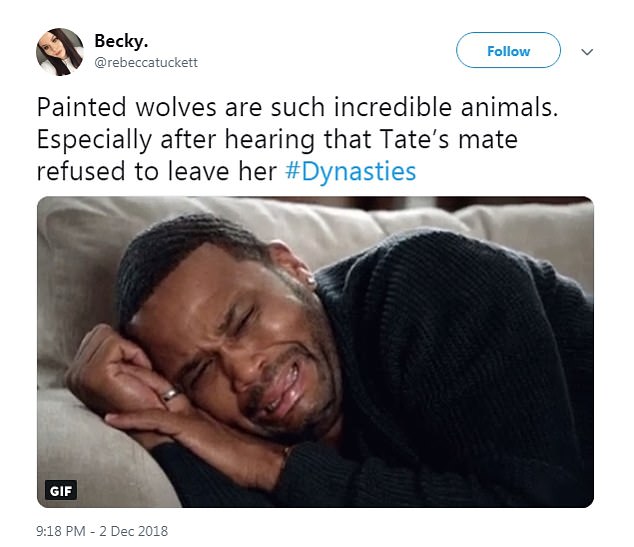 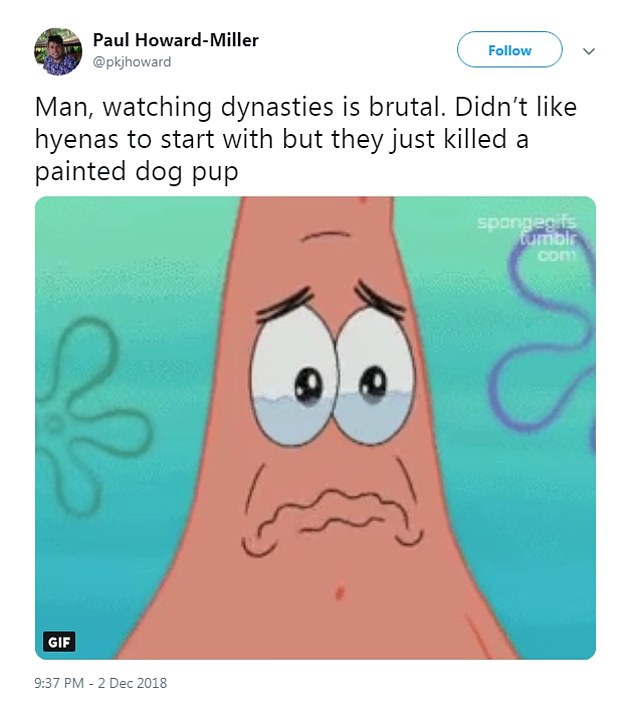 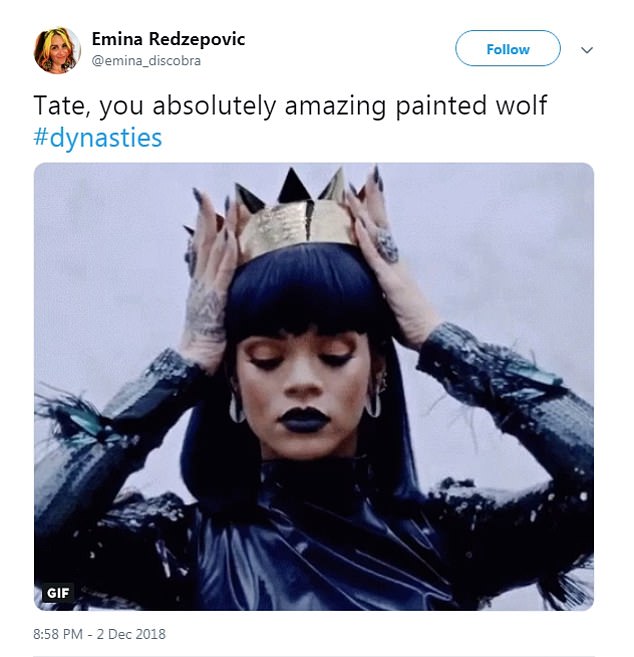 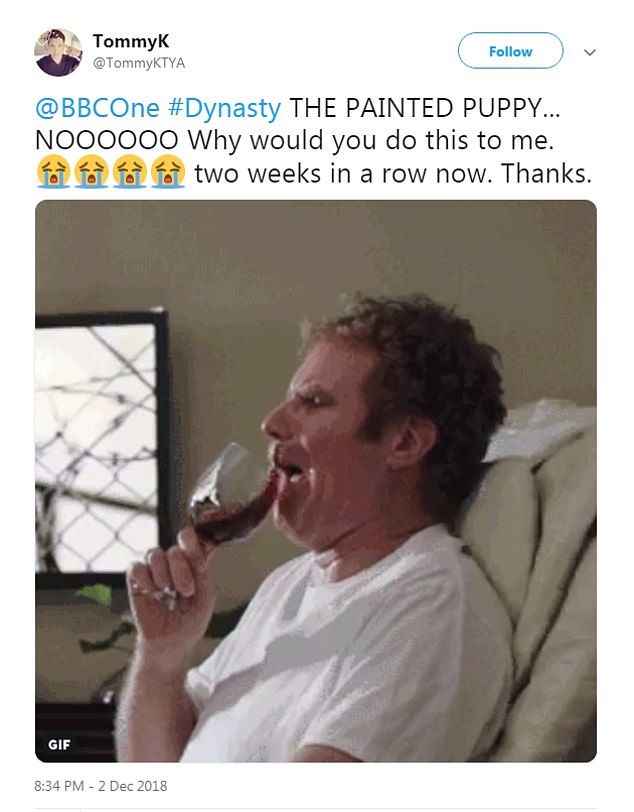 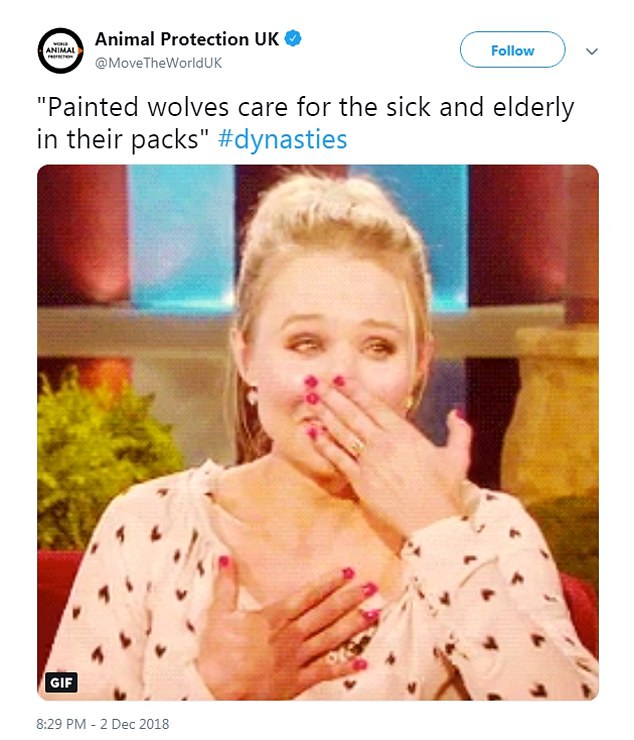 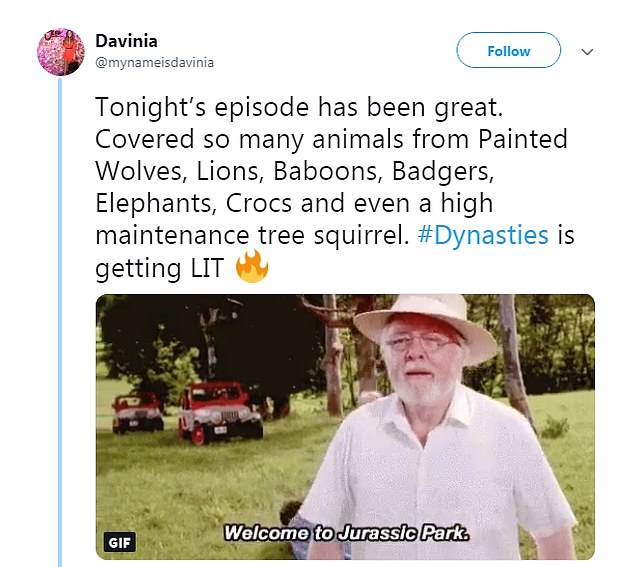 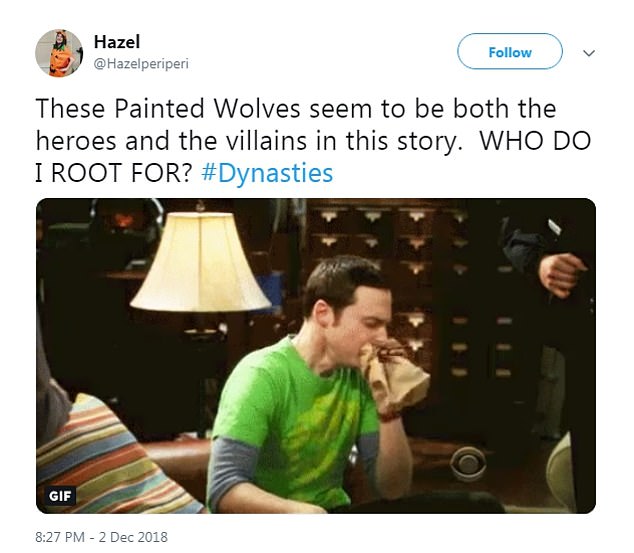 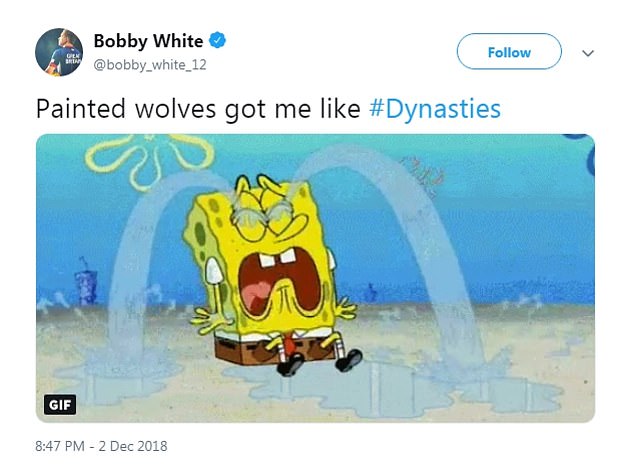 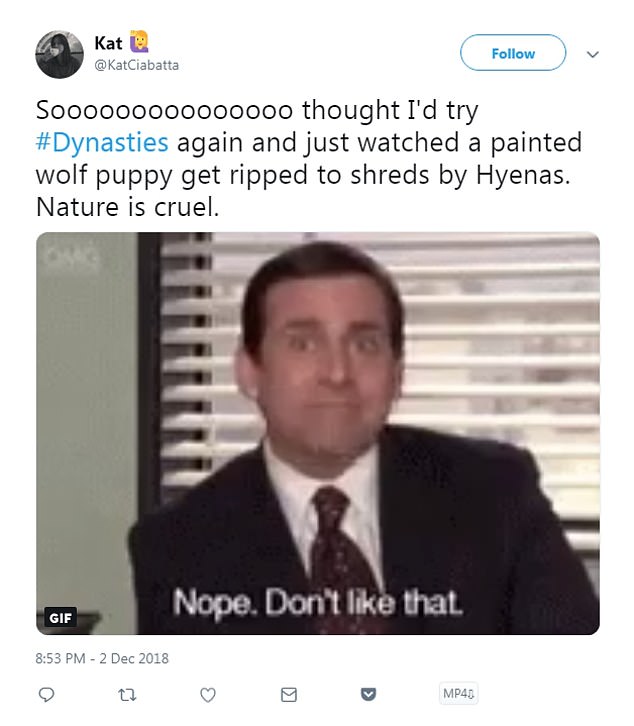 One of Tait’s daughters, Blacktip, lived close by with her own 30-strong pack growing fast and subsequently running out of space.

Blacktip urgently needed to get more territory so that her pack could catch enough food however, as producers discovered, she was hemmed in on one side by human lands and there was only one way to go to get what she needed – her own mother’s lands.

There are just 6,600 painted wolves left in the world, 280 of which are thought to descend from Tait’s bloodline.

But in a sad twist, Sir David Attenborough explained that the mother and leader of the pack of wild dogs had passed away trying to escape a pride of lions.

Dynasties is available to watch on iPlayer now