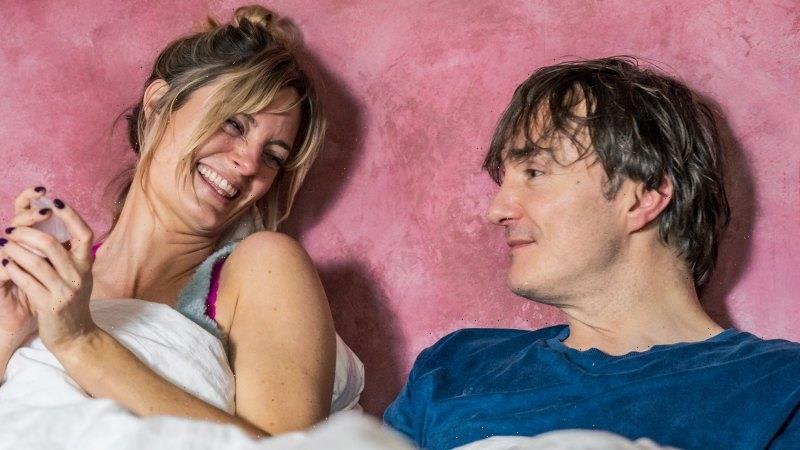 Dylan Moran returns to TV in this fast-paced marriage comedy

Dylan Moran as a grouchy, scruffy man-child facing a midlife existential crisis? Black Books fans will be excited, but in this fast-paced series (each episode is only 15 minutes long), Moran is playing a man with at least some interpersonal skills.

He’s Dan, a middle-aged advertising executive in a long-term relationship with Carla (Morgana Robinson, who played Pippa Middleton in The Windsors), who works in some kind of nebulous-sounding wellness business (a successful one, albeit). They’ve evidently been together for some time, but there’s little time for exposition here; we’re spared their backstory and thrown straight into the midst of this relationship. They are something of an odd match; she’s at least a decade younger than Dan, outgoing, and a bit of a kooky new-age type (although it’s Dan who’s the vegan in the relationship) and he’s more weary and snarky. More … Dylan Moran. 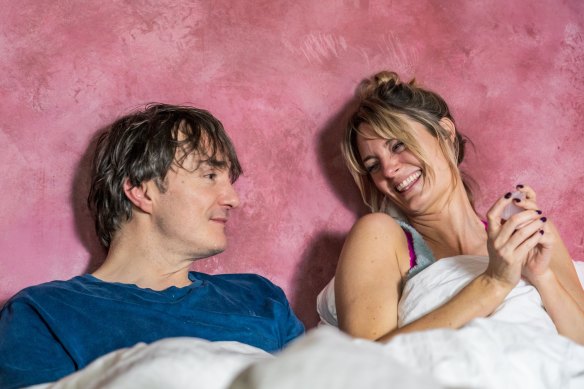 Dylan Moran and Morgana Robinson play a couple in a long-term relationship in Stuck.

But they kind of make a believable couple as they bicker good-naturedly in the way anyone in a long-term relationship will recognise, with in-joke shorthand and gags about Dan’s age and burgeoning man-boobs. They seem happy, but Carla thinks it’s time they got a nicer flat and possibly even have a baby – or at least get a cat. But Dan, despite his age, is seemingly in no hurry.

And then Carla’s plans look to be scuppered when Dan loses his job at the advertising agency. He was once a hot-shot in the business, but as his boss tells him, “that was a long time ago”. Finding himself suddenly unemployed at 50, Moran schleps around half-heartedly in search of a job, and entrusts his doctor mate Pete (Peaky Blinders′ Neil Maskell) to try and double his severance pay in poker games, while begging Pete to prescribe him some “happy pills”.

Meanwhile Carla’s job is suddenly a lot busier, thanks to some kind of lifestyle quiz. She works for Joy (Juliet Cowan), who, despite her wellness brand and her German lifestyle coach husband Kurt ( Clemens Schick), is mostly a jittery mess. Dan, wary of Kurt, nonetheless attempts to follow some of his self-help online videos, in which he appears in front of a blue sky wearing a polo-neck jumper and an earnest expression. Kurt is a highlight of the series. 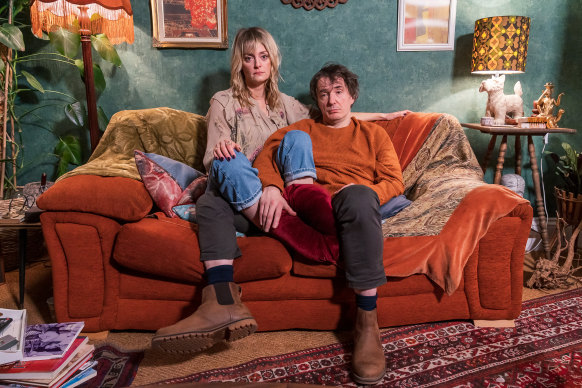 Robinson and Moran make a believable, if slightly mis-matched couple.

Then Carla’s ex Maya (Eleanor Fanyinka), a glamorous, successful singer, shows up out of the blue. Suddenly Dan, who has taken to moping around the flat in his underwear eating junk food, too lazy to cook dinner, takes notice.

For a series of only five short episodes, there’s a lot going on in what are really little vignettes rooted in the quotidian; while Stuck is very much Moran’s signature style (he wrote the entire series), it’s more traditional marriage-based sitcom than Black Books.

Aside from a scene where Dan and Carla smoke a spliff and go shoplifting (wearing nothing but matching trench coats) at their local overpriced organic deli, there are few moments of surrealism – and not quite enough of the black humour and the melancholic ennui to make either Dan or Carla endearing enough to care too much. It’s great to see Moran back on TV though, and fans of his standup will likely love Dan.

Stuck is now streaming on SBS On Demand.

Reward your time with these TV shows

Best known for her leading roles in box office smashes like The Hunger Games, X- Men movies and Silver Linings Playbook, Jennifer Lawrence has returned to her austere Indie roots in Causeway, a movie about a soldier recovering from a brain injury.

It’s the Australian movie that has attracted tens of millions of global views on Netflix, critical acclaim and a little bit of controversy. Joel Egerton stars in The Stranger, an art-house film with Australian muscle.

It’s easy to forget that James Corden, famous for helming The Late Late Show and singing with celebs in his Carpool Karaoke segments, is a serious actor. In Mammals, a TV series about a chef discovering secrets about his pregnant wife, serious is just the beginning.

Children are left in tears by 'Christmas Fyre Festival'