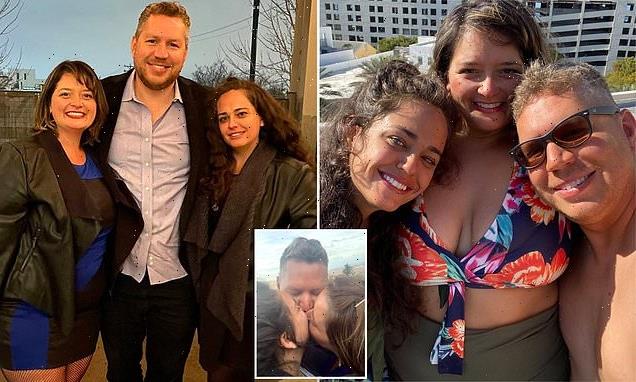 Divorcee who met her boyfriend on Tinder then formed a throuple with a woman from Bumble says polyamory has made her a better, more ‘sensitive’ partner – despite admitting that she is the ‘most jealous’ one in the triad

A woman who met her long-term boyfriend on Tinder after her divorce has opened up about how she then downloaded Bumble and found a girlfriend to join them, claiming that being in a throuple makes them stronger than a regular couple.

Operations manager Jessica Stakes, 39, from Colorado, met her boyfriend, graphic designer Isaac Hartsell, 44, back in January 2015. The two went for coffee and hit it off immediately, confirming their attraction.

‘Although we were very happy with one another, I had always expressed my desire to explore my bisexual side – especially after my divorce – which Isaac was always supportive of,’ she explained. 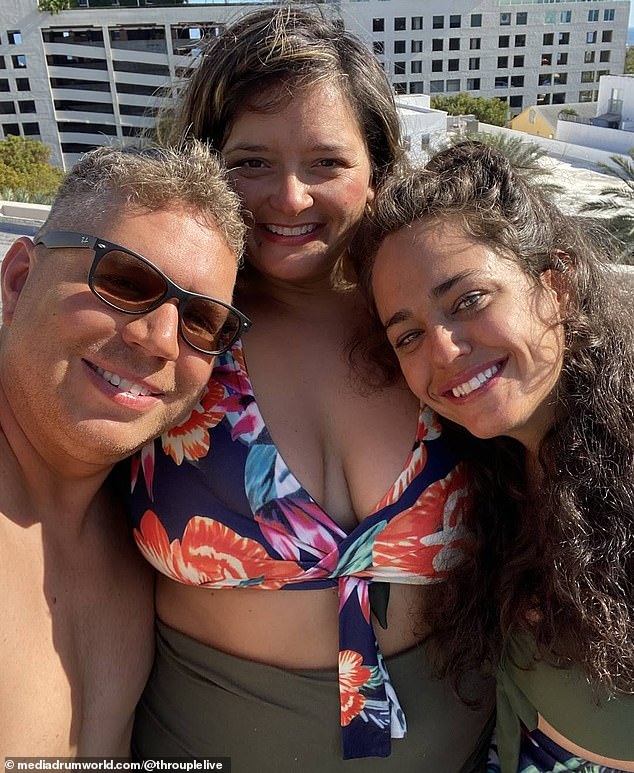 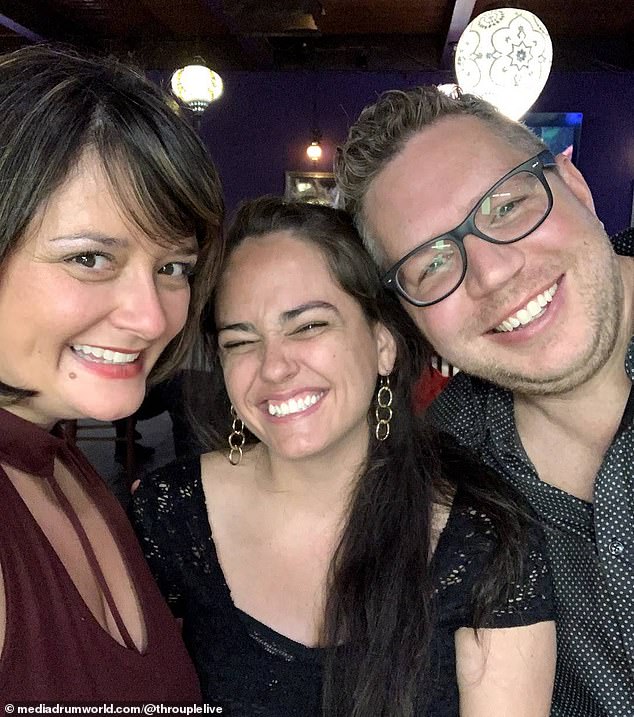 Memories: Jessica met Isaac back in January 2015, and he was always supportive of her desire to explore her bisexual side

‘We had never discussed what a true polyamory lifestyle would look or feel like, but I knew this was something I wanted to do.’

Jessica made an account on the dating app Bumble, where she met research leader Brandi Enrietti, 34, a divorced mother of two, in June 2019.

‘I knew right away that I needed her in my life – whatever capacity that meant, even if it was just as friends,’ she recalled. ‘I thought Brandi was sweet, gentle, and kind – she captured the essence of childlike innocence and I was besotted with her.

‘We remained friends for over a year, where we would hang out whenever we had the opportunity, but never took it any further than this.’

Jessica knew Isaac would also get along with Brandi, and she planned an excursion to introduce him to her ‘special friend.’

‘We went on a little getaway to Denver where we instantly felt magical chemistry. Everyone was giddy, just like how teenagers are and we become unsure of how to act around one another,’ she said.

‘We all vibed physically, mentally, and sexually and on this night, everything between us changed.’

They were all smitten with each other and became an exclusive closed triad after six weeks of dating.

‘For us, polyamory means opening up your heart and yourself, to find out who you truly are and just how much love you are willing to give,’ Jessica said.

She explained that her relationship with Brandi is like having her childhood best friend constantly around, where nothing is off-limits.

‘Dating a girl is completely different to my relationship with Isaac and I have really worked hard on being mindful of how I communicate, where I try to be sensitive regarding tough conversations and this has made me more self-aware,’ she explained.

Jessica also loves watching Isaac interact with Brandi, saying it’s a reminder of what a wonderful man he is. 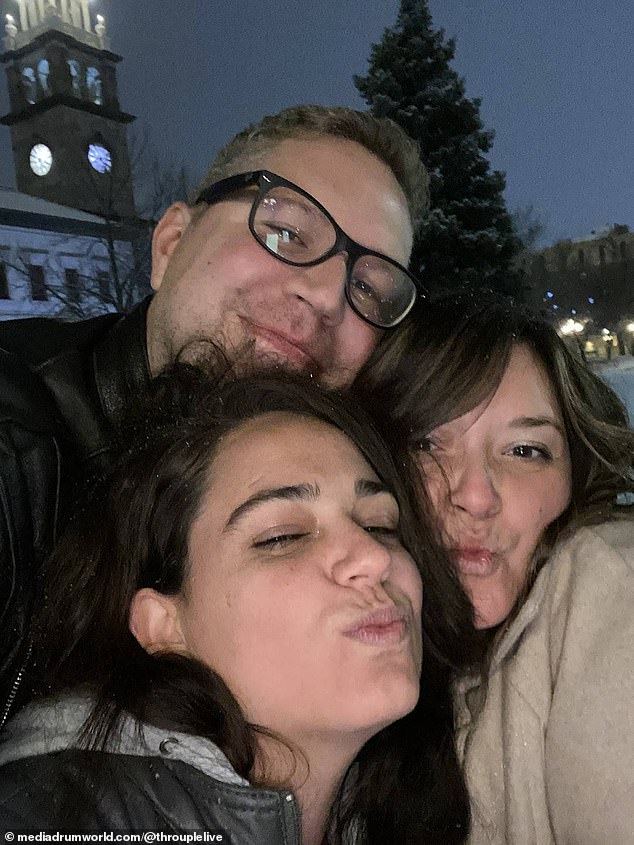 More than friendship: Jessica explained that her relationship with Brandi is like having her childhood best friend constantly around, where nothing is off-limits 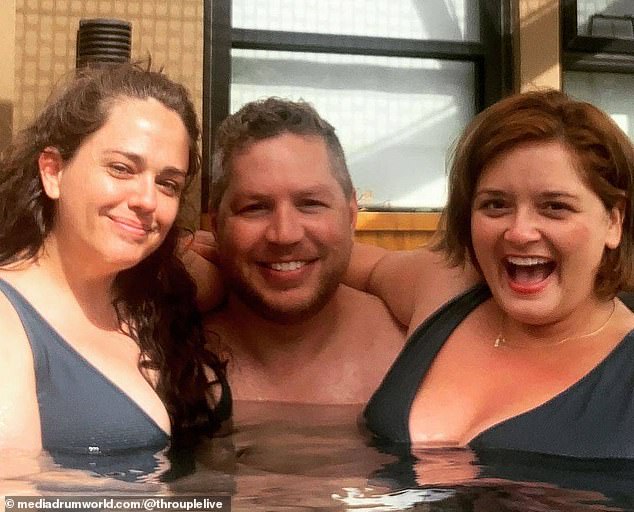 Happy: Jessica also claimed that watching Isaac with Brandi has made her love and appreciate him even more

‘Being in a throuple has made me appreciate and love Isaac even more, as seeing him love my best friend in a similar way to how he loves me and showing her how a good man treats his lady, is amazing,’ she said.

Despite this, she admitted that she is prone to jealously, and they have ‘faced some challenges along the way.’ However, she noted that these issues are ‘normal for a closed poly triad’ and nothing they can’t overcome.

‘It’s difficult understanding yourself and both of your partners, as well as trying not to let past triggers affect how you feel in the relationship,’ she explained.

‘We occasionally do get jealous of one another, but I get jealous the most. Brandi doesn’t really feel jealous towards us as she knows that myself and Isaac have been together for so long.’

Jessica said Isaac encourages her and Brandi to spend time together and even plans day trips for them, but it hasn’t always been easy.

‘Sharing Brandi with Isaac is hard, as I knew her first and developed such a deep connection,’ she said. ‘In the beginning, watching Isaac and Brandi grow closer was painful.’ 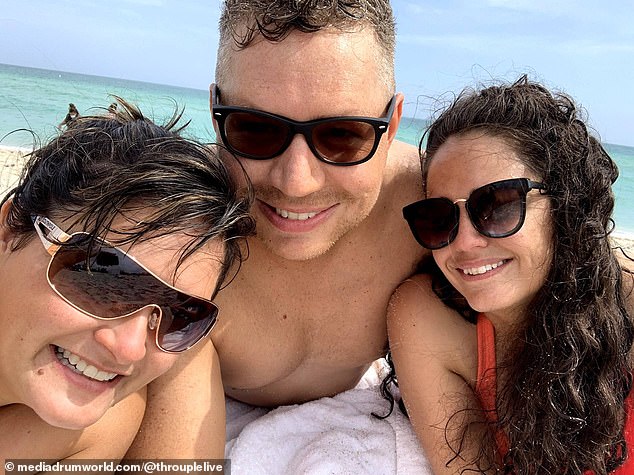 Candid: Despite their special bond, Jessica said they do struggle with jealousy from time to time 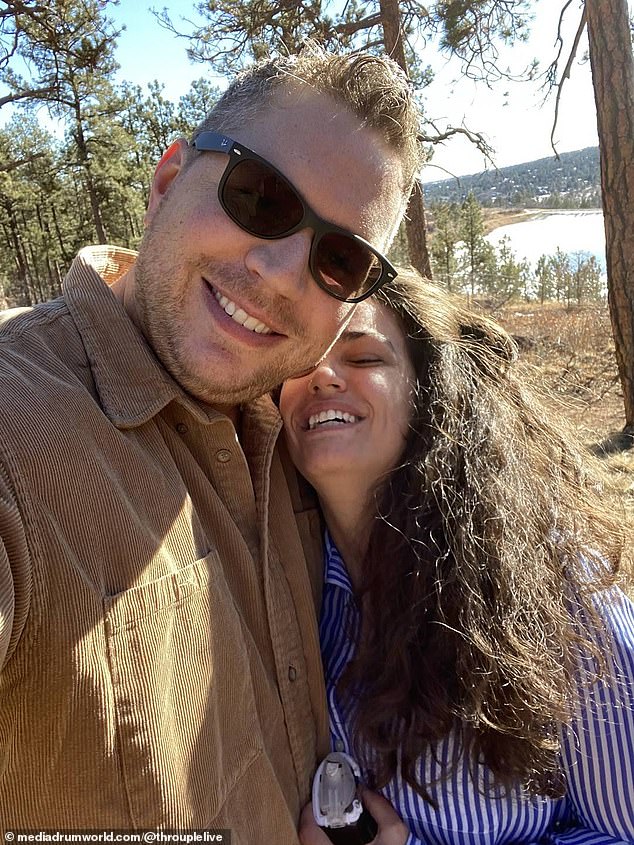 Working it out: Jessica admitted that sharing Brandi with Isaac has been hard because she knew her first 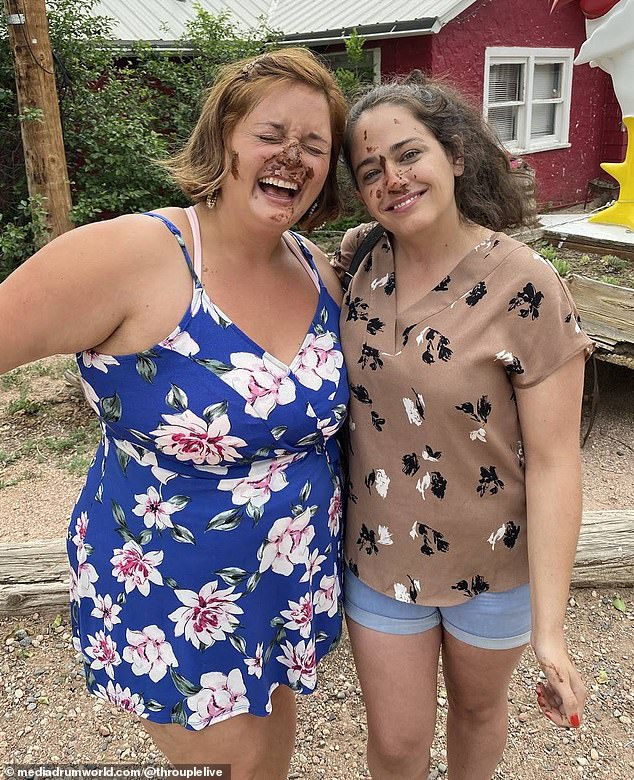 Alone time: Jessica said Isaac encourages her and Brandi to spend time together and even plans day trips for them

Jessica credits their ‘strong bond’ for making it easier to move past their struggles and form a united throuple.

‘The energy we all bring feeds off each other positively because we have all learned that no one is trying to intentionally hurt anyone,’ she said.

‘We balance each other’s weaknesses and accept each other’s imperfections – lots of talking and some therapy has helped us to get where we are today.’

They believe having friends who are also in polyamorous relationships has offered them invaluable advice and perspective that has helped them to understand their dynamic better.

As each of them has gone through a divorce prior to their polyamorous relationship, marriage doesn’t appeal to them at the moment.

Jessica and Isaac haven’t introduced Brandi to all of their family and friends just yet, but everyone who knows has been extremely supportive as they love seeing how happy Brandi has made the duo.

‘We introduced her to Isaac’s sister, Jeanie, who thought she was beautiful and sweet,’ Jessica said, adding: ‘I’ve just told my co-workers, friends and a few cousins who have all accepted us with no judgment, which is a breath of fresh air.’ 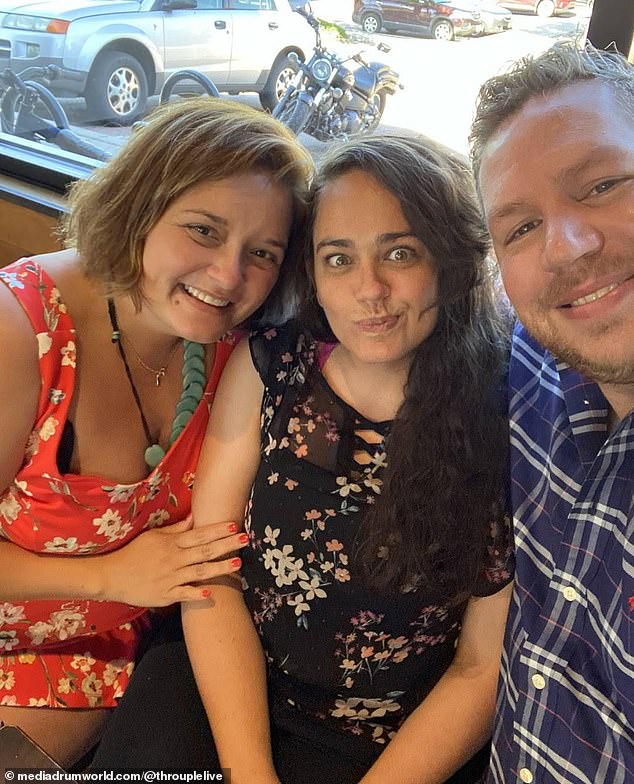 Honest: Jessica has yet to tell her nine-year-old son Jake about their polyamorous relationship, but Brandi recently came out to her ex-husband and two children: Vincent, 14, and Victoria, 16, 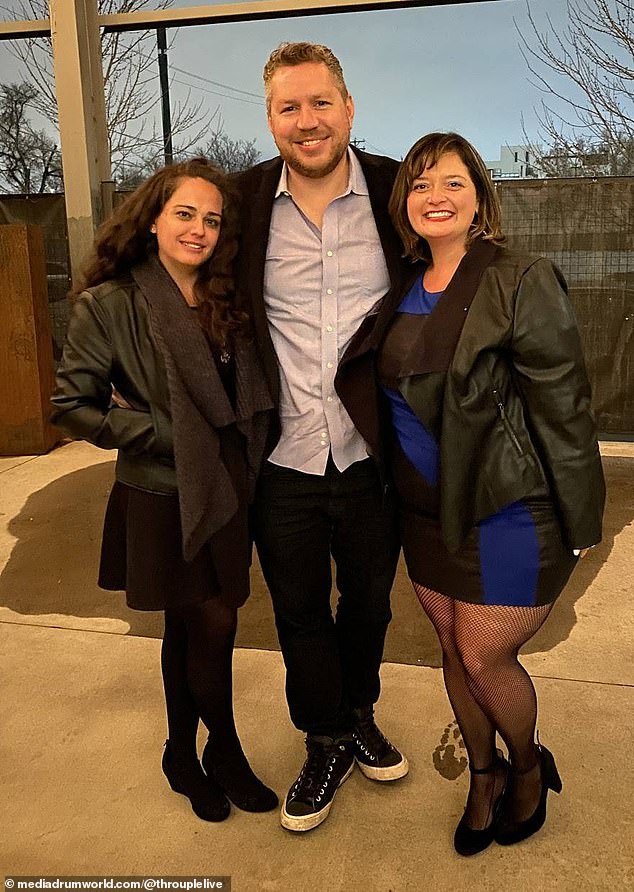 Love: ‘If we’ve learned anything from being a throuple, it’s that we’re stronger together and that we can achieve a lot more as a big, happy, poly family,’ Jessica said

While her son Jake, nine, doesn’t know about their relationship yet, Brandi recently came out to her ex-husband and two children: Vincent, 14, and Victoria, 16.

‘We’re all enjoying this new phase where we feel like a family and the freedom to be our authentic selves has been overwhelmingly great,’ Jessica said.

The trio loves to spend their time cuddling, laughing, and holding hands – even while doing mundane tasks. They all feel that having two people by their side has made even the most boring things in life seem enjoyable.

‘We’ve had a few comments from people on the street such as, “I can barely handle one girl” and “I could never share” – but overall, everyone is very supportive and we get lots of thumbs-ups,’ Jessica said.

However, she noted that she wouldn’t recommend a closed triad for people who haven’t been married before because it’s ‘extremely challenging.’

‘I believe the tools we have learned throughout our failed relationships have made us stronger and we have less insecurities as we have had time to work on ourselves,’ she explained.

‘Being in a throuple can be tough, as you have to be open, honest, and caring at all times. However, it can be extremely rewarding as it’s loving and nurturing.

‘If we’ve learned anything from being a throuple, it’s that we’re stronger together and that we can achieve a lot more as a big, happy, poly family.’

CategoryLifestyle
Tagsboyfriend Divorcee Met on Who

'The Pioneer Woman': Ree Drummond's Daughter Alex Revealed She 'Relied a Lot' on Her Mom for Wedding Planning