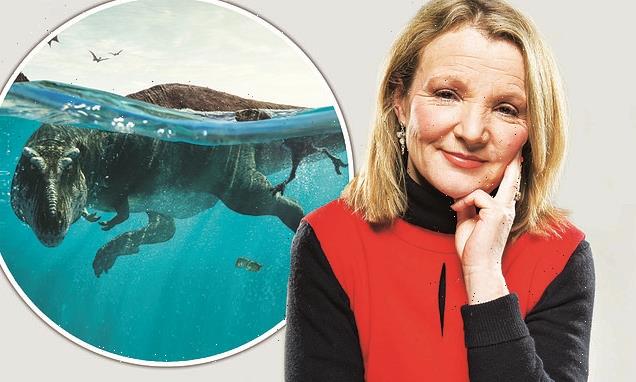 DEBORAH ROSS: Astounding! And who knew baby T. rexes were so cute?

Astounding! And who knew baby T. rexes were so cute?

State Of The Union

In idle moments – of which I have many, being an idle sort of person – I wonder where I would go if I could invisibly observe a period in history.

I wouldn’t mind witnessing the Big Bang and the moment of creation, but it worries me: would I have anywhere to watch it from?

I could live in a bustling Roman city, which would be neat, or how about hanging out with Jesus to see if he’s all he’s been cracked up to be? 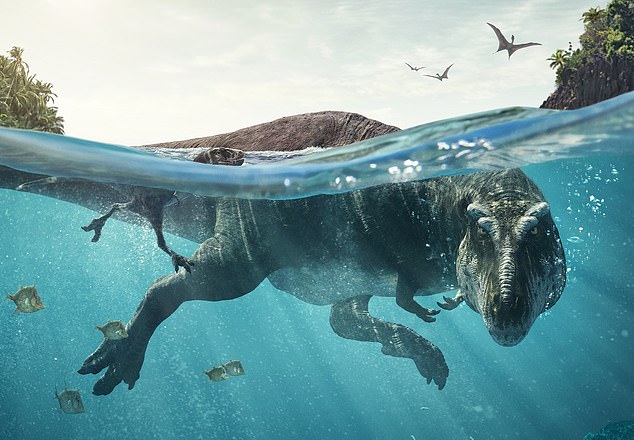 Prehistoric Planet is so breathtaking that I (Deborah Ross) often had to pinch myself to remember it wasn’t real. Above: Tyrannosaurus rex

The list is, in fact, endless – watching Stonehenge being built and definitively understanding why? – but what I always come back to is… dinosaurs.

To go back 66 million years and be amid what is essentially our landscape and see dinosaurs first hand, that’s the one. It’s so mind-blowing that they even existed.

There were colossal monsters everywhere. And some of them had such silly little arms! Yet all we ever get to see is the odd bone in a museum. So that’s what I’d do, or would have done.

I don’t know if it’s necessary now, as Prehistoric Planet absolutely transports you there. It is so breathtaking that I often had to pinch myself to remember it wasn’t real. I have quite the sore arm.

It’s made by Hollywood actor and director Jon Favreau, in conjunction with Mike Gunton of the BBC’s Natural History Unit, and is narrated by David Attenborough, but it isn’t on the BBC (alas) because, presumably, Apple TV+ funded it. 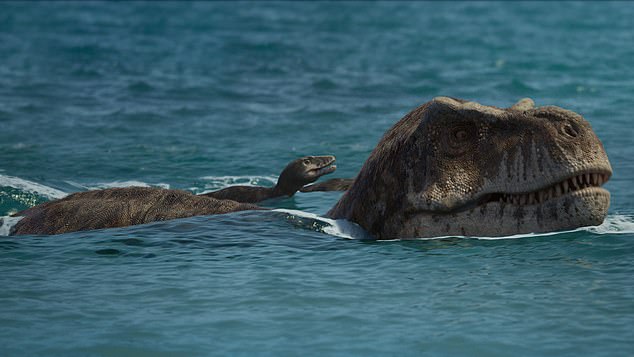 Who knew baby T. rexes (above) were so cute? Thought it’s created with CGI, every detail in this documentary series is extraordinary and astounding

Attenborough, meanwhile, had to be convinced that this wasn’t a Jurassic Park-style venture, that it would all be based on science, before he would take part.

When he saw the first reels, he said: ‘Mike, I can’t imagine it could be done any better.’ Attenborough is now 96, but he introduces each episode with such excitement he could be eight, maybe nine.

It’s created with CGI but every detail – every feather, every eye, every scaly bit, every inch of silly arm – is extraordinary and astounding.

It kicks off with Tyrannosaurus rex, which you’d imagine had the silliest arms of all, but later we will meet carnotaurus (episode five), which has just as silly arms, and which the male uses to put on a sexy dance for the ladies.

Anyway, back to our Tyrannosaurus, which is swimming in the sea with several babies in tow – who knew baby T. rexes were so cute? – when a mosasaur, a giant marine lizard, rises from the deep in a Jaws-like manner to snatch one.

Having Attenborough on board is genius, because his narration not only provides authority but it also could, say, be a lion bringing down a gazelle in the Serengeti. It genuinely feels like any other nature programme.

There are the big hitters including, most memorably (to my mind), the pterodactyls, which had bat-like wings stretching from finger to ankle yet walked on all fours when on land – it’s the weirdest thing ever. Or the titanosaur, with bellows in its neck that inflate like strange lightbulbs.

But there are plenty of lesser-known ones, and little ones hunting in packs – beware those bees, little ones – and it is all narratively immersive.

Will the lost baby triceratops be found by its mother? Will the carnotaurus impress with his sexy arm dance? (No. Not this time.)

Across the five nights there may be an over-emphasis on killing – it’s very much a dinosaur-eat-dinosaur world out there – and Hans Zimmer’s score is itself sometimes heavy-handed.

The programme-makers say they extrapolated behaviours from any nearest living descendants (birds, mostly), so we’ll just have to settle for that, and settle I will. I can’t imagine it could be done better.

The first series of State Of The Union, written by Nick Hornby and directed by Stephen Frears, was a run of ten ten-minute episodes focused on a married couple (Rosamund Pike and Chris O’Dowd) meeting in a pub ahead of their weekly counselling session. 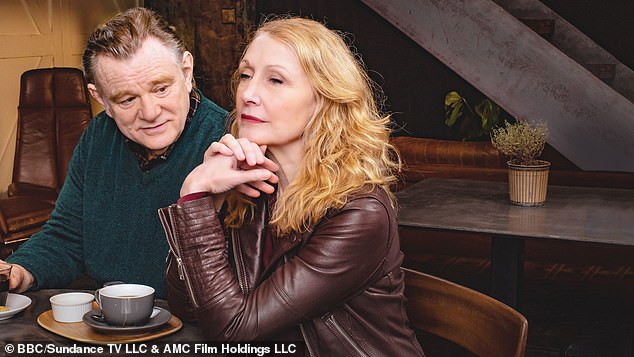 The second series of State Of The Union has been transposed to America and features a new, older couple: Scott (Brendan Gleeson) and Ellen (Patricia Clarkson, above with Gleeson)

The second series adopts the same format but it’s been transposed to America and features a new, older couple – Scott (Brendan Gleeson) and Ellen (Patricia Clarkson) – who meet for coffee before their therapy session.

The first series was terrific, but this? Not so much.

He wants to spend his retirement playing golf, fishing and watching war documentaries. She is into yoga, has discovered activism and seeks spiritual nourishment. He is so oblivious that he’s stunned she’s asked for a divorce.

True, couples grow apart, but these two are so apart you can’t root for them to stay together as you did for Pike and O’Dowd.

All episodes have been made available, and while Scott has the biggest arc, he is certainly a stock character at the outset. He is also a kind of dinosaur, you could say, given he rails against ‘woke’ culture (tiresomely, in my opinion).

But as they bicker, flirt, snipe and tease, there are some brilliant lines. When she says he’s talking from ‘a place of anger’, he rails: ‘I was born in 1950! I don’t have a place for anything!’ Just wish I could have rooted for them more, is all.

'These are the questions you ask?' – Furious Toni Kroos storms out of interview after winning Champions League final
World News