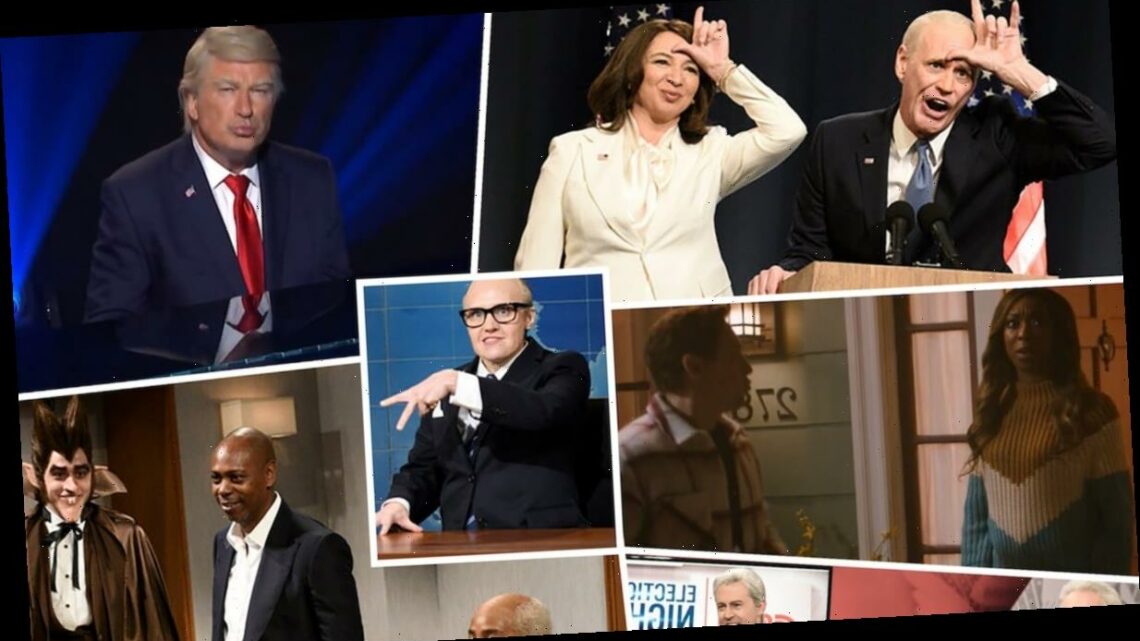 With Joe Biden declared the winner earlier in the day, you just know there was a mad scramble on “Saturday Night Live” to adjust to the news. Emotionally, it was clear the cast was riding high as the night progressed.

Dave Chappelle was the perfect host to usher in this new era for the nation and the show. Of course, Alec Baldwin dropped by, for what’s sure to be one of his final appearances as Donald Trump, while Jim Carrey and Maya Rudolph are just getting started as the new president-elect and vice president-elect.

Maya and Alec were clearly having a blast, with both of them appearing again as the night progressed. But mostly it was a night defined by a long and pointed stand-up monologue by the host and a barely-contained manic energy permeating through every sketch.

There were probably more breaks tonight than at any point this season. Part of that is surely the election news, but there’s also the fact this was their sixth new episode in as many weeks — a new record — and they’re probably about to crash hard.

Once again, there was absolutely no sign of either Aidy Bryant (filming her own show in Portland) or Cecily Strong (shooting a series in Vancouver), though both remain in the opening credits. Also absent from sketches tonight were Chris Redd and all three newcomers, Andrew Dismukes, Lauren Holt, and Punkie Johnson.

Even with all those absences, about half of the remaining players only had one appearance on the night. Is it possible that this cast is just too big to manage this season? With the election season wrapping up, will they all stick around to finish up the whole season?

We could see Kate moving on sooner rather than later, while Aidy and Cecily already have one foot halfway out the door. But how about some of the long-term guys (other than Kenan) like Beck Bennett and Kyle Mooney, not to mention Colin Jost, Michael Che and even Pete Davidson?

As usual, we’re ranking all the sketches from worst to first, including the Monologue, Cold Open, “Weekend Update” and any sketches that were cut for time but made their way online. We’ll skip the musical guests, because they’re not usually funny — unless Ashlee Simpson shows up. We wrap up with a look at the cast-member who had the strongest week.

Stars React to Kamala Harris' Historic VP Win: 'You Have Made Herstory'

Viewers of a certain age were suddenly reminded of June 17, 1994 as Dave Chappelle and Ego Nwodim’s DC news anchors cut to footage of Trump having left the white house … in a white Ford Bronco. This after Dave talked about the legal challenges he’ll be facing once he’s no longer protected by the presidency.

Add a frantic 911 call from Don Jr., behind the wheel, and this was a quick hit, one-joke sketch that knew to get in and out quickly. Maybe Dave’s 16-minute monologue helped trim it down so much, but it was much better for being just a few minutes long. Sometimes that’s all you need to land your punchline.

The audience and cast was clearly thrilled by the election finally being called as they were putting this episode through its final paces. We love that Alec Baldwin echoed Kate McKinnon’s beautiful piano concession four years ago as Hillary Clinton by singing a treacly version of The Village People’s “Macho Man,” while Jim Carrey and Maya Rudolph kept it mostly in character, aside from a very Carrey-esque “Loo-hoo-hoo-ser!” moment at the close. Overall, though, they hit the main points of the moment with as much grace as you’d expect from a comedy show, and enough laughs and smiles to set the tone. 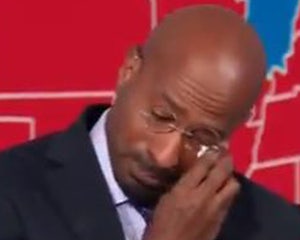 Van Jones Breaks Down In Tears Over Biden Win: 'Being A Good Man Matters'

A simple enough premise, well executed by all of its players, love was at the heart of this piece about hailstorm survivors. Kate McKinnon and Kenan Thompson perfectly played it as friends who found solace in each other’s arms, and then couldn’t talk about anything else. Kudos to a great twist toward the end, followed by another with news anchors Ego Nwodim and Alex Moffat. Just a solidly executed, sharply written nonsense piece.

A retrospective of “Super Mario Bros.” quickly got derailed when Mikey Day’s character shared the childhood story of Kyle Mooney’s character literally popping his nuts on his bike’s crossbar in their excitement to get the game. Kenan Thompson was the immediate follow-up, and he couldn’t even concentrate.

“It was like trying to put a watermelon back together after it was dropped off a ten-story building.” Nobody plays awkward discomfort better than Kyle and he was totally in his element as the root of everyone’s discomfort as this piece went on and Mikey offered more details absolutely no one was asking for.

The boys were jubilant as they got to report the aftermath of Biden being declared the victor in the presidential election, with Michael Che boozing it up and feeling so good he even revealed his tie was a clip-on. Why? Because he could, that’s why! There’s nothing funnier than Che loosening up, sipping a drink and riffing as Colin Jost tries to do his job.

Kate McKinnon’s Rudy Giuliani presented the Trump legal defense to losing the election, which included declaring Opposite Day in Georgia and suing every state he lost — for child support or manslaughter or something. Look, if he lost, then the results must be wrong, right? Because he’s said how many times he’s our favorite president. That’s just good math.

Once again, Kate struggled to keep it together, which set Colin off over and over, and then the lettuce flew. It’s just indicative of the overall mood on the show this week, which was an almost manic, barely contained jubilation that seeped into each live sketch. And while it can sometimes be distracting when the players struggle to get through their scenes, their joy was infectious this week and actually added to already strong material.

Why Matthew McConaughey Doesn't View Himself as a Victim After Molestation, Blackmail

At first, we weren’t sure we were on board with how Ego Nwodim was playing this, but by the end we were completely sold on this story of mismatched lovers as Beck Bennett tried to reconcile all of his past misdeeds with the new leaf he was turning over for her. It was over-the-top, but they both played it so straight — even as it veered into uncomfortably wrong territory. Everything about this was awful, and we kind of loved every bit of it.

As funny for its premise as the inability of anyone to get through it without cracking, Dave couldn’t keep it together with that deep voice he was putting on, and then broke character to spotlight Pete Davidson’s (as Count Chocula) big lips. The basic gist was this was the firings of Aunt Jemima and Uncle Ben for their racial representation, but somehow the All-State guy and Count got roped in. And can we say, the Count makeup work was both incredible and absolutely terrifying. Maya Rudolph and Alec Baldwin pulled double duty this week appearing in this sketch, and no — these pros couldn’t keep it together, either. 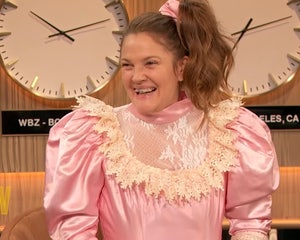 Dave Chappelle brought his A-game to this stand-up monologue, reminding us that we’re not ready for his truth unless he puts a punchline behind it. And so he packed this monologue with plenty of punchlines and plenty of savage truths about race, oppression (white people and their mask issues need not apply), and the state of the world today.

He even had praise for Covid, reminding us that in the pre-Covid world we were dealing with mass shootings every week. Remember that? He went in hard on the white people from his rural community, complaining about his comedy shows being too noisy in a corn field and not wanting to wear masks.

“I don’t know why poor white people don’t like to wear a mask. What is the problem? You wear a mask to the Klan rally, wear it to Walmart, too,” he said. Punchline following truth? You decide! He then compared Trump’s attitude toward masks and Covid to walking into a homeless shelter with a bag of hamburgers, eating them in front of everyone and saying, “Don’t let hunger dictate your life.”

And yet, it was a unifying set, with Dave sharing that he doesn’t hate anyone, he just hates that feeling that you’re a target, that no one cares about you, that all of those things he knows all too well as a black man in America, police officers and some white people are feeling now. We’re better than this. And we’re all in this together.

PLAYER OF THE WEEK

With fewer sketches than normal this week, the players really had to jockey for screen time — especially with both Alec Baldwin and Maya Rudolph appearing more than once on the night.

Interestingly, Ego Nwodim landed the most work, though she played it straight for the majority of her roles, including two back-to-back news anchors. Nevertheless, she was rock solid across the show.

Meanwhile, veteran rocks Kate McKinnon and Kenan Thompson were both stellar as the glue that still holds this ship together, including one of our last appearances (probably) of Kate’s Rudy Giuliani and Kenan sliding effortlessly into an Uncle Ben impression for a nearly off-the-rails hilarious sketch early on.

Mikey Day got to do some voiceover work as Don Jr. for the night’s final sketch, and definitely had fun bustin Kyle Mooney’s chops (or is that popping his balls) in the Mario sketch, but again, he played it mostly straight on the night.

Ultimately, this was a balanced week so we’re looking at those players who kept things moving and held it down, so this week’s edge goes to Ego, just slightly over Beck Bennett who was great as Wolf Blitzer and perfect opposite her in the hilarious “Take Me Back” piece.

Ultimately, though, Ego is really proving herself an actress on this sketch show, able to bring a variety of emotions to really well-thought performances with depth and believability. And on top of that, she can be funny with just one damaging facial expression.

Has Time Run Out for a Traditional Swiss Clock?

Chinese Horoscope: What is an Earth Rat and what year is it?
World News